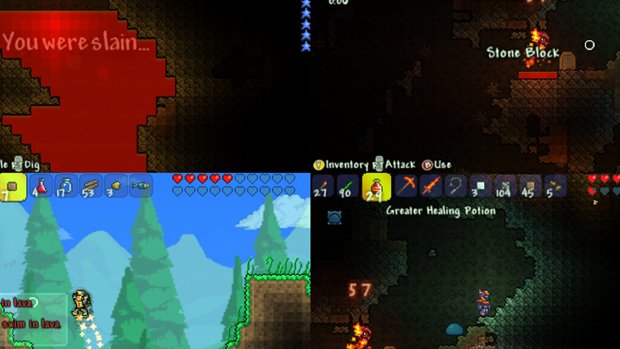 Hooray for local multiplayer, even when I won’t use it!

Some screenshots showing off multiplayer in the upcoming console version of Terraria have been released. They look like four little Terraria screens arranged in a box-like shape similar to what your television might enjoy.

I honestly didn’t think I was going to like Terraria when I first installed it. Then I think I blacked out for two days and, when I awoke, I’d built a house, populated it with strangers and was exploring lava-filled caves with a pickax and a grappling hook.

With that in mind, I don’t think I’ll be investing in the console release for another go-around. Local multiplayer isn’t much of an inducement in this case, though I’m glad it’s being included as a feature and it looks better than I thought it would. All the same, it’s a game where you come to really value being able to see as much as you can around you and that’s just not going to work with three other people hogging the screen’s real estate.