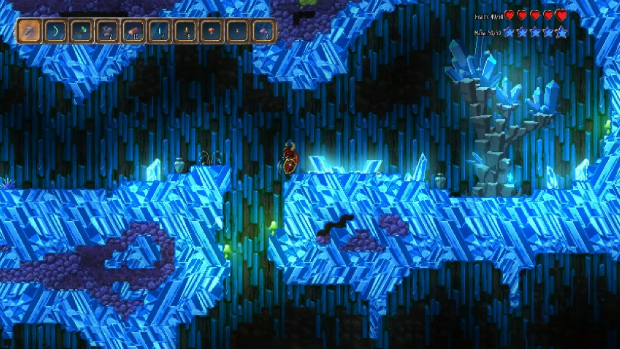 When Terraria: Otherworld was announced, it was difficult to tell from the trailer what makes it stand apart from its big brother Terraria or futuristic half-cousin Starbound. Developer Re-Logic’s description gave some insight, suggesting a stronger strategy component. I think I can see that in the trailer above, taken from GDC 2015.

Those weird monoliths we saw last time all have crystals powering their unknown functionality, and local creatures seem to want to destroy the structures, and the player can set up defensive turrets to protect them. The crystals look like they play a big role, with one section shown as an entire cavern made of the material. Watching closely, the machines appear to be expunging a purple tint from the land. Perhaps it’s like Terraria‘s Corruption, but with a more interesting means of removal.

We still need some more official details, but that’s what I see in the above trailer. Is there anything you think I got wrong or missed?