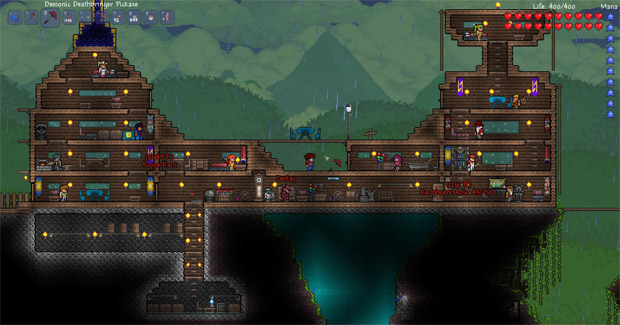 With Chucklefish’s Starbound looking to scratch that Terraria itch and then some, and Terraria itself getting further fleshed out with another big update, it caught me completely off guard to hear that Re-Logic is working on a sequel. Ecstatic to hear it, but unexpected.

While the original game started off on PC and that platform is primarily what I associate the sandbox world with, it did eventually come to other systems. Speaking to Pocket Gamer, designer Andrew Spinks said “I am wanting to code Terraria 2 in a more portable language so it can be released on multiple platforms at launch or close to launch.”

PlayStation Vita, iOS, and Android all got the title, but Nintendo’s handheld was left out. It sounds as if that’s going to be the case again. “3DS is something I was very interested in getting Terraria on but the system unfortunately cannot run Terraria the way it needs to be ran,” Spinks explained.