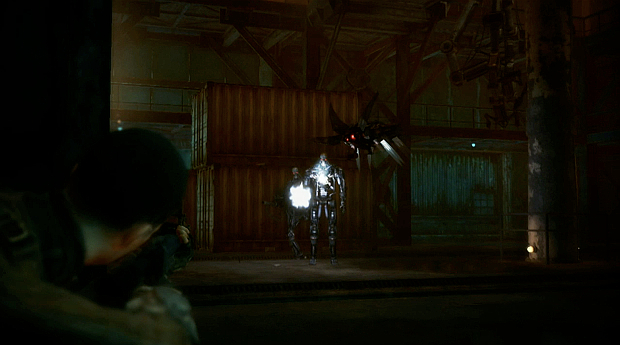 I didn’t think it was possible to kill a Terminator machine. Then again, I’ve never had the opportunity to play as a rebel against the Cyberdyne Systenms machine insurgency. Warner Bros. released an action montage trailer today for Terminator: Salvation that shows all sorts of robot destruction by the hands of a mere man. (You can view it after the break.)

It’s a good show, too. You’ll notice a prolific cover mechanic, not wholly unlike the one employed by Epic with Gears of War. The slippery protagonist of Terminator: Salvation must oil his pants every night before he rests his head on his stone pillow. Dude can really slide behind cement.

He can also blind fire and chuck grenades — very handy skills when trying to avoid the red-tinted targeting systems of bots. Check out all the insane action in the trailer — there’s even a school bus thrown in there for good measure — and tell us what you think. Will this be the next great motion picture tie-in title?