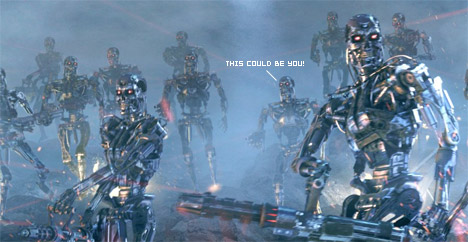 We already know a little about the upcoming Terminator Salvation movie tie-in being developed by GRIN Studios, but what about the possibility of a Terminator MMO? Could our feeble minds even handle such an awesome concept?

Halcyon Games, a subsidiary of The Halcyon Company who owns the rights to the Terminator franchise, recently hinted at the likelihood of an MMO set in the Terminator universe.

IncGamers spoke with Halcyon Games production executive Mic Rogers about the chance we would see such a project happen, and he replied, “You know what, it’s something we’ve looked at … and it’s an interesting space for sure.”

Yes, I fully realize a Terminator MMO may never come to fruition, but it’s interesting to daydream about. Being able to pick a side in the human vs. machine conflict would be potentially cool, at least in my mind.