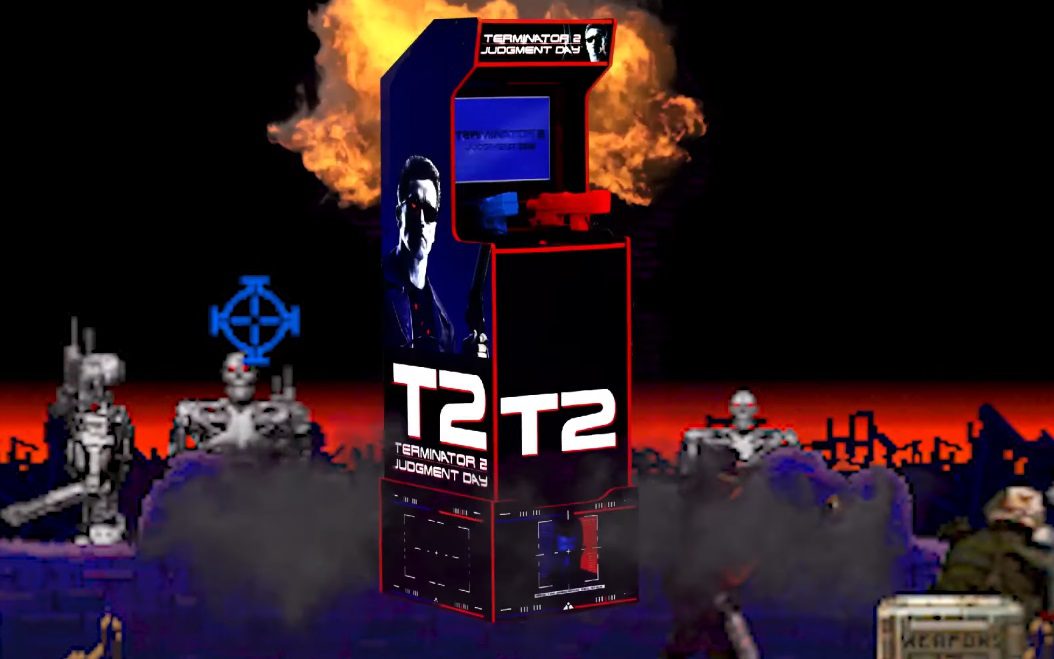 [Update: Pre-orders for Arcade1UP’s Terminator 2: Judgment Day cab are now live. The game will retail for $699.99 USD, and is expected to launch “postholiday” in Canada and North America.]

Arcade aficionado Arcade1Up has revealed the next classic replication cab joining its steadily growing range of old-school coin-ops. Heading to a hunched-shoulders game room near you soon is Midway’s smash-hit rail shooter Terminator 2: Judgment Day, based on the blockbuster James Cameron movie of the same name.

Released in 1991 amidst an absolute torrent of Terminator 2 merch, Midway’s rail shooter takes the action of the excellent sci-fi sequel and replicates it in a side-scrolling, rat-a-tat-tat format. One or two players battle through the dilapidated Los Angeles of 2029, before eventually traversing time and space to the early 1990s, where our heroic T-800s are tasked with protecting humanity’s future savior — the floppy-fringed John Connor, portrayed in the movie by Edward Furlong.

Terminator 2: Judgment Day is, honestly, a pretty brain-dead and completely skill-less shooter, but it does feature a great sound package, which includes digitized speech from actors Arnold Schwarzenegger, Edward Furlong, and Robert Patrick as the terrifying T-1000. The cabinet is also splashed in the delightful nostalgic T2 aesthetic — a tone and style that absolutely defined 1991, when T2 mania was running absolutely wild.

Fun fact: if you hit start without inserting a credit, Big Arnie says “No way, Jose.”

The original Terminator 2 cabinet featured fixed gun emplacements, much like classic Taito release Operation: WOLF, while the Arcade1Up cabs will instead feature wired lightguns, complete with sound effects and force feedback capabilities. The Arcade1Up cab will also feature a selection of interviews and making-of features, as well as a lighted marquee, optional riser, and anchor strap. Unlike previous Arcade1Up cabs, however, it appears that Terminator 2: Judgement Day will be a “one-game” cabinet — so it won’t even include Midway’s utterly atrocious 1995 Aerosmith shooter Revolution X.

If you fancy adding Terminator 2: Judgment Day to your Arcade1Up collection, then pre-orders go live on November 1.