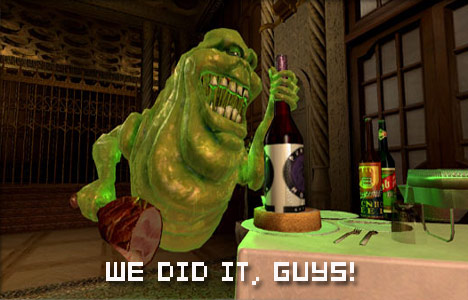 Lady Luck has a way of intervening at the most crucial moments, lending that extra hand that helps us through the tough times. On occasion, even developers are able to bask in her warming glow… just ask Mark Randel, president of Terminal Reality. While his team was nearly nine months into producing a licensed Ghostbusters game of their own (and looking to impress some suits with cash), along comes Zootfly to the rescue:

“What Zootfly did for us, inadvertently, is help sell the concept. When their footage came out, we were close to our green-light meeting, and when the executives saw the reaction from the fans, they immediately knew, ‘Hey, Ghostbusters is going to be a big hit – we need to put this game into production.'”

Fortunately for the Terminal Reality team, Lady Luck took the form of Zootfly this time. As for fans who were holding their breath while the game floundered in license purgatory — they let out a collective sigh, and started breathing again. Let’s just hope the finished product looks half as good as that test footage that helped make the game a reality in the first place.