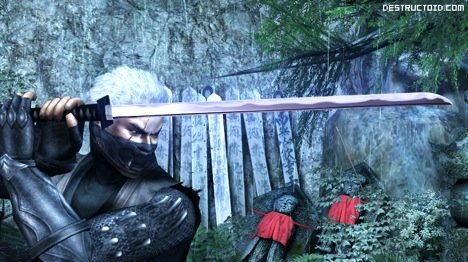 Today, Ubisoft announced Tenchu: Shadow Assassins for the PlayStation Portable. It’s a port of the fairly well-received Wii title with the same name.

I haven’t ventured into the Tenchu universe since the PlayStation One title, so you’ll have to excuse my naivety. That said, Tenchu: Shadow Assassins looks a lot like that version I played so long ago.

I guess you could compare it to a Twinkie at one of those slightly old bread stores. An old Twinkie still looks remarkably like a new Twinkie, despite being past the expiration date. The creamy filling, or the features, are still intact with Tenchu: You’re a silver-haired ninja, who kills the evil samurai of old Japan with stealth and a variety of weapons such as throwing stars, smoke bombs, and a trusty katana.

The game is due out this March and is developed by From Software and Acquire. (Yes, it has some new modes and features. Hit the break for the press release that lists them in bullet form.)

TENCHU®: SHADOW ASSASSINS SNEAKS BACK ONTO THE
PSP® (PlayStation®Portable) SYSTEM

SAN FRANCISCO – March 2, 2009 – Today Ubisoft announced Tenchu®: Shadow Assassins will launch on March 24 for PSP® (PlayStation®Portable) system in North America. The original creators of the best-selling Tenchu series, Acquire, returns to deliver the true look and gameplay to Tenchu: Shadow Assassins. Master the deadly skills of a ninja using the full functionality of the PSP system. Tenchu: Shadow Assassins is rated M for Mature by the ESRB.

Master the art of death on the PSP playing as Rikimaru and Ayame, elite ninjas who must use their lethal skills to keep the peace in feudal Japan. The accuracy of the PSP system’s control buttons lets players battle enemies quickly and attack them with katanas, throwing stars, smoke bombs and more. Expect to find the original Tenchu villain Onikage wreak havoc through dangerous territories. Additional PSP game features include: