As everybody with a brain knows, PETA is an insane organization full of insane people with an insane agenda. However, they do love their videogames, so that makes them alright by us. The animal rights group has taken a significant interest in gaming lately, following its self-publicized Sega ad petition and spat with Cooking Mama.

With this in mind, we figured it wouldn’t be long before PETA starts singling out more videogames as evil anti-animal propaganda. After all, a great many games feature hate crimes against poor, innocent creatures, and PETA must surely be taking note.

In order to help that totally harmless and well-balanced organization, Destructoid has decided to give PETA a head start and name ten games that will be keeping them awake at night. These are games that glorify animal cruelty, encourage disgusting carnivorous practices, or otherwise work against PETA’s ideals.

And remember, if you don’t agree with PETA, you deserve to have your throat slit. Read on for the list …

When it comes to animal cruelty, Viva Piñata has it all. Rare’s violent and sadistic “gardening” game encourages players to trap animals within enclosed spaces, where they are not groomed, rarely fed, and kept in a completely unnatural habitat. It’s a well-known fact that most elephants do not live in the snow with trees that grow precious stones, but Rare has allowed you to simulate such an environment, which would only confuse and psychologically damage any pachyderm in real life.

Not only that, but helpless animal victims in this game are routinely destroyed in order to satisfy the selfish whims of the human protagonists. Some creatures are cultivated purely to be slaughtered, as if they are there for man’s amusement. Well, they are NOT! Animals are people too, even fictional animals that are full of candy!

This kind of game will only make children want to hit real-life cats with shovels to see if they explode in a shower of sugary goodness, probably. Rare should be ashamed of itself.

Ubisoft’s animal slavery series of games starts off with a fundamental error. As everybody knows, PETA refuses to call animals “pets,” and no amount of swapping the “s” with a “z” will hide this developer’s sapien-centric animal dominion fetish.

All good PETA members know that the correct term is “companion.” Had Ubisoft called the game Companionz, then maybe this would have slipped under the radar, but luckily, Ubisoft gave away its sick intention at the first gate. Absolutely disrespectful to the dignity of dogs and cats all over the world.

MEAT is MURDER! This game should be called Murder Time because that’s what it is actually!

I don’t think people quite understand what goes into the creation of a so-called “tasty” burger, whether it’s time for burgers or not. It’s a well-known fact that before a cow is slaughtered for mincemeat, it actually cries. Some might argue that animals don’t cry, but they are wrong because of reasons. Farmers routinely have sex with cows and breed them to have weak back legs so they drag their rear portions behind them and can’t escape the meat grinders. This is a fact.

I don’t know how such a game even got licensed, since it basically promotes the widespread rape of all livestock in the world. Let it be known that there is never a time for burgers, regardless of what lies this piece of malware spouts.

You couldn’t have an article like this without Nintendo’s cockfighting simulator Pokémon, where animals are coldly stolen from their natural habitats, crammed into tiny balls like battery hens, and then forced to fight for the sick satisfaction of gamblers and drunks.

The game attempts to trick children into believing that the animals enjoy beating each other into a comatose near-death state, but let it be known that if Pikachu really existed, it would have gnawed its own limbs to the bone in a desperate frenzy, would be emaciated from lack of food, and would have lost at least one of its eyes. Its Pokéball would be full of vomit and feces where the “trainer” refuses to clean it out, and the fur would be far from yellow — it would be gray, and matted, and stained with dried, rusty blood. 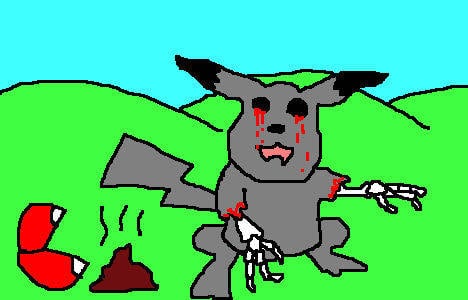 Are you kidding me? The title alone is a grim harbinger of serpentine genocide, but the game contained beyond the moniker is foul beyond words. The overall goal of this one is to murder and consume as many animals as possible, in varying degrees of rarity. Not only snakes, but goats, crabs, and even spiders can all be heartlessly stabbed, shot or trapped, and then picked apart at leisure while the voice of what can only be described as an alcoholic letch growls his perverse approval.

Any true animal lover would rather eat the Communists over the defenseless little creatures that are ritually gutted with merciless abandon. It’s not like Communists are even people, let alone animals. But no, Hideo Kojima and his gang of carnivorous death merchants revel in the serial killing of some of Russia’s most beautiful fauna.

If Snake Eater was depraved, then Valve’s Left 4 Dead is utterly beyond reproach. At least the animals in MGS3 were killed for a reason, however selfish a reason it was, but the senseless, ceaseless killing of innocent zombies in L4D does nothing but glorify slaughter for slaughter’s sake. Indescribable numbers of nature’s most enigmatic wild animal are lined up and shot down in the name of entertainment, with not even the vaguest hint of morality.

At the end of one of Left 4 Dead‘s so-called “campaigns”, you can expect to have brutally executed at least 1,000 of the poor, helpless creatures. As a rapidly dwindling species, zombies have enough problems as it is, without “games” like this encouraging us to thin their already decreasing numbers.

7. The Legend of Zelda series:

PETA routinely looks after the rights of chickens held in captivity, especially those destined to have their beaks pulled off and their wings broken for the evil machinations of KFC. Nintendo has done nothing to aid their plight, instead including chicken abuse as a “fun” diversion in several of its Legend of Zelda videogames.

Hacking a chicken to bits with a sword is pretty mercenary, but the game also teaches children that the poor creatures can be held above one’s head and used to glide across long distances. If a small infant tried to do that off the roof of his house, a poor little bird could suffer serious injuries. Oh, and some kid might get hurt, but fuck him, he’s human, right?

Rare with the cruelty again. A bird stuffed into a backpack would suffocate. Everybody knows that.

This one is just shameless. It’s bad enough when animals are forced to compete in sports in the name of their monstrous human dictators, but in a sport as violent as Joust, where ostriches are made to carry lance-wielding psychopaths into battle, a line has most definitely been crossed.

First of all, ostriches can’t fly, which would render this sport a failed experiment from the start. Secondly, anybody attempting to mount an ostrich, even without armor and weaponry, would find the sorry bird’s legs and spine breaking under the weight.

Ultimately, the reality of Joust is two “knights” wildly flailing at each other with metal poles while ostriches lie beneath them — shattered, bleeding and wildly squawking as they become instantly insane with an all-encompassing agony that wracks every inch of their quivering bodies. 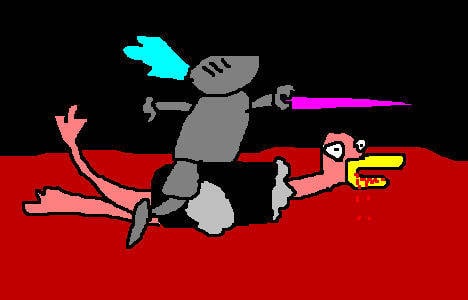 Apes are as close to humans as an animal can be, yet that does not stop man’s inhumanity from destroying any sense of respect and mercy. In Donkey Kong, a harmless gorilla is attempting to bond with a human female, when a psychotic Italian fights for the “honor” of inflicting a neck-breaking fall on him.

Nintendo would have us believe that the so-called Donkey Kong is intending to do harm to the girl, but we are given no real indication that this is the case. Gorillas in real life are harmless and would do nothing to hurt a human being. Kong may be planning to give the Pauline character a little present, but we never get to find out, since Mario (a convicted turtle abuser) sends him plummeting to his grisly demise every single time.

This game, and those that support violence towards primates (I’m looking at YOU, Steve Wiebe) can go to Hell. And may monkeys forever push you off scaffolding when you get there.