The remake has been serving videogame companies very well indeed for the past few years. Such successes as Prince of Persia and Ninja Gaiden have shown that an old IP can be given a fresh coat of paint and entertain a new generation of fans, as well as make nostalgic retroheads beam with delight at seeing their old heroes return.

Still, regardless of the few sore points, the glorious returns of long dead videogame characters won’t end any time soon. Masked maniac Rick Taylor is set to return with Splatterhouse, while the groovy guy himself, Earthworm Jim, has a full revival planned for the future.

With sarcophagi being kicked over left, right and center, the corpses within reanimated to serve their masters once again, who is left in the mausoleum of forgotten game characters, just itching for that one big break that sees their return to the spotlight? We’ve gathered a group of forgotten game heroes who need one last chance to turn things around and are overdue their comeback. Hit the jump to refresh your memory and bask in the unglorious glory of these faded stars. 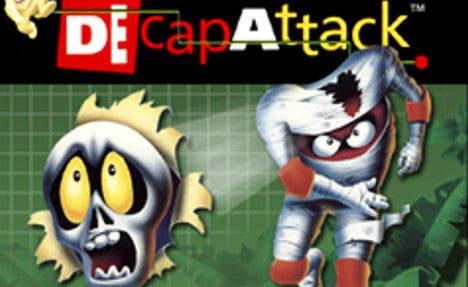 The Sega Genesis was home to many great videogame characters that had potential to make it big, but never quite found themselves able to step out of Sonic the Hedgehog’s shadow. One shining example was Chuck D. Head, the undead star of platformer Decap Attack.

With a great artistic style and some insane bosses, Decap Attack was a sweet little game that failed to become a major player, despite Chuck getting his own supplemental in Sonic the Comic. He was certainly a unique character at the time — while his peers were usually fluffy anthropomorphic animals, he was a headless, bandaged corpse that could project a grinning face from his chest and wear a flying skull on his neck.

If they announced a Decap Attack sequel tomorrow, I would shit out my own skull in celebration. Chuck D. Head stood out back in the day, and he could stand out again. 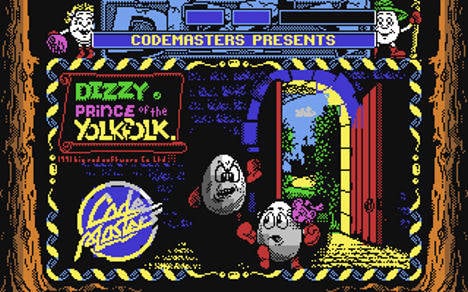 Ah, the Commodore 64. At one point in time, the cutting edge of computer gaming, later to become the mainstay of families who were too poor to own an NES. I came from one such family and as such, the Dizzy series would be an integral part of my childhood. My brother would play, and I would peer over his shoulder barking orders and solving puzzles. We were a team back then. Now we’re not. If only we had another living egg to bring us together.

Ex-colleague David Houghton and I have actually spoken with Codemasters about a Dizzy revival, but they won’t bring him back. In an era where the games industry really needs more eggs with eyes and mouths, Dizzy remains a forgotten icon of a long dead age, and it’s high time that Codies realized the goldmine they are sitting on. He might not have the ‘tude of Sonic or the charm of Mario, but he’s got heart, God damn it! That’s got to count for something. 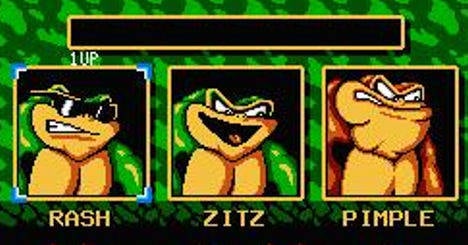 Castle Crashers proves it — scrolling beat ’em ups can still work in the modern age, and few could help the genre’s revival move along quicker than Rash, Zitz and Pimple, aka The Battletoads.

Okay, so Battletoads was a cynical rip-off of Teenage Mutant Ninja Turtles, but Donatello couldn’t sprout ram horns to headbutt his enemies, could he? No, didn’t think so. The NES original is both hailed and hated as one of the hardest games ever made, and unlike some of our other entries, remains a highly memorable classic.

With that in mind, it’s strange that Battletoads hasn’t seen a revival yet. Not only would it get instant recognition from the old school fanbase, the cartoon violence and art style would be enough to appeal to those who have never even heard of the franchise before. Marketed right, the game would be a surefire hit, but so far, we’ve seen hide nor hair of the amphibious pugilists. 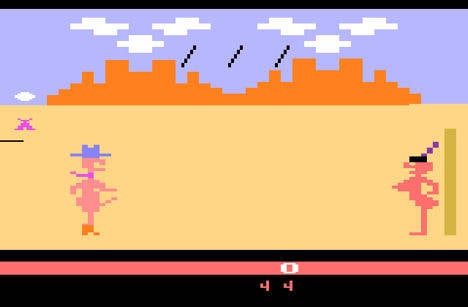 What? If you don’t think there’s room in this industry for a naked, Native American-raping cowboy with a penis the size of his arm, then you’re deluding yourself and if a Custer’s Revenge sequel was in the works, every single one of you would be excited. Just look at his little happy face and his adorable little boots — Custer could go head to head with Mario himself this Christmas and win!

Mystique, the company responsible for Custer’s Revenge, went out of business like many publishers from the Atari era, but the game saw new life as Westward Ho after the rights fell into the ownership of Playaround. If those rights could be acquired by, say, Rare, we could have ourselves the Custer’s Revenge as it always meant to exist — high definition, beautifully animated, intense misogyny. Custer’s Revenge: The REVENGE! 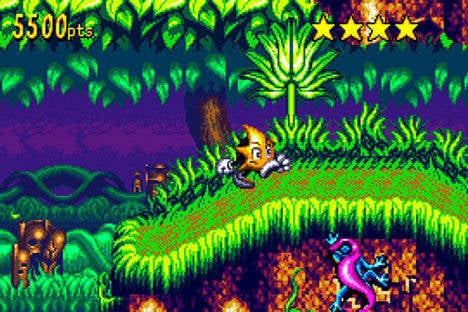 As I was saying earlier, the Genesis remains a crypt of forgotten gaming heroes who could have been something, and no character exemplifies this better than Ristar. Still fondly remembered today, Ristar was a gorgeous looking platform game that made use of its main character’s stretchy arms to provide a unique gameplay experience.

Sadly, Ristar struggled for attention mainly due to the arrival of 32 and 64 bit videogames, but it still sold enough copies to be classed as a success. The title also remains one of the highest rated Genesis games of all time. Considering he’s one of the few Sega characters not to have thoroughly pillaged for cameos and rehashes, perhaps it’s only a matter of time before we see Ristar’s merry yellow facade once more. 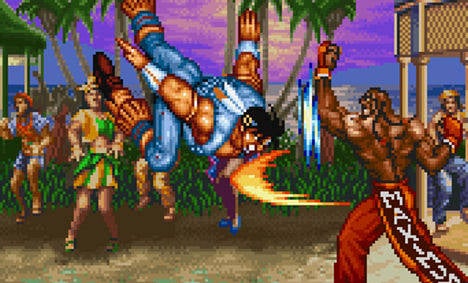 Poor, poor Dee Jay. Of Super Street Fighter II‘s “new challengers,” the rhythmic kickboxer was by far the least popular. He has only appeared in one other game, Street Fighter Alpha III, and has been forgotten about for the ten years since that appearance. 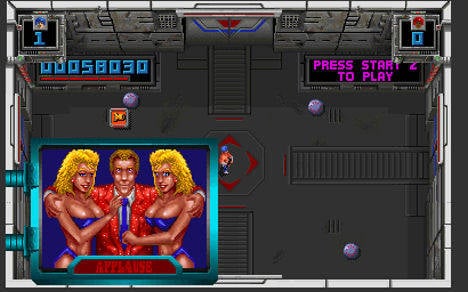 You have to hand it to Williams. When the company released Smash TV in 1990, it was at least up front about one thing — the game was designed, like all arcade games, to steal your money. It didn’t pretend to be anything other than an unfairly imbalanced game that would ensure swift and regular player death, thus swallow quarters by the seconds. The game is still well-known today, and has been re-released many times, ensuring that its greatest asset, the Smash TV host, is a recognizable face (and voice) in gaming.

Regularly interrupting the game to shout phrases like “Big money! Big prizes! I love it,” the host of in-game game show Smash TV was both your encourager and your ultimate nemesis, appearing at the end of the game as the final boss. If Smash TV is ever remade, you can guarantee that the cheesy, grinning, catchphrase-spouting host would be one of the biggest draws. 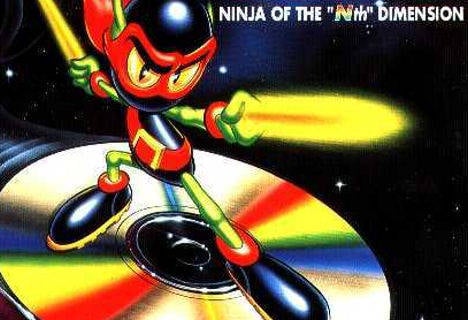 Zool deserves credit for having some balls, at the very least. This little fellow, the “Ninja of the Nth Dimension,” had the stones to go up against both Mario and Sonic as a mascot for the newly-launched, ultimately doomed Amiga 1200 in 1992. Seen as a beacon of hope for their waning console, those in the games press dedicated to the Amiga hyped Zool like crazy, but it never truly resonated with the public and, despite having a lot of coverage and high review scores, the ninja failed with only one sequel to his name.

Ironically, Zool would appear on both the SNES and Sega Genesis, the very consoles he had intended to fight, thanks to Commodore lacking the kind of IP control enjoyed by its rivals. The game was outclassed, however, by the sheer weight of existing software on the Nintendo and Sega platforms, and Zool’s was the life of obscurity. Perhaps if ninja were as big a pop culture fascination back then as they are now, he’d have survived.

He had potential as a character, and if he came back in an action game — think a cuter Ninja Gaiden — I reckon the plucky sod might have a modicum of staying power. 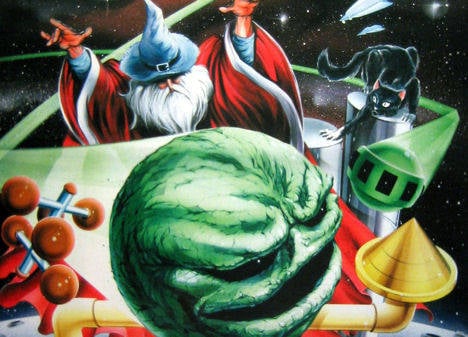 Wizball was easily among the more compelling Commodore 64 games, and represented one of the few times my family was united in anything that didn’t involve knocking ten shades of shit out of each other. This horizontally scrolling shooting game placed you in the role of a wizard who flew around as a big green ball, collecting drops of paint to color each level. It was a unique little title, and the fact that Wiz’s cat rode around in its own little ball called The Catellite is enough for me to want them to come back.

Interestingly enough, a remake of Wizball was released to commemorate its 20th anniversary. Featuring updated graphics and sound, the game was released for PC and Mac by Graham Goring. A full on XBLA/PSN/WiiWare/Steam remake would rock my world, however. 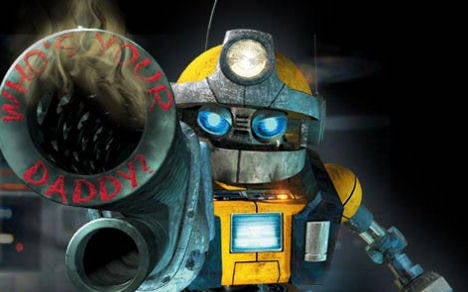 I’ve made no secret of my love for the robotic shooting game, Metal Arms: Glitch in the System. It was a fantastic title that hit it off with the press, but never ignited sales the way it was supposed to. Glitch, the robotic hero of this challenging and hilarious game, not only should come back, he was always supposed to.

It’s a very little known fact that Metal Arms was envisioned as a trilogy of games. After developer Swingin’ Ape Studios was sold to Vivendi, the title’s lead programmer Steve Ranck attempted to acquire the rights to his creation, but the new owners wouldn’t part with the Metal Arms IP. A criminal act, really, considering Vivendi has done nothing but sit on a wholly original idea that could have been expanded by now had they just given the rights to Ranck.

It’s unlikely we will ever see Glitch or his brilliantly realized co-stars again, and that’s a damn shame. A damn shame indeed.

And that’s that, the ten videogame characters who I think are overdue their big return. There are many other characters who could stand to come back, but these are the ones I would definitely love to see enjoy a revival, even if they do end up failing spectacularly with the fresh opportunity. Just give ’em one last chance, eh?