Defiance is SyFy and Trion Worlds’ venture that breaks new ground by simultaneously developing a television series and videogame within the same universe, and even sharing a few characters between the two. We were only given a sneak peek of the television series here at San Diego Comic-Con with a brief trailer, but we were able to spend a lot of time with the Trion Worlds-developed MMO, speaking with Nick Beliaff, vice president of development, and Ron Hill, senior producer, about the game.

We gathered a lot of information about the game’s intriguing story, San Francisco and Bay Area setting, dynamic in-game events, music, and gameplay. If you’re interested in this game or are looking for more details about the world of Defiance, check this out in conjunction with our hands-on preview from a couple months back.

Defiance has a truly fascinating story. Several alien species, upon discovering that their home systems were going to be destroyed, built ships known as arks and put representatives of their respective species on board along with some of their native flora and fauna. They ended up at Earth, not realizing we were already here, and proceeded to set up colonization rights in exchange for technology. This of course pissed a lot of people off who had to be relocated. Soon thereafter, the in-orbit arks were sabotaged and destroyed, causing their debris to rain down onto Earth with their terra-morphing machinery intact, causing radical changes to the surface of the planet and leading to generalized chaos and war.

The game and television show take place 40 years later on a drastically different Earth where governments and primary communications have been destroyed. 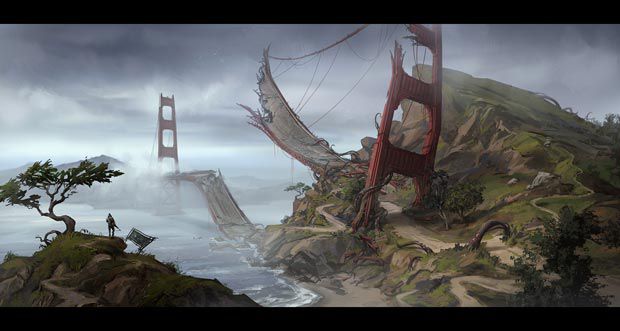 While the television show takes place in St. Louis, the game takes place in San Francisco and the surrounding Bay Area. Both cities are frontier cities where a valuable alien mineral called golenite has been discovered, and people are traveling to these areas to stake a claim.

The terra-morphing machinery found within the arks has turned portions of the city completely alien, while some are still intact and others are half-alien, half-human hybrids. You’ll explore wilderness and cityscapes, and will come across familiar sites including the Golden Gate Bridge which is now blown up, contorted, and un-crossable. According to Beliaeff, “We want that Planet of the Apes moment. San Francisco has so many landmarks that we wanted people to say, ‘Oh God, this really is Earth, and a lot has changed.’”

Bear McCreary, known mostly for his work in television on shows including Battlestar Galactica and The Walking Dead, is composing music for both the game and television show. That puts him in a pretty unique position to bring continuity across the two properties as most game projects based on television shows get different composers.

McCreary is working hard to create unique themes for the various alien races as well as reference material from Earth’s musical history, including the 1980s through the 2000s. We’re told that there will be a lot of dramatic orchestral score for the television show while the game may feature more action-oriented themes.

Also of note is the fact that McCreary’s unique position as the composer for both the show and game has turned him into somewhat of an expert resource for both teams. “If a member of this race was to pick up an instrument and start playing, what might it look like?” is a question that’s been brought to him several times, so he’s had to work with the team’s full-time mythology coordinator to develop unique instruments for the world’s various races that may even be mocked up and used in the television show. Maybe he ought to file a few patents for these instruments while he’s at it!

#4: A Complete Story Out of the Box 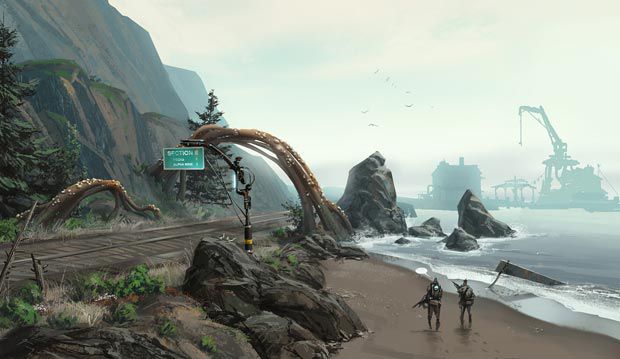 An entire storyline will be available out of the box, although there will be places for the team to plug in events that occur in the show into the game. There will also be regular content updates and possible expansion sets. Zone events (described below) use a modular plug-and-socket model to easily manage events throughout the game world.

The game plays and feels a lot like Halo. I was able to pick up an Xbox 360 controller and figure it out within 15 seconds, so I will also say that the controls are super intuitive. Using this controller configuration, the right trigger shoots, the left trigger zooms, the right shoulder throws grenades, and the left activities abilities. Pressing the right analog stick down performs a melee attack, and various other buttons are used to jump, crouch, and reload.

#6: Lots of Ways to Get Around 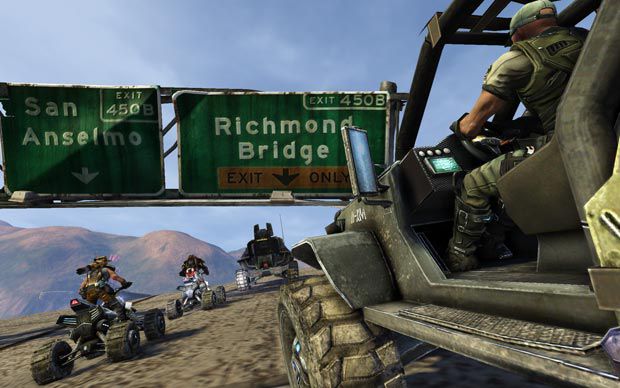 The game takes place in a large persistent world where players assume the role of a mercenary. The primary hubs where people will meet were described as “mainly outposts where characters can interact and trade.” When asked just how large the world would be given that it only encompasses sections of Northern California, we were told that they’re still working on that, but players will be able to use an ATV to cover more distance, and there will be a travel option to go between major locations (but “not too many, as we want you to interact with the world”). They’re also considering allowing players to spawn into the game next to their friends to immediately get into the action as opposed to having to coordinate a meeting spot.

While there isn’t a planned political system where players can group together and battle with one another for control of certain zones, there are factions that players can align themselves with for quests and notoriety. It seems as though the goal is for Defiance to be more collaborative than competitive. 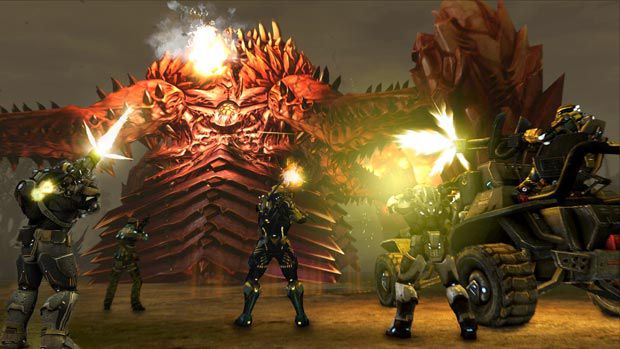 Pieces of the arks mentioned above are still in orbit with things living within them. These pieces randomly enter orbit and crash down onto the Earth, changing the environment due to the terra-morphing machinery. If players choose to partake in these events which involved killing a bunch of hellbug creatures in the demo we played, special minerals and technology can be obtained. While small ark falls will occur throughout the entire game world, larger, zone-wide ark falls will also be featured using their plug-and-socket model.

The game doesn’t feature a strict class system, but rather allows players to customize their character however they wish. One ability can be equipped at a time, but players can level up any ability he or she chooses, although it will be impossible to achieve the maximum level for all abilities, leaving players to prioritize what kind of character they’d like to play.

In groups, it’s beneficial to have each member choose a different ability. These abilities also have an impact on the weapons that can be equipped which include sniper rifles, shotguns, and a beam weapon with an area effect attack and a secondary healing function, effectively making these players a medic class. 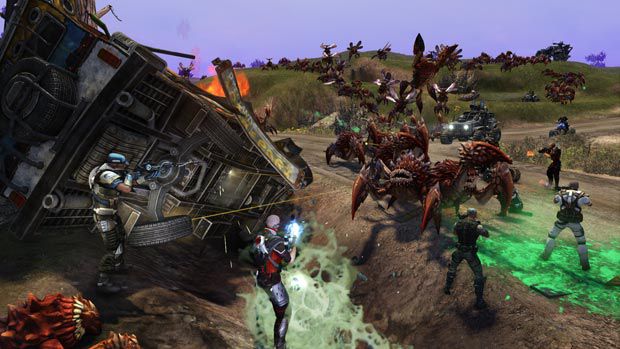 The hellbug creatures that have been featured heavily in promotional materials for the game are actually a mutation and not something that was brought to Earth by the alien races. They were actually small foreign bacteria that mutated and became these hideous creatures.

We encountered them frequently during the ark fall events because apparently the minerals contained within the arks are something that the hellbugs thrive on, so they aggressively defend the precious resource both by directly attacking players and by building defensive structures. One such structure has weak points located all around its body that players have to focus their fire on, emphasizing the first-person shooting in the game.

Other enemies include cyborg miners and another alien race that acts as a constant threat in both the game and television show that provides somewhat of a rallying point for all of the other races to join together against.

When I asked about drops, and what the hellbugs in particular may drop, we were told, “Hellbugs eat everything, so they do drop guns.” There will be rare drops from sub-bosses that appear randomly in the game world as well as in quests and four-player instances, and they will feature different visual appearances so players know they’re important.

We asked about PVP, and while we were told it will be in the game, Trion isn’t ready to talk about it until gamescom.

I had a lot of fun learning about and experiencing the world of Defiance, but are you sold on this hybrid television show/videogame and its first-person shooting gameplay within an MMO world?