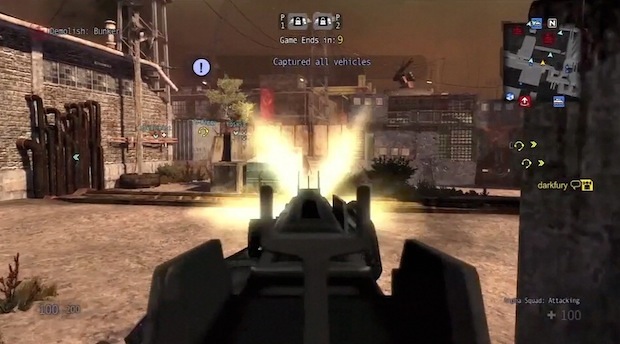 The other afternoon I asked myself (via the Internet of all places) why I wasn’t participating in the MAG beta. Like most of my peers with a soft spot for lead and things that fire said lead, I was blown away by the promise of the Zipper Interactive-developed title when revealed at E3 ’08. No way could a console shooter do the things uttered, support that many players, I thought. Just, no way at all.

Then came E3 ’09 and the live demo that I had an opportunity to watch while spending about fifteen minutes of appointment-free time. The piece of the demo I saw was convincing in that there were a ton of dudes playing at once and a massive amount of action was happening on-screen. Also, a good bit of fun was being had by the people participating in the little gated off area. The latter point, most of all, made me excited for the game — objective-based stuff tends to get a bit boring.

Fast-forward to now: I’m finally participating in the MAG beta in the middle of this landslide of late-year AAA titles. The last new game I’ve sunk a substantial amount of time in has a lot in common with MAG — Call of Duty: Modern Warfare 2. MAG and MW2 are both semi-realistic shooters with beefed up online components that encourage teamwork and strategy and ranking up.

Where they differ is readily evident: MAG is a smooth, but simplistic shooter that supports a ton of people at in a game at once. MW2 is a much lower player-capped game where the real fun, outside of the minor strategy, is in shooting others. MAG is more about the objectives than raw running and gunning. Matches in MAG end quick if people ignore what needs to be defended.

I haven’t progressed much in MAG thus far, nor have I been able to check out any of the elite features available in the beta. If you want substantial information, you’ll have to keep leaning on our preview of the shooter published moons ago as I think it’s a bit unfair to gauge the game — no less a beta — with my limited access.

One new thing I can offer you, however, is a look at the game as it exists now. Above in the header is a Ten Minute Test involving a 128-player objective-based match I participated in this afternoon. My squad leader didn’t have a microphone and apparently wasn’t too interested in helping out the other squads, so you won’t see an amazing amount of strategy in this. But you will witness the environment, vehicles, a bit of gunplay, and observe just how hard it is to take a defended bunker.

Keep in mind that this is a beta and this not the final game. All of the features are not unlocked and, obviously, bits and pieces of the game are subject to change.

That said, what do you guys think of MAG?