Since I’ve ramped up my coverage of iOS games on Destructoid, I’ve had a lot of iPhone/iPod users asking me for recommendations. There’s a ton of great ones out there, some of which rival console games in terms of how engrossing they can be. It’s difficult to list them all.

For those who get lost in the sea of iTunes, I though I’d make things easier with ten iOS games that I believe really should be on every iDevice out there. Of course, this is only a selection of the games I regularly play and love, so you can expect more of these lists in future. Please bear in mind when you start insulting me for not including your favorite game.

Anyway, fire up iTunes and take a look at the games you need to start downloading. 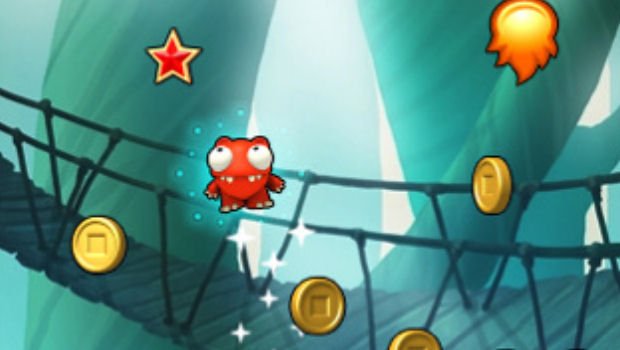 Mega Jump is, by far, my most played handheld game of the forever. Doodle Jump may be the more famous “jump” game, but Mega Jump‘s quality in terms of gameplay, visuals, sound and depth far outshines the indie mobile darling.

The aim of the game is to keep a little monster airborne by tilting the screen and allowing it to grab coins. Each coin propels him further, and if you miss your mark, the little creature will fall to his (presumed) death. There are all manner of cool power-ups, such as the magnet, which draws coins towards you, and the fireball, which propels you upward at a high speed.

Coins are converted to Mega Points at the end of each round, which can be used to buy new characters, and there are ten levels to unlock. Even with just one endless level, this would be a compelling time-sink of a game, but with the extra unlocks and features, this is one of the most robust experiences around, and it costs nothing. Mega Jump is a standard-bearer for mobile gaming. 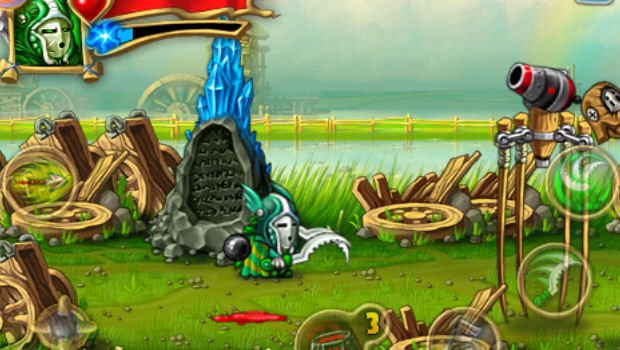 I can sell this game to you with a simple equation: Castle Crashers + Angry Birds guys = Unquestionable Win.

That is basically what this game is. A scrolling hack n’ slash game which lets you take one of three awesomely designed knights into the field to cross swords with other awesomely designed knights. The art style in Knight’s Rush is utterly fantastic, and the brawling gameplay is as tight as you can hope for. Throw in a range of customizable special skills and perks, and you’ve got a significantly rewarding title in your hands.

If you’re a fan of old school beat ’em ups or you just want to kill some stuff, you can’t go far wrong with Knight’s Rush. 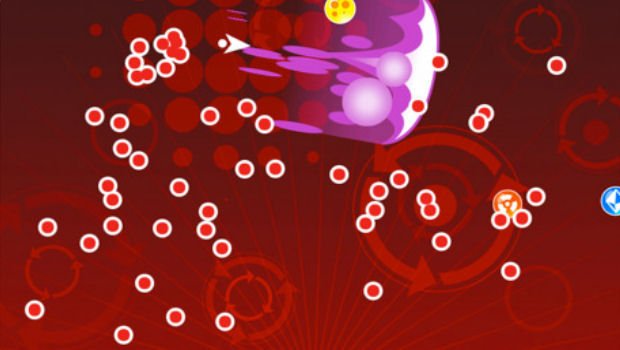 If you follow iOS gaming with any degree of depth, you’ll have heard of Tilt to Live by now. It’s with good reason, as Tilt to Live is one of the purest mobile gaming experiences you’ll get on your iThing.

The name pretty much says it all — you tilt in order to live. Red dots continuously spawn on the screen and your job is to move your iPhone around and avoid them. One touch and you’re out. Various weapons pop up to help clear dots, but this is a challenging little title that you won’t simply discard after five minutes.

There are several game modes to keep things interesting, but the main mode is more than enough. There are few games that feel completely at home on the iPhone, but Tilt to Live is one of them. I’m not sure if I’d like to see it on any other system. 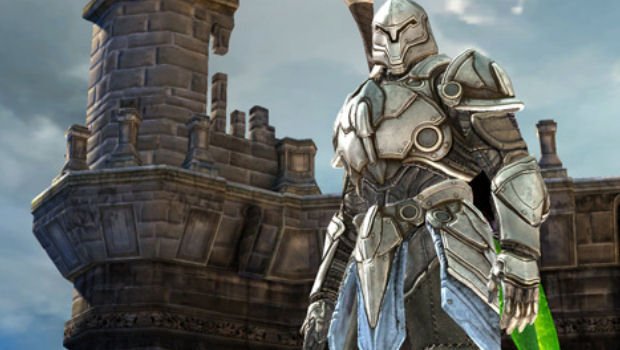 Infinity Blade was one of my top games of 2010, and I don’t just mean in the iPhone category — it was in my top ten across all platforms. This game is just that good, as Chair Entertainment took what could easily have been a mere tech demo and made something with surprising depth and compelling combat.

The aim of the game is to dodge, block and parry the attacks of various ugly monsters on your way to defeating the God King. Simple touching and swiping allows the player to deftly avoid enemy attacks and return fire with their own. In a way, it’s a series of QTE events, but Chair have done the impossible and made such a thing not only fun, but thoroughly engrossing.

Infinity Blade typifies the “one more go” mentality, where it’s impossible to simply play for five minutes and put it down. You’ll stick around despite your intentions of brevity, especially once you defeat the God King for the first time and earn a sense of euphoria that most games just don’t provide anymore. If you think beating that bastard once will be enough, you’re wrong — you’ll keep fighting tougher God Kings in a desperate effort to regain that victory high.

This is a game that needs to be on the frontpage of your iPhone screen at all times. 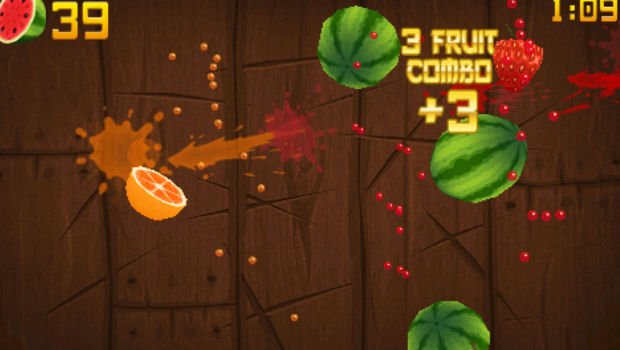 We at Destructoid have a lot of love for Halfbrick, so it’s a good thing that their games are pretty damn good. Fruit Ninja is one of those titles that sit right at home on a mobile phone, and can be enjoyed by absolutely anybody, wherever they happen to be.

Perfect for those five minute gaps where you have nothing to do, Fruit Ninja is a simple game in which you swipe the screen to cut bits of fruit in half. You have to avoid bombs and you lose a life if any fruit escapes the taste of steel. Easy concept, but it can get surprisingly tricky.

Since launch, Fruit Ninja has added online multiplayer and unlockable extras, as well as a few new modes. For a measly buck, you’ll get more than your fair share of fun out of this. 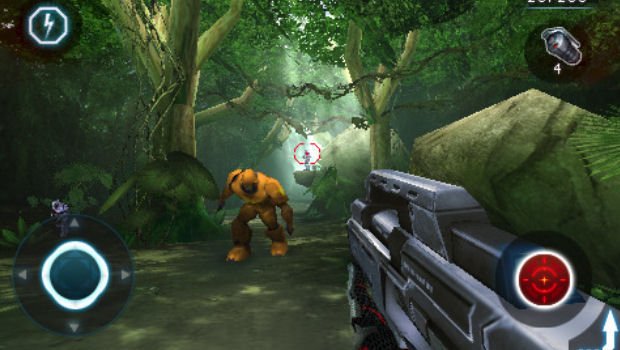 Although there is now a sequel to this game, I still have to recommend the first game just because the controls are a little tighter and better placed. For my money, no game has quite nailed a touchscreen first-person-shooter experience like N.O.V.A, not even its own followup. The controls are nearly perfect, the gameplay is solid, and it looks rather nice.

Okay, so it’s basically Halo on an iPhone, but where else are you going to get Halo on an iPhone? Microsoft sure as Hell isn’t going to do it, so it may as well be a third party with a close approximation. N.O.V.A 2 is by no means a bad game (I quite like it), but I recommend getting the original title first and only picking up the second if you really loved it. 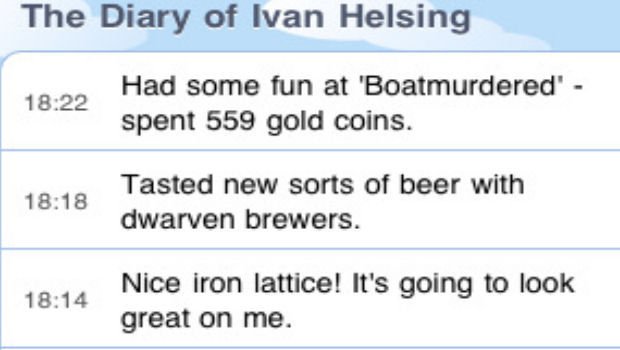 It’s billed as the world’s first “zero player game” and that’s more than just a pretentious attempt to be smug. See, the hero of the game is a person you have no direct control over. In fact, you don’t even see what he does. You read the diary entries detailing his exploits, as he completes quests, fights monsters, and earns equipment.

The catch is that he’s a rampantly zealous believer in you, his own personal God. In order to keep him fighting, you need to show him signs of your existence, because only an idiot would go out and do things in the name of a deity they’ve never interacted with. You have the option to reward or punish him, and your decision to do either will affect his personality. You can also send him personal text messages, though whether he understands what you say is another matter.

GodVille is an incredibly charming game that demands imagination on the part of the player but very little else. Its silly humor and community input makes this well worth the money. Oh wait, it’s absolutely free! 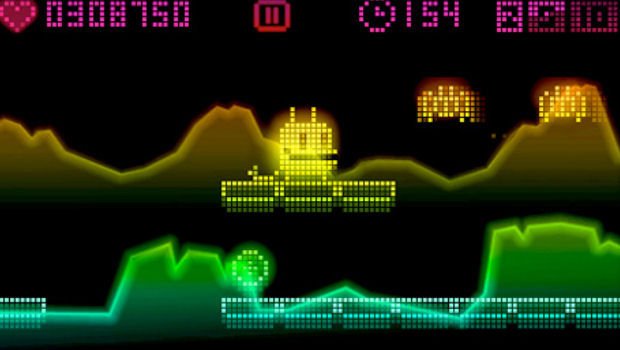 One of the most stylish games on the iPhone, Pix n’ Love Rush is a visual treat that evokes memories of such games as Geometry Wars and Space Invaders Extreme. Unlike those titles, Pix n’ Love is a platformer game in which you collect coins within increasingly challenging levels so that the cute player character can buy some cake.

It boasts tricky gameplay, wonderful aesthetics and is easily among the top platformers on the iOS. If you’ve got a respect for classic arcade games, this modern take on a venerable style of play will keep you thoroughly entertained. 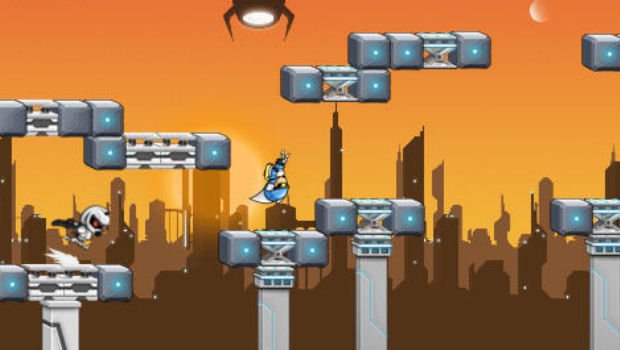 Due to the simplicity of the interface, there are many “Runner” games to be found on the iPhone, games where protagonists move of their own accord and players have to jump, dodge and attack to avoid obstacles. While a lot of them are good, few are quite so inventive, challenging and slick as Gravity Guy.

As the name implies, the central gimmick of this game is gravity. Tapping the screen reverses the gravity of the game world, basically causing the player to switch from the ground to the ceiling, and vice versa. This little twist on an established genre creates a completely different experience, one that can be pretty damn hard. Timing is crucial, and players will need both a keen eye and quick fingers to get through. Fortunately, Miniclip was kind enough to put checkpoints in!

Gravity Guy is one of the very best Runner games on the market. It has neat graphics, a strong sense of character and gameplay that is both simple and incredibly stressful — in a good way. 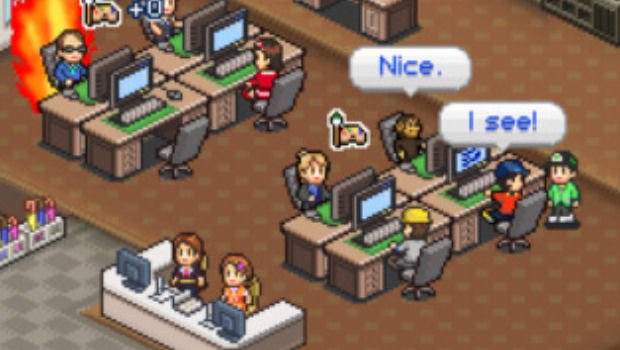 Really, what can be said about Game Dev Story that hasn’t been said in iTunes reviews, on Twitter, and across the pages of this very blog? It’s become a tired cliche to call a mobile game “addictive”, but if one game deserves such a description, it would be Kairosoft’s life-leeching little wonder.

Game Dev Story is a game about making games, a simulation that places you in charge of your own software studio. You choose the direction of the game and influence the areas in which to sink development time. You advertise, you support different consoles, and you attempt earn high review scores while raking in as much profit as possible.

Strangely, despite the things becoming quite easy once you’ve had a number one hit and start making mad bank, the game gets no less compelling. In fact, the sheer success of your games becomes addictive in its own right. Now I know why Bobby Kotick does it.

No mobile game should keep me awake until the early hours of the morning, but Game Dev Story has accomplished it. It’s the best four bucks you’ll spend.