“This is a man’s world,” James Brown once argued. “But it wouldn’t be nothing without a woman on this Earth.” Of course, he then proceeded to beat such women to within an inch of their lives, but the old abusive bastard had a point. Women are important, and while this male-dominated games industry overlooks them, the female of the species has its crucial place in the world of interactive entertainment.

Of course, as with most things that we have discussed in this series, any woman who wants to be in a videogame has to obey Ten Golden Rules in order to become a success. Ten concessions must be made if any videogame character hopes to be up there with the great female leaders of our medium.

If you too wish for the fame, fortune, and ultimately respect that comes with being a female in a videogame, then you’ll want to read and take note of the Ten Golden Rules of videogame women.

1. Armor is useless against enemies:

While any sane man would go into battle against a horde of demons wearing a full suit of armor and as much skin covered by protective clothing as possible, it’s a well-known fact that the flesh of a woman is hard as diamond, and as such, armor will only slow them down. This is the reason why most videogame heroines decide to go into battle wearing little more than a G-string and two eggcups. Anything else would get in the way.

Should you hope to become a famous videogame heroine, you must cast away bullet proof vests and hard helmets. It’s a well known scientific fact that if a woman fights a seven-foot-tall werewolf with ten-inch claws and her bare belly isn’t exposed and vulnerable, she will die because of reasons. This is proven using science, so you can’t argue with us. 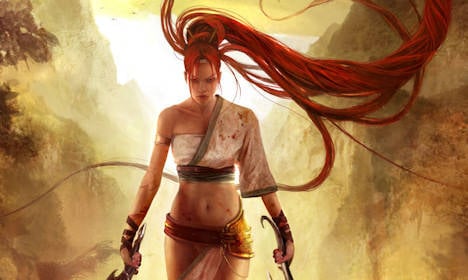 2. Look as non-age specific as possible:

As a videogame female, your job is to be as attractive to as many men as possible, and since pedophiles buy videogames too, looking like a ten-year-old boy with huge tits can’t hurt. Japanese female game characters are masters of this, their faces carrying an ambiguity that can be attractive to anybody, which allows salarymen to be naughty pederasts without their wives suspecting a thing.

The perfect women will have completely androgynous faces to ensnare both straight and gay men, with the huge dewy eyes and small mouths of creepy, doll-esque children for the pervoids. Finally, a wazzo pair of jugs sprouting from the ribcage like a two balloons full of custard just to make sure nobody feels guilty about cracking one off over the videogame box art. Everyone’s a winner.

Oh, and on the subject of breasts …

3. Tits must not obey the laws of physics:

In order to be accepted by the gamer community, you need to have a pair of norks that would make Charles Darwin’s head explode. Apparently, having a pair of breasts that hypnotically sway up and down, like those little plastic birds that pretend to drink water, is sexy. It’s not something we understand, but it’s the rules, and the only way that thirteen year-olds with no concept of reality (and Itagaki) can find you sexy.

There are operations on the surgical black market which replace the tissue inside your breasts with marmalade and helium. This is how Nina Williams got her job, so we recommend you look into it. 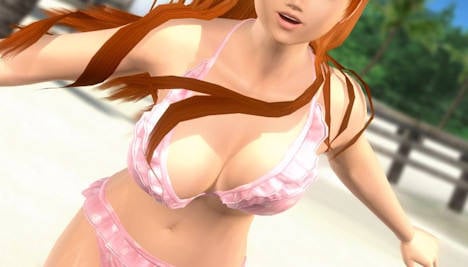 4. Remind everyone not to underestimate you because you’re a woman:

Women are strong-willed and indomitable — that’s the message videogame heroines pretend to relay to children. Basically, the best female videogame character will constantly tell people not to judge her on grounds of gender while constantly pointing out that she is, indeed, a woman.

It’s what we call the “Spice Girls method,” where a woman acts as if she’s all about female empowerment and ignores the irony that she was created by a room full of men to appeal to a room full of boys.

Male characters are strong and slow, female characters are agile but weak. Thus it was written, thus it shall never change. Apparently being “agile” in a videogame is some sort of equal trade-off for not being able to put so much as a dent in a baby’s cranium, but it is, unfortunately, the law.

This more than likely ties in with appealing to the kiddyfiddler demographic, but the best female characters have to be shrill and unbearable to listen to. The kind of voice that could set off an entire neighborhood of dogs into a whining frenzy.

If possible, try raping a cat with an overhead projecter. As you attempt to insert the projection machinery into the hapless feline’s arse, take note of the sound it makes. Now try and emulate that sound. You’ll fit in with the most iconic of videogame females in no time!

7. If you’re not the heroine, develop an obvious but spiteful love for the hero:

Just because you’re a member of the supporting cast doesn’t mean you don’t have rules to obey! The primary objective for all female supporting cast members in a videogame is that they must fall in love with the hero, but be a right nasty bitch to him at the same time. Don’t worry, it’s character development, and nobody will think you’re being a completely stupid twat who can’t get her life sorted out.

It’s important that you make the hero think you hate him, but get insanely jealous when he quite rightly takes an interest in a woman who isn’t a stuck-up cunt. Yes, just like in Hey Arnold!. By the end of the game, however, your true feelings will be known, and he suddenly won’t mind that you’re an egregious fuckspanner with schizophrenic tendencies. It’s how love works in real life, too. 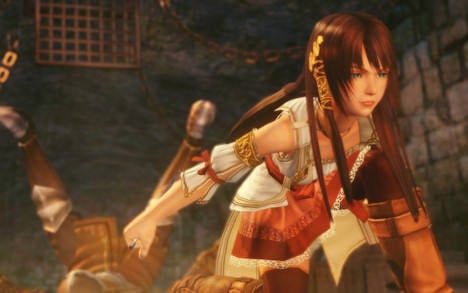 If you don’t want fifteen year-olds drawing pictures of you with a massive dick between your legs, then you don’t want to be a famous female videogame character. It’s simple as that.

9. You may only have one of three personality types, and none of them are very likable:

Everybody knows that women don’t really have personalities, which is why you must stick to one of the tried and tested archetypes. You can be one of the following characters if you insist on daring to speak in front of men:

If you’re very good, you’ll try and roll all three stereotypes into one dissociative character, with no regard to consistency or continuity. If you do deviate from one of these archetypes, don’t expect to be very successful, but take solace from the fact that people who love talking about videogames will constantly bring you up as an exception to other female videogame characters and talk about how “truly beautiful” your development was like the pretentious ghouls they are.