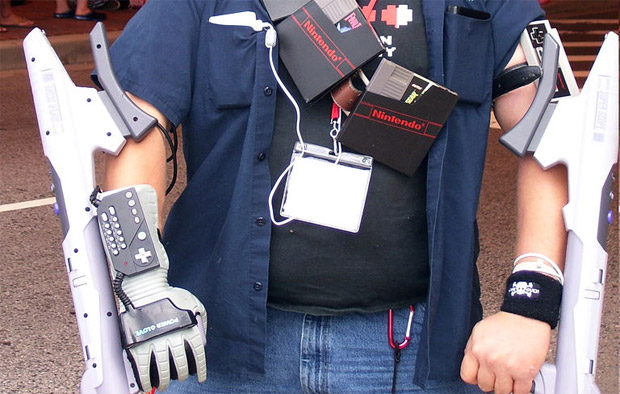 What industry can truly call itself an industry without fanboys? Those who prove themselves obsessively loyal to any product or corporation can be found among many communities, and nowhere do they flourish more freely than within gamer culture.

Although it may sound ridiculous to normal people, swearing undying allegiance to a heartless box of electrical components is a perfectly rational act in the mind of the fanboy, even though if he defended something like a particular brand of cheese with such rabid determination, he’d be rightly locked up in a mental hospital. Thanks to the Internet, where any anonymous coward can say what he likes, fanboyism runs rampant, and shows no signs of slowing down.

That said, the term fanboy is thrown around all too casually, and is now on par with the word emo when it comes to having lost all meaning through erroneous overuse. If you want to be a true fanboy — and I know all of you do — then you must, of course, follow ten golden rules. The ten elegant laws that will see you rise above the pretenders and take your place in fanboy Valhalla.

1: Any criticism of your chosen love is a result of bias:

Once you’ve chosen the object of your fanboyism, be it a console, game or corporation, you are bound by honor to defend it to the last and refuse to entertain the opinions of any would-be detractors. The easiest way to deal with any critique of your passion is to brush it off as bias on the part of the critic. If you feel like a hypocrite for accusing someone of personal bias to champion your own personal preferences, just ignore it. Soon that feeling will pass, right around the time the foam starts forming around your lips.

Besides, you are totally in the right. After all, your chosen Holy Grail is so absolutely perfect that the person bashing it HAS to have some sort of sinister agenda. Nobody would ever, in a million years, want to criticize your favorite console unless they were pursuing a shady vendetta, right? Accusing any detractors of unfair bias will undermine their position completely, and prove that the cause you are championing is utterly free of negative points.

2: The only defense is attack:

Most of the fanboy’s chief tactics revolve around refusing to engage in intellectual debate. This ensures you can never be proven wrong, as no logical person is able to argue with those to whom logic makes no sense. With that in mind, never, EVER defend your stance with a well-reasoned response. Just attack, attack, attack, and you will ultimately triumph in a war of attrition.

Anything is fair game, from insulting the writer of any criticism, to mocking other consoles or games companies, even if they have nothing to do with the debate — in fact, bringing in such straw men is encouraged, since it makes your argument even less coherent, thus less possible to counter. If somebody asks you a question or calls you out on one of your comments, just ignore them. Don’t attempt to answer any queries, because that may betray the fact that you have no idea what you’re talking about.

3: You are an unpaid salesman:

With great fanboyism comes great responsibility. Not only are you fighting for your cause, you are also looking for new recruits. While psychotically attacking everything in the vicinity, try to also convince other people that what you’re championing is a good purchase. Tell people to play your favorite game, or convince them that your chosen console is worth its high price tag. Remember, the more people who own that which you love, the more validated as a person you become. Even though the makers of your love object aren’t paying you, nor would even piss on you if you were on fire, try and make them some cash. It’s the least you could do.

4: Ignore any positive comments, focus only on the negative:

This goes hand in hand with our first rule, especially if you embark on a campaign against someone you believe has “bias” against your lord and master. Make sure to never engage any positive comments that critics have to say about that which you adore, because otherwise it becomes so much harder to accuse them of shitting on it 100% of the time. If you simply pretend they have never said good things about your favorite company, then you have carte blanche to make such hyperbolic claims as “every single post you write is an anti-Sony post” or “you put the words “fuck Tekken” in between every paragraph.”

Inevitably, because fanboys are liars, your target will eventually provide examples that contradict your hyperbole. Remember our second rule, though — ignore what they say and just keep making your unfounded statements. All’s fair in love and flame war.

5: Call everyone else a “fanboy” before they call you one:

Part of the reason why the word fanboy is so overused is because fanboys themselves use it constantly. This is actually an ingenious ploy put into place to ensure that true fanboys can just slip harmlessly into the crowd, like a stealthy ninja. Their own rampant obsession with a particular videogame or machine then becomes craftily hidden, and it won’t become blatantly obvious that they have a hard-on for Jack Tretton.

If you accuse your opponents of being fanboys first, then you have instantly won the argument and you will be heralded as the King of Arguing About Things On The Internet. You rob them of their ability to call you one, while making sure nobody suspects you, and if you’re really good, those who would dare become your enemies might actually believe they have turned into fanboys and promptly kill themselves. You’re just that awesome at arguing about things on the Internet.

6: Criticisms are old news, who cares?:

A great way to deal with criticism is to state that all negative points are “old news” and that nobody cares anymore. If you’re really witty, you might like to also post a .jpg of an old hat, which will make everyone realize that the news is old hat. When a particular negative point has been going around for a while, that means it becomes less true. For instance, Xbox 360s no longer red ring anymore, because that was controversial in 2007 and nothing lasts longer than a year.

Anybody pointing out valid reasons why your beloved is not entirely perfect can be instantly invalidated by screaming “OLD” at them. They will then surrender unconditionally and march under your fanboy banner, a loyal and lowly subordinate to your iron will.

Remember, as a fanboy, you cannot afford to become engaged in a protracted argument, because your carefully constructed lack of sense may be torn apart under a spotlight. Specialize in hit and run tactics. Attack with force, but make sure not to stick around too long in the aftermath. Spread your attacks over multiple threads rather than a single ongoing debate, as it spreads your opposition thin and means you can safely ignore their counterpoints while continuing to spout obscenities at them. Remember, nothing exists outside of the current thread you’re in, so if you get proven wrong in one debate, you can make the exact same point in another. Just make sure to ignore any reply you get and continue your single-minded assault.

You are the Hydra. For every head that gets cut down, you can grow two in its place. Especially if it’s the head with a dick growing out the top of it.

8: Justify even the stupidest decisions/games:

Even though your paragon of perfection is completely flawless, sometimes a corporation might make a bad decision, or your favorite videogame may have some flaws — stick up for them, and act like they are, in fact, the best things ever. Sony wants to make arrogant PR statements when it’s trailing in sales? Claim they have a right to be arrogant, because Blu-ray is the future. Nintendo wants to focus on casual gamers now? That’s awesome. You never much liked being a hardcore gamer anyway. It’s simple.

This is doubly important if you’re a console fanboy and an exclusive videogame has come out. Even if the game is pure shit, you must champion it to the last man, because it is exclusive, thus anybody who insults the game is insulting your chosen system, thus insulting YOU by proxy. So, if someone says they think Mass Effect is rubbish, you need to deride them as a Sony fanboy who just hates Microsoft because of BIAS. A friend of yours not keen on Heavenly Sword? Call them something really witty like an “XBot” and tell them to “Go back to GAYLO!”

Nobody talks about YOUR man, girlfriend!

9: Resort to melodrama to make your point:

Faint heart ne’er won fair maid, and a sensible person never got the attention he desperately craved. If you want to really make a stand, and also impress everyone who might be looking, you need to explode in a mass of drama and hysteria to make your point. If someone points out a flaw in the Wii, for example, launch into conspiracy theory and paranoia, and tell them you wish they were dead. Saying a bad thing about a videogame console definitely deserves a tragic and painful death in some sort of twisted accident, so you are right to wish it.

Make sure to just triplicate the intensity and rage that your opponent uses, and it will become clear to any spectators that you are in charge. The caps lock is your friend in this situation, as people will associate it with shouting, and find you as commanding a presence as they would if Brian Blessed himself were explaining why the Xbox 360 is better than the PS3, or vice versa.

You will invariably come out on top if you refuse to quantify and blow things completely out of proportion. After all, moderation is for those XBot fags, right?

10: Be a complete and total motherfucking IDIOT!:

Above all else, my friend.