By our very nature, we as people are drawn to the dark. We may not like to admit it, but our macabre instincts thirst for blood, as we find ourselves morbidly drawn to brutality and violence. It is no surprise that horror is such a popular genre, where we can explore our grim compulsion to view carnage and experience fear in the comfort of our own homes.

Fear is a powerful motivator, and an instinct that we like to keep well sharpened. Horror taps into a need to be scared, a need to keep one’s “fight or flight” programming well-honed and finely tuned. Horror games are no different. Unlike movies, a survival horror places the player directly in the thick of the terror, directly in the eye of the storm, where fight our natural instincts are not only brought out, but actively required.

Be it Resident Evil, Silent Hill, Alone in the Dark or Clock Tower, there are many frightening examples of interactive horror to choose from, where the primary goal is simply to get out of there alive. In general, they follow a set of distinct rules. While not 100% true in all cases, there are ten important golden rules that a survival horror ought to acknowledge if it wants to be truly terrifying.

1: Main protagonist must have zero fighting ability, even if a highly trained professional:

Jill Valentine is an elite member of the task force S.T.A.R.S, a strategic rescue unit highly trained to deal with all manner of dangerous activity. However, she cannot throw a punch to save her life. She can’t jump, can barely run and isn’t even very good with a gun. How she could even qualify as a bus conductor, let alone make Alpha Team for S.T.A.R.S, is an amazing feat, but it’s a staple of survival horror — absolutely useless heroes.

This doesn’t mean that they don’t instantly know how to hold and reload a hunting rifle if they find it lying around.

Survival horror is a unique genre, where bad game mechanics can be justified by claiming they make things scarier. It’s just not a good horror game if the playable character doesn’t move like an inebriated crab on a beach ball. It’s not enough for somebody to enter a room, turn around and then leave. If you want to get back out the door you came in through, you need to run around the entirety of the room first, as ridiculously wide lift-truck swings are the only only way to turn — it makes things scarier!

3: Despite a lack of ammunition, shotguns are just left lying around:

There’s barely three bullets in the entire city, but there is always a shotgun just conveniently laying around for you to pick up. In survival horror, other people don’t take their guns with them, probably because they used up the one box of shells they could find. You’d think people would keep their shotguns just in case, but not these people — and that’s why they are dead. Their loss is your gain, however, as you will always find a trusty shotgun less than an hour after you’ve found a pistol. Hooray!

4: People leave notes where anybody can read them, especially highly classified ones:

You’re alone and isolated in a zombie infested city/demon ridden town, with limited escape options and little chance of rescue. What do you do? Grab a pen and start practicing your calligraphy! People trapped in the world of survival horror love to get their write on, and leave little notes of mostly useless information in ludicrous places. Perhaps the breakdown of society and its fascist litter laws have caused the populace to get drunk on power, littering with wanton abandon. Nobody will stop these paper trailing maniacs now!

The best notes are the highly classified documents that have just been left out for anybody to read. Granted, there’s not much you can do with secret corporate knowledge when a crazed mutant is pulling your arms off, but that’s not the point. An outbreak of flesh tearing monsters is NO excuse for a lack of professional conduct and correct filing.

Can we truly be sure that Raccoon City’s inhabitants were the victims of the T-Virus? My personal theory is that, rather than becoming infected by a biologically engineered disease, they were simply driven mad by years of having to use keys in the shape of helmets and pushing blocks around rooms just to open fucking doors.

It seems that most buildings in survival horror games were designed by schizophrenic lunatics who felt that it should take two hours to get from the kitchen to the bathroom, with a collected eighteen miles of backtracking in between. Why does a hotel need a working music box to open a door? How did the local council give that planning permission!? It doesn’t matter, because it’s part of why survival horror is awesome.

6: Nobody knows how to kick a door down:

Following on from the last entry, it seems that to be a survival horror character, you must have legs made of cheese and biscuits, because you can’t kick open a door to literally save your life. You’d think nobody would mind if you just skip convention and bust into a room rather than perform some insane puzzle to find the key, but it seems that nobody is letting an onslaught of monstrous entities get in the way of being polite and respectful of other people’s property.

This does work both ways, however. If you’re being pursued by something that wants your flesh, simply close a door on it and there’s a 90% chance it will be too polite to break it down. It won’t even knock. It seems that if you want to survive any kind of mutant/ghost/zombie outbreak in your city, if you drag a door around with you, you will be invincible. Monsters can’t handle that opening and closing shit, meng!

7: Last bosses must be utterly ridiculous: 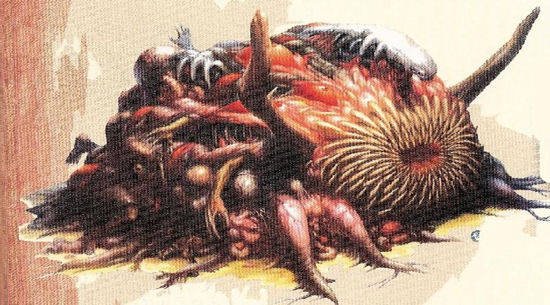 8: You can’t just have a simple fucking healthbar:

Health bars are quick and easy ways of seeing if you’re in trouble, which is why we don’t want them anywhere near our survival horrors. The very point of survival horror is to be as awkward, abstract and pretentious as possible, so health bars should be vague representations hidden on another screen. Do you see how this makes everything scarier!?

Scary gameplay must be accompanied by scarily bad acting and/or a horrific script. The last thing you want to do is sympathize with anybody, lest it becomes difficult to maintain the inevitable erection you’ll be sporting when they are promptly and brutally slain. This is a standard horror convention that gaming has adapted with great skill.

At this point I would like to offer a special round of applause for Forbidden Siren. Whoever decided to give distinctly Japanese characters a localized voice cast of substandard actors from England is an absolute genius. It made everything scarier!

10: Nobody ever just LEAVES!

You’d think the best way to survive a monster-laden incident would be to not get involved, but that’s not enough for some people. There are times when a character might have the perfect avenue to escape — and they don’t. More likely, they’ll take the route that gets them into even worse trouble. Hell, James Sunderland didn’t even have to go to Silent Hill at all, let alone keep on walking deeper into town after realizing everyone was being eaten by monsters. I’d have turned my ass right round after the first demon I had to smash down, let alone the fiftieth.

And that’s why survival horror rules.