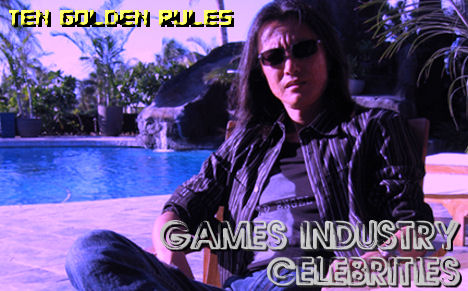 Back in the good old days, games developers were bespectacled, hairy monstrosities that kept themselves safely locked away in perpetually dark bedrooms, their only relationship in life being a loyal devotion to endless streams of code for the latest Commodore 64 hits. While Jeff Minter does his best to keep those days alive, it cannot be denied that the birth of the Internet gave rise to a new breed of game developer: One with a captive audience, an opportunity to say whatever he or she felt like, and the 24 hour online access that made them feel as famous as The Brad Pitts.

Yes, the era of the games industry celebrity had begun, and since the creators of Triple A titles now know what human contact is like, they have taken to the heady world of public relations like ducks to water — with a grace, charisma and dignity that only they can exude.

The Internet is a glorious invention, is it not? Endless oceans of information threaten to drown its many swimmers, and this can be used to your advantage. With thousands upon thousands of blogs ready and waiting to report on one’s every action, you will have plenty of opportunity to hype both your game and yourself. The best part is that no matter what you say, it will never come back to haunt you.

Make as many crazy promises as you want. Claim that your videogame is actually magic, and you consulted with sorcerers throughout development. Claim that the AI is so intelligent, characters can write and record their own original songs with Paul Simon on guitar. ALWAYS mention the AI. The hype machine is nothing but beneficial to any videogame, so make sure to use it with wanton abandon.

Don’t worry about this hype biting you in the ass when people finally get to play your game. On the Internet, nobody remembers anything that was said and nothing gets recorded.

Everybody wants to know how awesome you think you are, and a developer diary is a brilliant way to get your beautiful face into the public arena. Here you can talk about how your game is “dark” and “gritty” and it will really impress the public, who have never played a dark and gritty game before.

This works hand in hand with the hype building, with the added bonus that when you finally post the diary on Gametrailers, you can maximize the video size, sit back and pretend that you are watching yourself on television.

3. Take full credit and responsibility for the game during development:

If you’re going to be a top notch industry celeb, then you need to make sure that everybody knows you made whatever game it is you’re making. You also want to be seen as the sole creator and designer of the game, so don’t share public credit with anybody.

Preferably, other members of the development team should be kept away from real people for as long possible. We’re aware that in a certain studio in Canada, for instance, one particular designer keeps his team in a Silence of the Lambs style pit while games are made. Those that die inside the pit are succeeded by their children, born to serve their parents’ life sentences. A bit like Bane out of Batman.

4. Take NO credit and responsibility for the game after launch:

You took all the credit before everyone knew your game sucked, but now that the truth is out, it’s, time to get off the flaming train and throw everyone you know underneath it as you do so. Blame your coders, blame your playtesters — blame ancient Egyptian curses if you have to, just make sure that everybody knows this wasn’t your fault.

If the game suffers from framerate issues, blame the hardware. After all, the PlayStation 3 is difficult to develop for, and all your 360 dev kits suffered red rings … or something. Similarly, bad reviews are easy to deal with — simply blame the people who wrote them. The only reason your game (which you had nothing to do with) has a 4.5 Metacritic average is because everybody who played it is stupid.

5. Wear a special item of clothing:

The best gaming celebrities have special clothes that they wear so that it’s less easy to forget who they are. For instance, everybody knows that Clifford Bleszinski wears a cowboy hat and carries a leather whip everywhere she goes, while Shigeru Miyamoto is never seen in public without his trademark leather jacket and sunshades. Such highly memorable personalities like these are imbued with a visual recognition factor thanks to their dandy threads.

It worked for Roy Orbison, after all. That man had absolutely zero distinguishing features until he started wearing sunglasses all the time. If you want to be the Roy Orbison of videogames, you better invest in your own unique garments. Maybe a T-Shirt that says “Nerds Are Sexy,” or a skintight wetsuit with military boots. You will be so cool.

6. Trash games that you didn’t make:

Class is overrated, and since everybody loves to see a developer talking smack, it should be a top priority to insult videogames that you didn’t make. You won’t come across as a bridge-burning asshole who has so little confidence in his own work that he needs to piss on everyone else’s.

Everyone will respect you for being such a hard ass, and at every games event, you will be awarded a smart little trophy. Your vicious criticism will cause irreparable damage to the sales of rival games while boosting your own numbers. Your cobblers will also expand to fantastic proportions, while the cobblers of your enemies will shrivel and shrink, that they resemble a pair of raisins with a baby tapeworm dangling off them. This is will definitely happen.

7. Get into flame wars with online communities:

Internet tough guys are the toughest guys on the Internet, so it’s always good PR to indulge in drawn out flame wars with online communities. Challenging gangs of strangers to typing contests is the ultimate display of bravery, and your ability to construct a poorly worded run-on sentence will instill potential customers with nothing but confidence. Furthermore, the gamers you’re currently arguing with will be more than keen to hand you their $40.

If it becomes clear that you’re clearly losing the fight, quickly bail out and pretend that you were merely making some insanely clever social point. It’ll be bullshit, but everybody will be too in awe of your insight to realize. You’ll be held up on high as a unique social commentator while those that mocked you online will be reviled as gullible fools who fell for your brilliant plan. Just never explain exactly what it is you were trying to prove, otherwise everyone will remember you’re a pretentious dick.

8. If in doubt, talk insane bollocks:

9. Get into a feud with another games industry celebrity:

Controversy = cash, and nothing is more controversial than a good old fashioned mudslinging war. Gamers love to watch two nerds going at it, especially if they’re over thirty years of age and should know better. Try and be as deeply personal as possible, if you really want to set the blogs on fire with your melodramatic horseshit.

Always make sure to point out how worthless reviews are, despite that the fact that your career hinges on their arbitrary scores. It’s important to urge gamers not to pay attention to reviews, and that they should play the games for themselves — if you don’t do this, you might not be able to trick them into giving you their money. Flaunting a disregard for reviews means that you won’t ever have to defend your product from a deluge of criticism. Just keep repeating “play the game for yourself” and millions of gamers will ignore all negative press and rush out to purchase the game.

However, if you somehow stumble upon a positive review, quickly hold it up with pride and use it as incontrovertible proof that your creation is fantastic. Nobody will remember that you previously said a review is “just one random guy’s opinion” and will instead find you highly credible for creating what is now a critically acclaimed masterpiece.

Reviews don’t matter, until you find one that says nice things about you.

And these, dear friends, are the Ten Golden Rules of games industry celebrities. If you want to make a name for yourself in the videogames business, follow these laws to the letter, and you too could be the next Will Wright.

Not that anybody knows who that guy is.