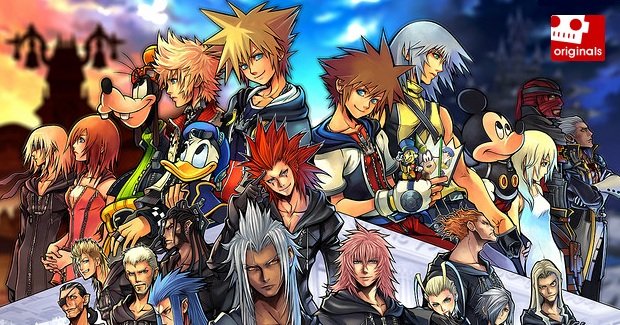 Kingdom Hearts III is not officially a thing yet. According to series director Tetsuya Nomura it is coming someday … but any word of its actual existence is shrouded in secrecy behind the mysterious Chocobo-guarded doors of Square Enix.

And while a lot of people are starting to lose interest in the once fresh, once revolutionary series, I can’t help but be excited by how awesome a new, proper Kingdom Hearts sequel could potentially be. (Forget all those crazy, insanely-named spinoffs!)

One of the best parts about the Kingdom Hearts series is discovering what Disney movies and characters will be featured as levels and companions in the games. As a massive Disney fan, there is nothing better than jumping from one surprising Disney level to the next with a familiar and beloved Disney character by your side.

But I want more! So far the Kingdom Hearts series has included a fair number of awesome Disney levels, but so many amazing Disney properties still remain untouched. For a Disney super fan like me, the possibilities for Kingdom Hearts III are endless …

We all know that Dumbo has already been featured as a summon in Kingdom Hearts. But imagine how cool an entire level revolving around the almost-too-touching-for-words animated feature could be?

The level: The circus.
The circus is a suitably creepy and visually interesting set piece, and Heartless versions of the deranged characters that populate the environment (clowns, lion tamers, human cannonballs!) would make great enemies for Sora and the gang.

Featured characters: Dumbo. Mrs. Jumbo. Timothy Q. Mouse [summon!]. The Ringmaster [final boss!].
The characters set up the level goals perfectly: Dumbo needs to save his locked-up mother from the evil Ringmaster; only Sora, Donald, and Goofy (with the assistance of Timothy Q. Mouse and that “magic” feather) can help him do this! Throw in something about the darkness, and you have the perfect Kingdom Hearts level!

Admittedly, the sole reason I want to be able to play a Bambi level in Kingdom Hearts III is so I can stab the Hunter in the face with Sora’s Keyblade. Seriously. I hate that guy.

The level: The forest.
Forest levels are a necessity in RPGs. Why not have one set in the adorable and dangerous world of Bambi?

Featured characters: Bambi. Thumper. Flower [summon!]. The hunter [final boss!].
Having Thumper showing you the way through a maze-like forest? Flower using his stink attack summoning power to stun enemies? And, again, stabbing the hunter in the face with a Keyblade? Sounds pretty much perfect.

Okay, get ready for some serious Pixar love. The fact that not one Pixar movie has been featured in a Kingdom Hearts game is an absolute injustice. And, of all the Pixar masterpieces, The Incredibles might be the best one to get a Kingdom Hearts makeover.

One of the most fun parts about the Kingdom Heart series is seeing the transformations of main characters Sora, Donald, and Goofy into themed versions of whatever world they are visiting (see: the animal forms in the Lion King level in Kingdom Hearts II).

Seeing the three main characters in red Spandex suits sporting individual super powers would be worth the price of admission alone.

The level: Syndrome’s island.
Syndrome’s island lair offers a vast array of beautiful locations and the potential for a wide variety of different gameplay. Remember sliding along the tree branches in the Tarzan level in the first Kingdom Hearts? Imagine  a similar sequence that finds Sora, Donald, and Goofy running with Dash atop the crystal clear waters around the island.

Featured characters: Mr. Incredible. Elastigirl. Violet. Dash. Jack-Jack. Edna Mode. Frozone [summon!]. Syndrome [final boss!].
An epic, robot-filled battle with Syndrome is a given. As is interacting with all the different members of the Incredible family. But I want a shop run by Edna Mode that offers a variety of armor upgrades!

I know, I know, most people don’t like Cars very much. (For the record, I kind of love it.)

But with what I just said above regarding character transformations, can you blame me for wanting to see Sora, Donald, and Goofy as car versions of themselves? I’m sorry, it would be beyond amazing.

The level: The Radiator Springs Grand Prix
Just as The Little Mermaid was turned into a rhythm minigame in Kingdom Hearts II, I would love to see a Cars-inspired minigame level with nothing but racing. Could be fun!

Featured characters: Lightning McQueen. Doc Hudson. Sally. Luigi. Mack [summon!]. Chick Hicks and/or Francesco Bernoulli [final boss(es)!].
Sorry, Mater. You can watch this one from the pitstop. As much I love Cars, even I think you are a little annoying …

The most obvious of all the choices, Toy Story has to make an appearance in Kingdom Hearts III. It is arguably Disney/Pixar’s most recognizable movie and would make a perfect level in the game. It’s also freakin’ Toy Story!*

The level: Andy’s playroom.
In a throwback to the Alice in Wonderland level in the first Kingdom Hearts, Sora, Donald, and Goofy could shrink down and travel through a giant, oversized version of Andy’s playroom. Is this an obvious choice? Totally. But it would still be a great level to play.

Featured characters: Woody. Buzz Lightyear. Jessie. Bullseye [summon!]. Mr. Potato Head. Slinky Dog. Hamm. Rex. The toy aliens. Emperor Zurg [final boss!].
Of course I would love to play a level next to Woody and Buzz Lightyear, but think about the amount of great supporting characters that could be featured in a Toy Story level! Sora could ride on Bullseye (my favorite Pixar character!)! He could go on missions with the little green aliens! He could battle Emperor Zurg! I WANT TO DO ALL THIS RIGHT NOW!

*The more I think about it, the more I realize that every Pixar movie would make a great Kingdom Hearts level.  Monsters Inc.? Finding Nemo? WALL-E?! Instead of narrowing it down to a few, let’s just put all of them into Kingdom Hearts III. Thanks, Square Enix!

I have no idea why there is so much Black Cauldron hate. Yeah, the movie is no Little Mermaid, but it is an engrossing, surprisingly dark adventure that I kind of loved when I was a kid. (BLU-RAY RELEASE, PLEASE!) There was also a classic adventure game based on the movie released in the late ‘80s that was also pretty great. And if the movie can make a great adventure game, a Kingdom Hearts appearance is obviously the next logical step!

The level: The Horned King’s castle.
Nothing screams “Kingdom Hearts” like a dark castle filled with horrible undead monstrosities, led by one of the scariest and most terrifying Disney villains ever created. Seriously, the Horned King gave me nightmares as a kid. And by “as a kid” I mean “yesterday.”

Yup, this would be a terrible level to feature in Kingdom Hearts III. But people make a big fuss about trying to create a game that makes people cry. Creating anything that is based on Fox and the Hound would make me cry. Heck, I once saw a Fox and the Hound lunchbox and even that made me cry.

The level: The cottage.
Mist-covered fields. A peaceful forest. Winding brooks. Could be a beautiful level.

Featured characters: Tod. Copper. Big Mama [summon!]. Vixey. The bear [final boss!].
Hey, remember that time when Tod told Copper that he was his very best friend? And then Copper said that Tod was his best friend, too? And then they get older and … and they … BAWWWWWWWWWWWWWWWW!

Another Disney movie that I think is completely underrated. Whether you like the movie or not, The Hunchback of Notre Dame would make a great Kingdom Hearts level. So great, it may actually be a reality! (There are rumors a Hunchback level will be featured in upcoming spinoff Kingdom Hearts 3D: Dream Drop Distance.)

The level: Notre Dame.
The massive  church featured in the movie has all the makings of a great videogame level. First off, it’s huge, filled with many twisting hallways and secret passageways. In addition, it’s tall, allowing the level to be more vertical than horizontal. Imagine the platforming sections as Sora traverses up to the bell tower! That wouldn’t result in frustration at all!

Featured characters: Quasimodo. Esmeralda. Phoebus. Clopin. Victor, Hugo, and Laverne [summons!]. Frollo [final boss!].
Frollo is one badass villain. Evil, psychotic, and genuinely scary. He would give Maleficent a run for her money as one of the main Kingdom Hearts villains. Hellfire, indeed.

The level: The rooftops of London.
Fine, I admit it: I just want to sing “Chim Chim Cher-ee” and dance around with some chimney sweeps. WHY IS THAT SO WRONG?!

Featured characters: Mary Poppins [summon!]. Bert. The Banks children. Admiral Boom.
Mary Poppins is such a positive, loving movie, that I really can’t imagine there being a final boss … or really any enemies, for that matter! But just give me a level where I can summon Mary Poppins to hang out with while riding on one of those amazing carousel horses and I will be one happy guy.

With other live-action movies already making it into the Kingdom Hearts games (Pirates of the Caribbean, Tron, etc.), I am genuinely shocked Who Framed Roger Rabbit? has yet to make the cut. Also, Roger Rabbit’s Car Toon Spin at Disneyland is a ridiculous ride, and I want to see that kind of zany energy brought to Kingdom Hearts.

The level: Hollywood/Toontown.
This has the potential to be a classic “light world/dark world” scenario. In Hollywood, all the set pieces could look “realistic”, like the Pirates level in Kingdom Hearts II, with Donald and Goofy being the cartoon characters in the real world. In Toontown, the roles could be reversed.

What do you think? Do you agree that these would make great levels in Kingdom Hearts III? What Disney levels and characters would you love to see in the still-not-announced game?