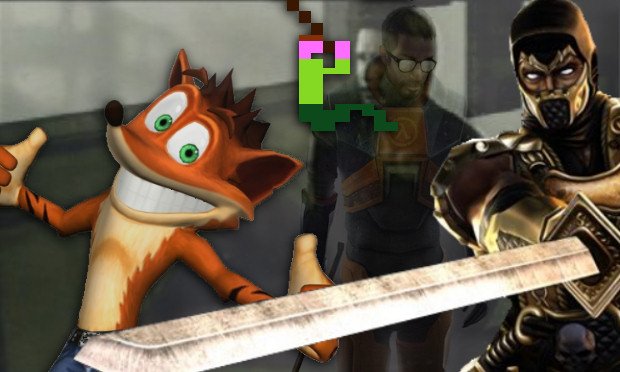 Videogames are a constantly and rapidly evolving medium. While this means that amazing advances in gameplay and graphics consistently surprise us, it also means that those very same advances are destined to look rustic, quaint or simply atrocious in the short space of a few years. Just take the PlayStation era. The move from sprite-based gaming to 3D was hailed as a masterpiece, yet most of the PSOne “classics” of the day are regarded as rather sub-par now. Many of today’s great-looking games run the risk of a similar fate.

To stand the test of time is a rare and special feat in the games industry. Some games have remained ageless due to impressive gameplay that nobody before or since has attempted, a simple graphical style that relies more on artistic beauty than graphical horsepower, or simply being damn good at what they do in ways that modern games can’t even match.

That said, there are a fair few games looked back on fondly today that have not aged as well as everybody believes they have. They may have been groundbreaking, brilliant titles in their era, but going back to them now reveals a shockingly poor experience that one’s rose-tinted specs have attempted to deny. These are the games we shall name and shame in this feature, so come with me as we look at a number of “classic” games that did not age well.

When he first spun his way onto the PlayStation in 1996, Crash Bandicoot hoped to do for Sony what Mario had done for Nintendo or Sonic had done for Sega. He had all the makings of a classic platformer mascot, and while he never failed as hard as Bubsy or Bug, he did not become the hugely successful face of PlayStation that had been expected. Nevertheless, his game was considered a classic of its time, and going back to it these days really lets you understand why Crash is not a very popular guy.

The controls were bad enough. Crash Bandicoot has no concept of DualShock thumbsticks, and navigating the 3D platforming sections on a D-Pad is horrendous. Crash is difficult to control, and it’s not helped by a rather crap camera that usually portrays the action from a very awkward angle. These two elements conspired to create frequent deaths as the player attempted to get a bulky, hard-to-move, ugly jumble of polygons to jump onto small surface areas surrounded by huge chasms. It was also nearly impossible to jump on crates or time the spin move properly to attack enemies.

It’s no surprise that Crash Bandicoot‘s more successful stages are the old-school 2D platforming ones.

Most of the truly retro games have managed to age surprisingly well due to one thing — simplicity. The less bells and whistles you put on a game, the less chance you have for something to look bad later, and this is why games like Pac-Man and Tetris have weathered the trials of time quite successfully. Pitfall is a similarly simple game, but unfortunately, it has not managed to survive the dating process at all.

Pitfall is a horrible, horrible game. It looks like shit, and plays like shit with blood in it. Pitfall Harry’s adventure through the Mayan Jungle is a horribly bleak and messy platformer in which logs, crocodile heads and and scorpions must all be dodged with a terrible jump mechanic that usually sees the poor bastard land directly on top of the thing he’s trying to avoid.

Also, let’s not forget the horrible sound effects. Pitfall sounds like what I imagine two pixels having sex would sound like if pixels were capable of forming sexual relationships and generated noise independently. Pitfall? More like Shitfall.

Mortal Kombat is a game that succeeded due to one thing and one thing only — violence. Acts of brutality inflicted on “realistic” human characters typified by sadistic Fatality finishing moves in which people were beheaded, impaled and incinerated ensured that this would be a game to remember. It famously inspired the creation of the ESRB, a system that now rates every commercially available videogame in North America. Yeah, it’s actually pretty rubbish.

The digitized characters were described in promotional material as “so real it hurts!” It certainly hurts, but not because it’s realistic. It just looks incredibly silly nowadays, not helped by the poor animation and poorer costumes. The gameplay itself isn’t much better, outclassed even back in the day by Street Fighter II. All Mortal Kombat had going for it was the violence, and that’s pretty tame in comparison to what we have these days, with Gears of War offering full-on chainsaw action and Grand Theft Auto allowing us to snipe the heads off of cops. Outmatched both as a fighting game and a showcase of violence, Mortal Kombat has nothing to offer the modern world.

Oh, and the Fatalities are all crap, too.

Although by no means a bad game, Wild Arms is certainly dated. It was released in North America the same year that Final Fantasy VII was, and the difference between the two is clear. Wild Arms looks worse, using so-so sprite-based graphics for towns and maps, and inexplicably switching to an inferior 3D battle screen for combat. Say what you will about VII‘s dated graphics — at least when it switched to battles, it looked better, not worse.

Wild Arms is decent enough, and is still worth playing, but it did not stand the test of time and, even back in the day, did not do all that it could have done in the face of Square Enix’s approaching behemoth. While we’re here, I might as well tell you that Final Fantasy VII is not on this list. It’s still very playable, even today. You might want to skip right to the comments section now to complain about that.

Altered Beast is a curious one, because it’s hard to say that it aged badly. In truth, it was never a good game, even back in the eighties, yet somehow it has managed to trick everyone and be regarded as a classic while inspiring a wave of undeserved nostalgia among retroheads. Quite how this crime against humanity got to be remembered so fondly is beyond me, but hopefully we can look back on it nowadays and objectively agree that it is total crap.

Everything about this game is bad. The slow, plodding, side-scrolling combat is dull at best and frustrating at worst. The bosses are a shambling mess of button mashing and spammed attacks, the digitized voice “acting” is a joke and the graphics look like someone smeared bacon over a child’s drawing of ancient Greece. The big selling point, being able to turn into a mythical beast, is stupid. Playing as a werewolf or a dragon is even more boring than playing as a semi-naked corpse, since you just hit the attack button and watch the ludicrous assortment of enemies run into your kill zone.

Radio … what’s going on with that radio?

Silent Hill 2 is one of my favorite games of all time, yet the original Silent Hill is a title I can barely stomach playing anymore. Sure, it introduced us to the deeply disturbing world of psychological horror, providing a more cerebral counterpart to Capcom’s B-movie-styled Resident Evil, but unlike Silent Hill 2, which aged well thanks to amazing storytelling and an atmosphere that made up for its archaic survival horror trappings, the debut of the franchise just isn’t up to snuff.

It looks awful, it’s acted badly, and the story is nowhere near as well crafted as its sequel’s, with questionable dialog and a plot that really wasn’t all that intriguing. Its stumbling survival horror gameplay was not improved over Resident Evil in the slightest, and that game was three years older. At least with Resident Evil, it has an aforementioned B-movie style that gave it charm and made the inherent crapness of the game much more tolerable. Resident Evil survived through being laughably bad, but Silent Hill took itself far more seriously and, in attempting to be a more dark and realistic game, it failed to withstand the raising standards of the modern age.

Wanking over Lara Croft. Everyone’s tried it once. Never quite works.

Before Metal Gear Solid, there was Metal Gear, and it was bloody horrible. The stealth genre has its fair share of problems, but this debut of Konami’s “tactical stealth action” gave birth to most of them. Trial-and-error gameplay has never been more intense, with deaths ready to swoop in at the player completely without warning. The idea is to sneak around, but enemies will often gladly spot you and you won’t even know why, while the game’s many traps have been put into the game for no other reason than to ambush the player. Trapdoors are triggered without any indication that they were there and without any chance to escape. The whole thing’s a mess.

Add into that the fact that it’s badly translated (“I feel asleep”) and full of puzzles and areas that gamers would need some form of ESP to navigate, and you have yourself one bad game. Fortunately, Metal Gear Solid came along and undid all the harm, but this was a terrible start, no matter how big a classic people think it is.

I love Valve, and I love the Half-Life series. I also have a great respect for the original Half-Life and what it did for the FPS genre, especially the way it told a story completely from the perspective of the player. However, like many PC FPS titles from the nineties, Half-Life has not aged well and now, over a decade after its release, it’s simply not a very good game. Back in the day, it was a revelation. In this day and age, you’re better off watching it on YouTube.

Aside from the poor graphics, outdated engine and annoying, imbalanced combat, Half-Life‘s gravest sin is the idea of first-person platforming. The amount of jumping about and guessing where your feet will land is intolerable, and by the time you get to Xen, if you have any hair left, the last remaining strands will more assuredly be torn out.

You’ll never catch me diminishing Half-Life‘s achievements as an experience. As a game, however, it leaves a lot to be desired. Thankfully those desires were fulfilled in Half-Life 2, an infinitely superior game that, fortunately, has indeed aged well.

It’s hailed as one of the best FPS games ever made, an unrivaled multiplayer experience and a hallmark of N64 excellence. Let’s face it, though, it’s not really that good, and if it ever did make it onto Xbox Live Arcade like everybody hopes, it would quickly disappoint.

GoldenEye has been eclipsed by so many other games that it’s not even funny. Halo, Killzone 2, and Call of Duty provide superior multiplayer experiences nowadays and I don’t know why, outside of the James Bond flavor, anybody would have to go back to Rare’s effort, which was fine at the time, but really can’t hope to hold up against today’s standards. I last played GoldenEye a few years back and was shocked at just how bad it really is. It’s a classic case of people using their old happy memories to convince themselves a game is still good. You may think you want to see this game re-released, but trust me, you really don’t. At best it’s a novelty, at worst it’s a horrifically dated FPS that should not be played anymore.