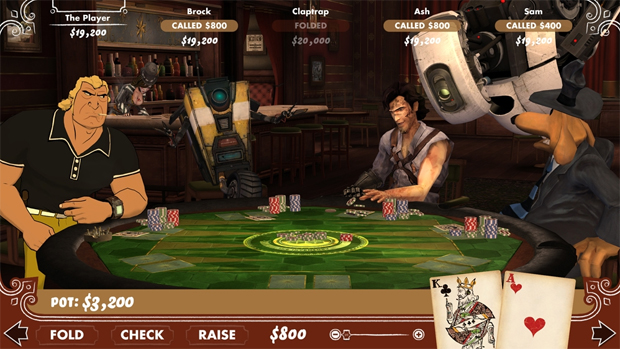 Telltale Games has a teaser site running right now referring to a “key party,” and showing an image of a dish which has seen the addition of various sets of keys over the last few days, with the promise that all will be revealed on April 1st. The cat may have escaped this particular bag, as the internet sleuths at NeoGAF have discovered screenshots and box art in the Xbox Live Marketplace asset repository, revealing the game to be Telltale Games’ Poker Night 2, a followup to the 2010 release, Poker Night at the Inventory.

As you can no doubt see, the batch of characters players should be able to compete against include Claptrap (Borderlands), Sam (Sam & Max; Max was in the original Poker Night), Ashley Williams (Evil Dead), and Brock Samson (The Venture Bros.). GlaDOS (Portal) is also present, but is not listed as a competitor, which may mean that she simply participates in conversations between characters and doesn’t play herself.

Now, I firmly believe that this is a thing which is happening, but it’s also set to reveal on April 1st, and I don’t put anything past anyone when it comes to that day. I don’t even understand why anybody would even schedule a reveal for that day, so full is the internet with frivolity and deception. We’ve reached out to Telltale for comment and will let you know if they get back to us.