One of the biggest attractions in Tekken Tag Tournament 2 is the new 2 vs 1 mode. The mode goes alongside the 2 vs 2 and 1 vs 1 options, and despite the presumption that the fights won’t be fair, Tekken Producer Katsuhiro Harada told us that the battle parameters will be altered during these type of matches. Meaning the team of two won’t be as strong as they would be in a standard tag battle, the solo fighter won’t take as much damage, and so forth. Plus the solo fighter can win the round if he’s able to quickly take out at least one of the two tag team combatants.

After showing some of the fighting mechanics in 2 vs 1, Harada showed off another new mode in Tekken Tag Tournament 2 called Fight Lab. It’s basically a tutorial mode with a light story designed to appeal to novices and advanced players alike. 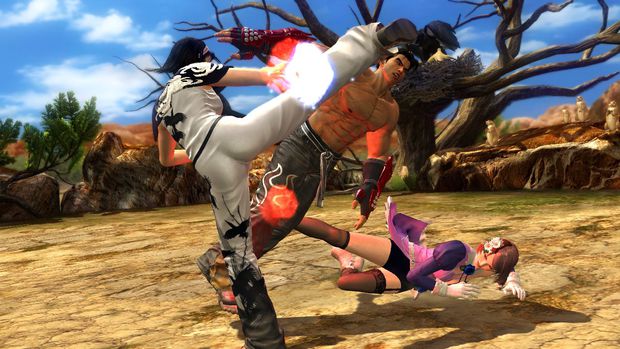 Harada wants to make the training mode interesting, and move beyond something as simple as following the onscreen instructions. Instead of telling players to press a button to do an evade, for example, Harada imagines that there will be characters throwing sushi or maybe even bears and pandas rolling at you to teach you the moves in a mini-game-like atmosphere. It essentially accomplishes the same teachings while keeping things interesting.

While that’s still in the works, Harada showed us one aspect of Fight Lab which stars Violet, also known as Lee Chaolan. Violet has finally created his ultimate Combot robot, but due to his ineptitude, accidentally destroys his greatest creation. So he activates his older model, which is where you come in. 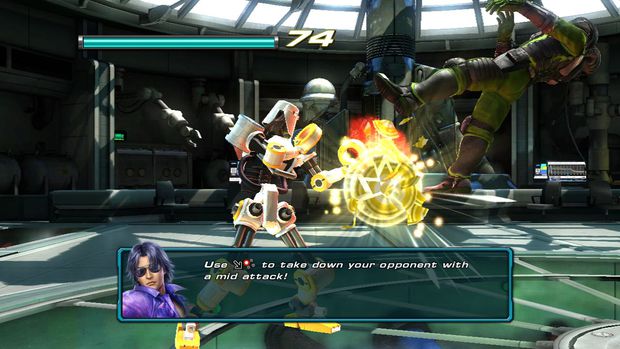 Players will control Combot in Fight Lab and you’re trained how to block, punch, kick and everything else Tekken has to offer. The opponents you’re set against have targets on their body that you have to hit correctly, and a misstep will see you getting damaged. Harada believes that this will help increase player’s skills the more they train with Combot.

Additionally, Combot can be programmed with techniques from other Tekken fighters, thus allowing you to create your own ultimate fighter. You can customize Combot’s look with parts you unlock during the mode too. Your custom created Combot can then be taken outside this mode and fight against other players, but it wasn’t clear in what modes this can be done in. Purely speculation, but I do wonder if tournament players would be okay with such a wild card being allowed in Tekken Tag Tournament 2’s online mode.

This is just a small taste of what’s to come in Tekken Tag Tournament 2. It’s not just going to be a port of the arcade version as the team did a lot to bring the game over to consoles. In fact, Tag 2 is now “twice the graphical power of Tekken 6.” What we were shown was just a small taste into what Harada considers the “ultimate Tekken package”, with more to be revealed at E3 this year.