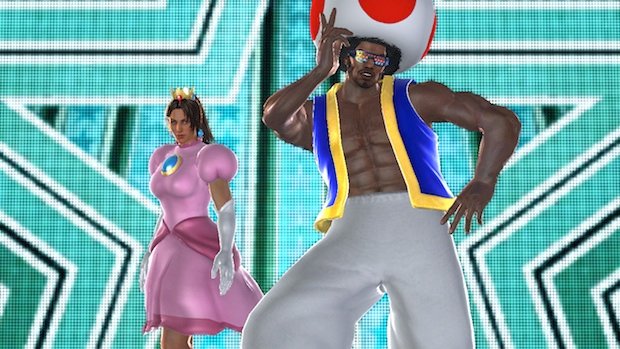 I love all the extra crazy sh*t they’re throwing into Tekken Tag Tournament 2 Wii U Edition, which will be available at launch for the Wii U on November 18. All the new costumes and modes are a nice (and weird) bonus on top of an already solid fighting game.

Tekken characters dressed up in Nintendo costumes comes timed perfectly for Halloween, as that’s exactly what the situation looks like. It’s like a geeky costume party. Tekken brawlers are wearing Toad hats, or Captain Falcon helmets. Princess Peach is a common costume, but you can also dress up as Sheik for some major nerd cred. Think about how mindblowing this would be to the early 1990’s version of yourself!

You’ll also see images from the Tekken Ball minigame in our gallery. Those that played Tekken 3 might remember this cross between dodge ball and volleyball. It’s strange to see characters that would normally be kicking each others’ faces off playing with a huge beach ball.