[For his Monthly Musing, AwesomeExMachina explores bias not in terms of developers or platforms, but simply in terms of aesthetics. Want to post your own Monthly Musing? Click on this and start writing! — JRo]

As I sit with pen and paper and try and make an annotated list of my various video game biases, I find myself crossing out each entry just after I’ve written it. It makes complete sense for a moment, for instance, to say that I’m a bit biased towards the Xbox 360 over other consoles. I play it significantly more than my Playstation 3, which often sits tearfully idle with one little red light blipping like a lonely matte-black-painted Cylon. I once owned a Wii, but not anymore. It fell casualty to the brutal Gamestop trade-in when rent was looking a little short. But this was only after I’d stopped playing the poor thing for months on end. No, my 360 is my main event each evening after work. So much so that if it red-ring-of-death’d tonight, I’d simply bow my head gracefully and whisper ‘You earned it, little buddy’.

I have no problem stating my preferences. The internet made that the easiest thing of all time. But what I find hard doing – even contradictory – is to consciously claim to have bias over a console or a genre. Because the title of fanboy is not one must people assign to themselves. Rather, it’s a title bestowed upon them for time spent being belligerent on forums or making blunt judgments on a particular game series without a moments thought. No one consciously forms a one-sided opinion or becomes obnoxious and obstinate on purpose. To co-opt a friend’s theory on hipster self-awareness, no one is a fanboy by admission.

This is why these things don’t interest me – console obsessions and series worship – because they are just opinions. So when searching for where you truly have bias, it’s never quite as easy as things you love and things you hate. It’s more complex than that. It’s not your opinions themselves, but those little viewpoints that carved your predilections into shape. It’s those sinister machinations under the decisions you make that drive your choices in bad way. In a negative, unintentionally ignorant way. We all have them and I think I’ve come to terms with mine.

I still judge games on how pretty they look.

It’s not something I deliberately do. I have such constant and vocal respect for things like story and characters and voice acting and balancing unique gameplay with player freedom. If a game makes me react emotionally, catapulted upright with excitement or toss my controller away from me in fear, I tell all my friends at length the same way one might rant endlessly about a great chapter of a book or the best scene from a film. I love games enough to spend my waking hours writing about them and trying to explain to family and friends why they’re worthwhile. Yet, despite this near-religious reverence, I still look at a game’s flashy visuals and make snap decisions. 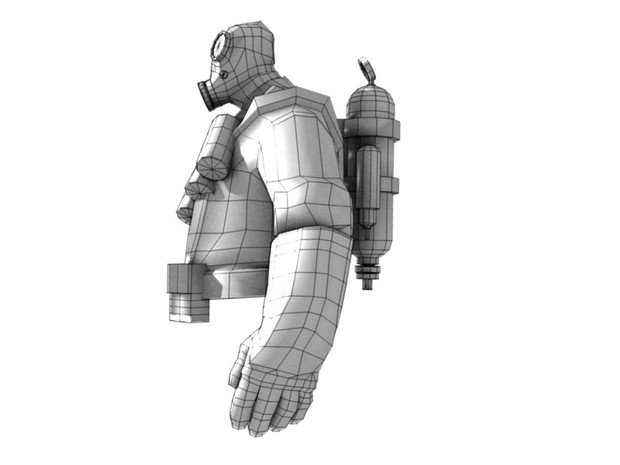 Perhaps it’s a nagging sense of financial welfare. The very same voice that keeps my soda off-brand and my furniture Ikea. The same sensibility that has prevented me to this day from being the proud owner of a Die Hard Arcade cabinet. Perhaps it’s this that is responsible for taking something I so lovingly see as an exceptional avenue for expression and funneling it into a single aspect. Artistic interest turned into frugal contemplation. From thrilled to thrifty. But that really can’t be the whole issue. I’m not some paragon of fiscal responsibility. My entertainment center is nothing short of a shrine to capitalism and the Macbook Pro I write this article on was purchased before my previous laptop even made so much as a single death rattle. Games are expensive and I need to know I’m buying a quality product before I drop $60.

Making judgments on graphics alone isn’t all that an illogical conclusion to land on either. Looking at a game is one third of how we interact with them. The other two being our brain’s interpretations and the following actions transmitted to the hands and back to the game through a controller. But before I can get my hands on a game, all I have are visuals. It becomes instinctual to rely on how sharp the edges look and how realistic the water can ripple to formulate a verdict. It’s a positive indication of time spent on production and it’s so easy to translate that into assuming quality. When the graphics don’t glisten and wow me with individually crafted textures, my opinion of the game involuntary suffers a few points. If a game looks closer to last generation graphics than current, I assume the quality of the game must follow suit.

I can recall a borderline unhealthy obsession with every shred of news about Fallout 3 prior to its release. Its very existence thrilled me. But when E3 dropped the first in-game footage, I recall a chunk of that excitement evaporate as I watched how rather glaringly brown and dull the environment was. I was, of course, aware the game environment was designed to replicate the apocalypse, but I suppose I hadn’t expected it to be so accurate. The jerky motions of the enemy characters – the strange lunges and standing-in-place shuffles – shook my reverence. Despite actually caring about wandering the wastes artfully crafted with surprises, intrigue, and that classic Vault Boy humor style, I let the shallow element of graphic sheen throw my opinion off track.

But when the game actually did come out, the graphic quality hardly even blipped on my radar. As I left the vault for the first time and my eyes adjusted to the harsh light, I did not focus on how detailed the rendering of the distant Lincoln Memorial happened to be. Instead, I stood quite literally dizzy with decisions. Where do I go? What are my skills? What is my character all about? How am I going to get by in the end times? Whether or not my .22 revolver – the only thing that separated me from death at the hands of demented savages – had the most detailed texture model possible never even crossed my mind. 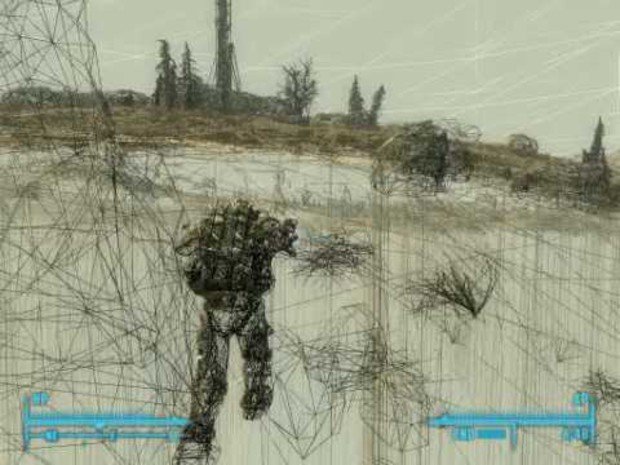 Sometime later, I stared wispy-eyed at footage and stills of the Xbox Live Arcade title Limbo, but after hearing the price I second-guessed myself, as did plenty of others. Simple graphic design automatically transmits the idea of an equally simple game. Was a 2D platformer that operated in only two colors worth this money? I asked myself this very question and, shortly after, attempted to run a steak knife into that part of my brain.

Because Limbo has so hauntingly beautiful to me, in a way that defied even the space of this article. I couldn’t explain why I felt such concern for a voiceless, expressionless boy lost in the woods. He was only a roughly-shaped-blob of a person, when all was said and done. The enemies weren’t much more themselves. But this is where the success of the game blew my mind. How I could find myself tensing fingers around my controller, suddenly filled with skin-crawling terror, by nothing more than a crudely shaped oval with six thin leg-reminiscent lines protruding from its edges. It was the roughest design of a spider you could compose, but my brain instantly understood and I feared for my otherwise happily dry pants.

Of course, it works both ways. After the unmitigated success of Braid, the gaming community (myself included) seemed to see Limbo as a success before it was even released, based solely on its risky and experimental take on regressive graphics. To assume a visually over-polished game must be lacking in other elements is just as presumptuous as seeing merit in an artistically stylized game before playing it. 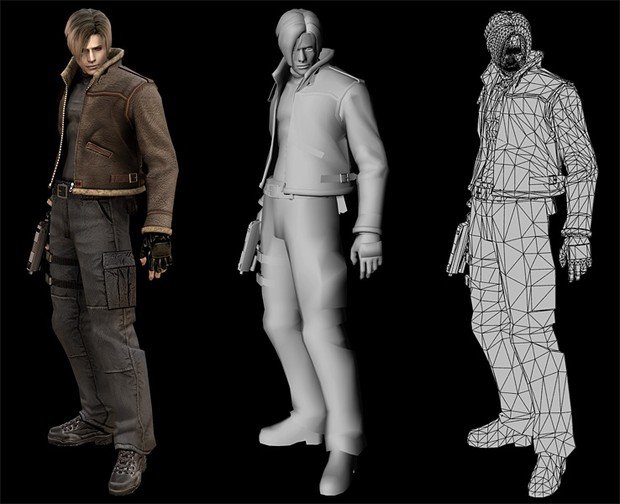 Either way you cut it, taking a game at face value is this medium’s version of judging a book by it’s cover. Graphics are a huge part of how we interact with games, but they represent only a minute benchmark of a much larger piece of work. Graphics have to be, of course, passable for it to be playable in the first place. But too quickly we shut down titles on appearances alone. The pixels stutter here or there and the edges of shadows aren’t smooth enough, so we dismiss the entire game as lacking of finishing polish. As if a poorly rendered explosion or stiffness to a character’s motion belies an undercurrent of neglect from the developers. This is an oversimplification so obtuse that it’s practically criminal.

So I admit my shame. I’ve given into marketing glitz and flashy visuals. A defect in my outlook that needs immediate correction. Especially considering that once, a long time ago, I snubbed the very idea of Gears of War as a dingy, lackluster, lifeless, derivative, space marine-looking pile of garbage upon first appearance of a measly handful of screenshots. Now I hail it as one of my favorite titles of all time. When games tease you with their flashiest moments or make you cringe with ugly cutscenes, it’s easy to fall into shallow tendencies and make naive critical decisions. But video games have a uniqueness that can’t be understated. Rather than a single, static, unchangeable experience, games are an intricate machine that displays ever-increasing complexity the more you bypass simple appearances and explore its dark corners. All games, even the ones that don’t size up graphically, deserve to be trod through to truly appraise their worth.