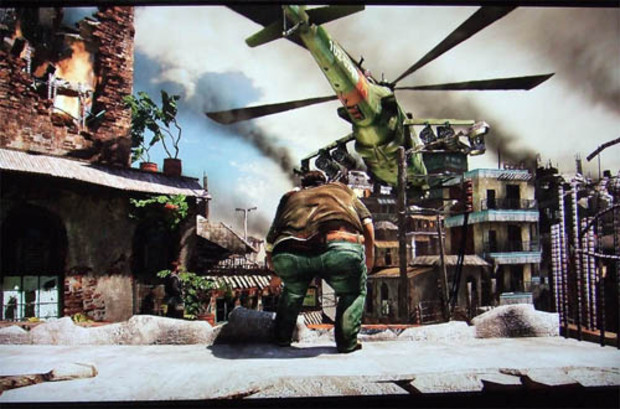 [For his monthly musing, fulldamage explains how a joke unlock in Uncharted 2 makes him think about the biases we have regarding the physical appearance of our video game heroes. Want to post your own Monthly Musing? Click on this and start writing! — JRo]

Harry and Nathan Drake are jumping across rooftops.
Harry: Come on.
Nate: Okay, I’m comin’, I’m comin’.
Nate makes a jump for the next building and catches onto the edge, which breaks away under his grasp. Harry catches Nate by the hand just before he falls.
Harry: …Gotcha.
Nate: Pull me up, pull me up!
Harry: (pulling Nate up) You put on weight, mate.
Nate: Oh, shit, that was close.
Harry: Whew, all right, no more donuts for you.

This is a sample of dialogue from Uncharted 2: Among Thieves. If you’re a typical gamer, chances are that you need no introduction to Naughty Dog’s latest effort. Nathan Drake (whose initials I have only just now realized are the same as the studio’s initials – damn, I’m good) is an Indiana Jones for the console generation and has been receiving tons of press. Determined, witty, athletic, Drake travels the ancient historical sites of the world, recovering treasures and artifacts from the darkest jungles and most treacherous ruins.

While I assume there has to be a healthy niche market for people who desperately need Genghis Khan’s backscratcher or ancient Mayan chamberpots or some such, it’s still hard to imagine a person would be willing to brave all the mercenary hordes, strange monsters, and missile-toting gunships that Drake runs into at every turn, just to recover collector’s items. He seems to do alright for himself, though. Here, have a look.

Whoa there. Not quite what you expected, eh? Well, let me provide a bit of context.

After completing a playthough, it is possible to unlock the “Doughnut Drake” skin for our illustrious title character, enabling you to supersize your death-defying adventurer. The skin isn’t perfect; they don’t touch the model’s skeleton or animation, so Drake’s hands and weapons tend to clip through his now sizeable gut when he moves or uses his weapons. But apart from that concession, the developer clearly put a little extra effort into making the skin itself look pretty good! They even lower the register of all of Drake’s VO, so he sounds heavier as well.

On my initial playthrough, Harry’s jab about “putting on weight” came off as typical action movie-style banter, snarky but harmless. I didn’t pay it a second thought. They’re both ripped musclemen anyway. It’s like hearing a 90-pound fashion model tell a 91-pound fashion model to lay off the food. The humor is thin (ha! don’t hit me), because you can’t take them seriously.

After finishing that playthrough, my roommate and I shrugged at each other, wishing that the game could have been a bit longer. Naughty Dog deserves its accolades for creating a sublime fusion of movie and game, and delivering one of the most masterfully, cinematically presented experiences of the current console generation. They may in fact have done their job a bit too well; we were hungry for more gameplay, but starting all over again, even at a harder difficulty level, felt somewhat akin to re-watching a good action movie immediately after finishing it. We just weren’t up for it right away.

And then, while halfheartedly thumbing through the unlocks, not quite ready to put the controller down and surrender the game to the victory shelf just yet, we noticed under unlockables the item “Doughnut Drake”.

“What on earth?” I murmured.

“We should at least check it out,” she yawned.

So we toggled the switch to on, and launched a new adventure – a “bigger” adventure than we could have possibly imagined.

Second time around, when Harry catches the now-huge Drake, straining to haul him up, telling him to lay off the doughnuts – all of a sudden, it wasn’t just glib cattiness, but an accurate insult. A really mean jab! And, helplessly, we cracked the fuck up.

I have to be honest with you here — I can’t be proud of our initial reaction. It started with a couple of amused snorts as we first caught sight of our newly hefty hero. Guilty chuckles continued as we maneuvered Doughnut Drake up the side of a series of train cars slowly falling off of the side of a cliff.

Frequently during this breathtaking opening sequence, some element of the scenery that Drake clings to will snap or crumble under his grasp. During a first playthrough, these tense little events help to keep the player engaged, feeling that every movement is precarious and that the slightest misstep might send Drake plunging to a screaming, frozen demise. These breakaway elements are mostly for effect; they happen automatically at set locations during your ascent, and none of them can actually make you fall — in fact it’s quite difficult to fail at this part.

Knowing all of this did not stop either of us from guffawing heartily each time a bar broke under Doughnut Drake’s pudgy grasp, or snickering every time a section of floor shifted under his heavy tread. During the first playthough our focus had purely been on survival, on outrunning the danger creeping up behind every cautious footfall. For Skinny Drake, this was just perilous business as usual. But for Doughnut Drake, it was rapidly becoming clear that a new perceptual element was in play. Each time the scenery gave way under Double D, something in our subconscious was cruelly implying that it was the hero’s fault, because LOL @ Fatty!

“This is wrong,” she cackled.

I have to make something clear at this point — I’m not leveling any kind of criticism at the developer in this regard. In point of fact I’d like to thank them. Because, intentionally or not, via the simple vehicle of adding an amusing skin to the set of unlocks for Uncharted, Naughty Dog created something new for us — a gameplay experience that had us reflecting on our own biases and preconceptions as we played, examining our attitudes with each step, considering our expectations of action movies and games. I doubt this was their specific intent – but that doesn’t matter. Because it made us ask questions anyway.

What would be so bad about having a chunky action hero?

It’s also important to note that the skin does nothing insofar as I can tell to affect the mechanics of gameplay. Double D is just as fast, nimble, and effective in a fight as his slimmer counterpart. But there’s a layer of perceived difference that is surprisingly difficult to overcome. You “feel” slower. You start running to make a hard jump earlier, and if you miss it, you want to believe that your hero’s doughnut problem is the culprit, not your own lack of dexterity.

There are tons of other hilarious moments to discover if you’re working on a doughnut playthrough. Every single time Drake has to squeeze through a crack or crawlspace, it’s hard to suppress at least a chuckle. And at one point, you flash back to a scene with Chloe, the game’s femme fatale, having a flirty interaction with a pre-rendered, skinny movie-quality Drake. When the flashback ends, returning you to a shivering, battered, easily 100 pounds heavier Drake, freezing to death on a lonely Tibetan mountainside, your mind wants to fill in the gap in time with details – what the hell happened to him to make him let himself go that badly? That girl has GOT to be bad news, amirite?

I could spend a couple of didactic paragraphs talking about our obsessions with food, body image, fitness, and heroes. But it’d be a bit beside the point — for this is where the game rose up head and shoulders above its competitors in the realms of literature and film, and made a point by using interactivity, rather than simply narrative. Because at this point, I realized that I wasn’t just making wisecracks or laughing at the fatty any more. In fact, I was having a blast. On a moment to moment basis, I was having more fun with this playthrough than I did the first time around!

There is something magical about watching a big dude fly through the air like a gymnast, clearing precipices and ledges like some kind of gourmand catburglar. There is something joyful and just plain fun about just observing him in motion, pulling off spectacular stunts that you simply wouldn’t expect a man of his stature to be capable of. If you’ve ever watched Sammo Hung in action, you might have an inkling of what I’m talking about. Big people in motion are amazing.

When Skinny Drake takes down an opponent, it is Jason Bourne-like, methodical, efficient. It’s what he’s built for, what you expect of him. When Doughnut Drake comes up behind a hapless merc and gets him in a headlock, crushing him to the ground and choking him out, well you just have to feel sorry for that poor bastard, because he was up against a force of nature. I can knock someone out with Skinny Drake, but to watch Double D leap off of the top landing of a staircase and come down like a ton of bricks on an enemy commando, well it feels – powerful. Authoritative. Badass.

I sure as hell wouldn’t mess with him.

As my other roommates come crowding in to see why we’ve been laughing and cheering for something like 30 minutes, their reactions are just as revealing, just as rewarding. They don’t game as much as I do, and don’t have as many preconceived notions about what a game hero is supposed to look like. One of them was completely, unabashedly thrilled. “Is that the hero? Seriously? For the whole game? Can he do everything that everyone else can? Oh my god, that’s awesome.”

You know what? It IS awesome.

It’ll be a while before I get around to really playing the whole game through again, but when I do, I have a feeling that I’ll be rolling with Double D. We can sit here and ponder why people expect their heroes to be skinny, sexy, and musclebound, but when it comes down to it, the issue is a bit recursive. This is what we expect to see because this is what we’re shown in movies and games everywhere. De facto. But that doesn’t mean it’s what we want or need.

By virtue of the element of participation, it sometimes happens that we can begin to empathize to a degree with just about any character that a developer can put on the screen – in fact, you kind of have to. Because while you’re playing, even if you don’t like the way they look or act, the hero’s struggle is your struggle. They move when you move. They die when you fail. When a threat approaches them, you get them out of the way. When they win, you cheer. I’m not saying all games can teach you any real life lessons – but for a while, they have the power to make you identify with someone who’s not you, even if it’s at a subconscious level. This is a virtue peculiar to games, and we should make a point of exploring and taking advantage of it.

Games can let us try on anyone’s shoes for a time – and 30 years ago, it wasn’t an action star or a sexy dame, but one fat plumber that changed the face of gaming and pop culture forever. Surely we owe it to him and to ourselves, to overcome our biases and make sure we look to more unconventional heroes from time to time.

You know, to ‘widen’ the playing field?