[For his Monthly Musing, mgspada tells us about the bias he had for Rare games, and how they finally lost his support. — JRo]

I wouldn’t typically consider myself a biased person. For the last three console generations, I’ve owned every console there is because I love video games. I can point out the positives and negatives in any console, past or present. I will defend when necessary, and strike when necessary. I can see both sides of every gaming issue, and have always been fair and balanced in my opinions.

Or should I say, until recently. Ever since I first played Banjo-Kazooie on the Nintendo 64, I’ve been madly in love with Rare. And even through their rough years when Microsoft first acquired them I defended them vehemently. But for someone to truly overcome bias and see the other side, be it light or dark, that person really needs a slap in the face. Well, consider my face slapped. Read on to find out the tragedy that is my love affair with Rare. 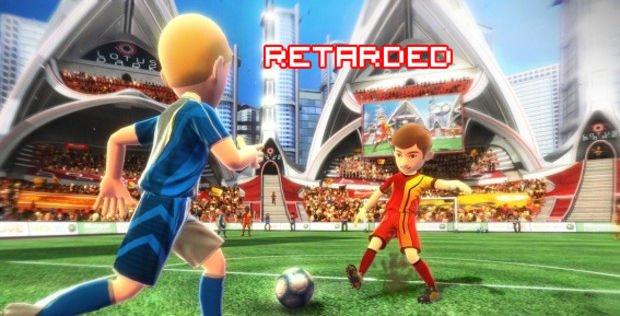 I can still remember the day back in 1997 or 1998, picking up an issue of EGM with Banjo and Kazooie on the front at my local Stop & Shop. I begged and pleaded for my mother to add it to our groceries as I did with just about every gaming magazine, and thankfully, she did. I read the issue cover to cover, but it was their feature on Banjo-Kazooie that took my breath away. I was 10 or 11 at the time, fresh off Super Mario 64, and was looking for something new to blow me out of the water. I found it. I couldn’t believe it: huge, open worlds, gorgeous graphics, funny and bizarre characters, out-there objectives; Mario was being dethroned! I saved up every cent of my allowance and pre-ordered the game at KB Toys. I can still feel the heat of the summer day when I went to pick it up and man, I did not put that game down.

After that, of course, was Banjo-Tooie in 2000, and I was hit with Stop ‘N’ Swop fever. Hitting up GameFAQs boards (shudder), becoming a member of the Rare Witch Project, and pointing out every weird thing that I noticed, I was hooked. The mystery and allure of this abandoned feature kept me playing and exploring those games far longer than I should have.

Banjo games aside, the N64 Era was all about Rare for me. Diddy Kong Racing, GoldenEye, Perfect Dark, Conker’s Bad Fur Day, even the lesser-known but still spectacular Blast Corps and Jet Force Gemini. I may have been young, but I was starting to recognize that golden R more and more at the start of many of the games that I loved. I even retroactively noticed them as part of my back catalog, realizing long after the fact that the folks at Rare were the masterminds behind the Donkey Kong Country series. Rare could do no wrong! 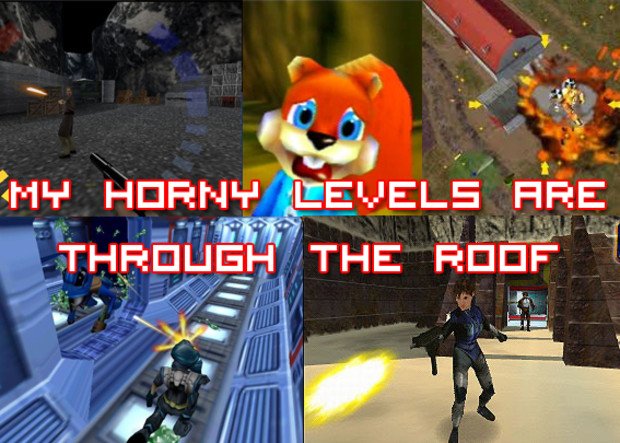 Then the unthinkable happened. Nintendo sold Rare to Microsoft. A Nintendo fanboy at the time, I was unbelievably pissed off. How dare they! Banjo and Conker and Joanna! They would be horrible on Microsoft’s console! Of course it wasn’t long after that I realized how stupid that sounded, but at the tender age of 16, having just been blown away by Rare’s brilliant Star Fox Adventures for the GameCube, I saw it as the end of the world.

So with Microsoft’s hands controlling Rare like a marionette, we saw a whopping two releases from them on the original Xbox. And that’s where the general public lost faith in Rare. But not me. Their previous games were so amazing that, by that logic, Grabbed by the Ghoulies and Conker: Live and Reloaded were among the greatest games of all time. I convinced myself that Ghoulies was a great game (and honestly, it was never THAT bad), and that I was blown away by Live and Reloaded’s updated visuals and enhanced multiplayer (I still play that version over the original). I convinced myself based on nothing but the games that Rare had made prior to those titles, not on the titles themselves. TEH BIAS was growing! 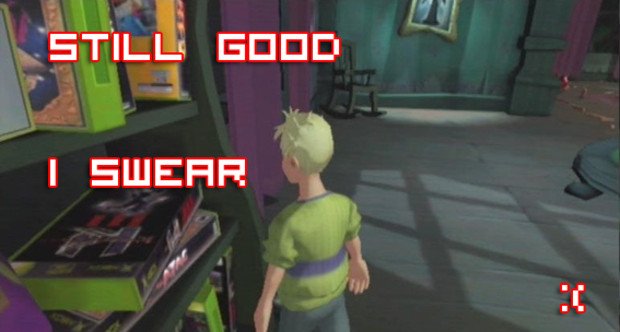 Then came the Xbox 360. Then came the shaking of my faith. These… these are still good games, right? Rare still knows how to make a good game, right?! Guys? Anyone? I have snacks! Perfect Dark Zero was lackluster but I convinced myself it was the launch rush. Kameo was alright at best, but I was certain that it was because no game comes out of development hell unscathed. Viva Pinata, I still say, is a terrific game, but it still didn’t feel 100% Rare to me. Overall, though, their 360 efforts were nothing to be proud of. Still, however, I convinced myself over and over again that they still had that magical touch. I just so badly for them to still be the same game developers that brought me such amazing memories back in the 64-bit era. But then came the ultimate test:

The third official entry in my all-time favorite video game series. The next-gen follow-up that would blow my mind. After a few duds that weren’t duds in my delusional and biased mind, could Rare pick themselves up and brush themselves off, and blow me away with another Banjo title?

In all honesty, it’s not a terrible game. I’d even say that it’s a good game. Absolutely gorgeous, a stunning soundtrack, sharp writing, and the vehicle building mechanic is solid. But it just didn’t do the trick for me, then or now. I understand the need to go in a new direction. But why not do that AFTER showing us what a real Banjo game would look like with these visuals? Just one more romp through Spiral Mountain performing Flip-Flaps and Talon Trots and Beak Busters. One more game full of amazing, lush worlds, ripe for exploration, with googly-eyed characters that had funny names and weird voices. Considering how ugly Nintendo 64 graphics look today, we NEEDED that next-gen boost to a traditional Banjo game before they went off doing anything crazy.

Instead, we got a game where you build vehicles and, for the most part, race them. There were many non-racing objectives, sure, but there’s just only so much you can do with vehicles. The level design left so much to be desired. It was wide-open and mechanical, unlike the expansive but packed natural worlds full of charm that the previous games had done so well. The only characters in the each level were characters from previous games, in lame costumes to fit the theme of the level. No level-exclusive characters. Where was my Clanker? Where was my Chris P. Bacon? God damn it, where was my Snorkel?! Why couldn’t Logbox 720 feature a lost IT snake asking me to fetch computer parts, and why couldn’t the Jiggoseum have a ‘roided up bull asking me for an added boost in his race? The worlds were so desolate! And the enemies were robotic balls! Where are my Mayan cats and weird goblins and angry slot machines? So much cleverness was taken away, and so much blandness and genericness inhabited what was once an incredibly hilarious and magical world. Why couldn’t Nutty Acres have angry squirrels attacking your vehicles, why couldn’t the Terrarium of Terror have evil Venus fly traps that would chew off random pieces of your car? 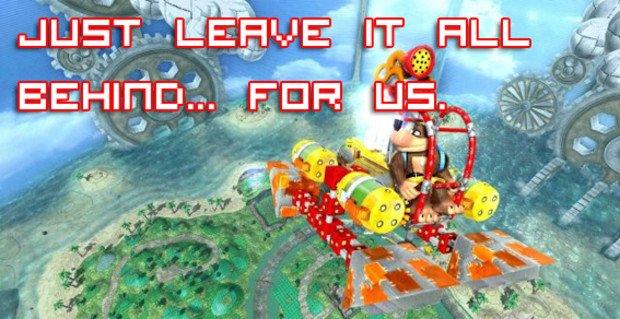 Since I still enjoyed the game, though, I figured, alright. That’s done. They did their different game. Now it’s time to get back into things. Back to the magic. You showed us you can do something new and exciting, now it’s time to take what made Banjo great and expand upon it instead of drastically changing it. You’re climbing out of the slump, just one or two more games, Rare, and I’m back in love. I won’t have to look like a fool for defending you for too much longer.

And now I’m done with Rare. Their final foray into fun and inventive games was a moderate success at best, and now they’re jumping head-first into the shitty, generic casual market. Their website even says, “Right now our main focus is on motion-controlled sporting glory.” They’re done with traditional games. Out. My faith is lost. It’s shattered. I’m depressed. Right up until Nuts & Bolts, I could defend them as an amazing company that’s just in a bit of a rut that they’re climbing out of. I would have their back no matter what. Through Ghoulies, through Kameo. And after all that, they just go and make a poor man’s Wii Sports. To add insult to injury, when MundoRare, a brilliant fan site that still defended Rare just as much as myself, gets shut down when they try to do something positive and showcase that Rare’s excellence is still in tact, well, you can see the proof right in front of you. They’re all done. It’s over.

The moral of the story is that bias can make you defend horrible, awful things, but you can only do it for so long. Anyone with even a quarter of a brain has to snap out of their bias sooner or later. People need to realize when enough is enough, when to throw in the towel and say there’s nothing more you can do. It’s like the defense attorney with a client that has evidence piling up, and then they go ahead and murder the judge right in front of the jury. You can only defend something for so long before you, too, start to look ridiculous.

You can blame Microsoft, you can blame Rare, you can blame the current climate of games. But what it all comes down to is that the company I once knew and loved, the company I put my reputation as a gamer on the line for, is no more, and I can no longer defend it. Rare has given me so many amazing gaming moments, and for that I thank them. But now, with a heavy heart, I must simply tell Rare: fuck off.

…but if they came out with a Kinect-only Banjo game I’d probably still get it.