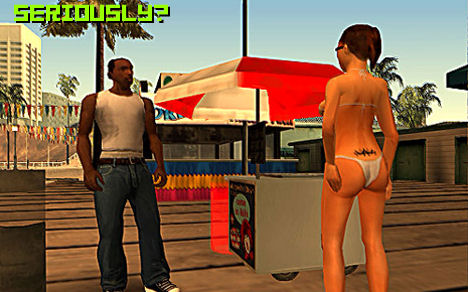 In a tale of what must be Massachusetts’ stupidest child, it has been reported that a thirteen-year old boy pulled a knife on his teacher for enough money to buy Grand Theft Auto: San Andreas.

Police Lt. Paul Shastany says… the male student stayed behind after the other students had left the classroom, pulled the 11-inch knife and asked for $20. After [the teacher] refused, he lowered his demand to $1. The teacher took the knife from the student.

Shastany says the boy wanted to buy the video game “Grand Theft Auto: San Andreas” but his mother refused to give him the money, so he came up with an alternate plan.

Now, I know what you’re all thinking. It’s not “wow, this makes videogames look bad,” or “wow, threatening a teach isn’t very clever.” You are all thinking — WHO THE HELL THREATENS TO STAB A MAN FOR SAN ANDREAS IN THE YEAR 2008!? WHO IN THEIR RIGHT EFFING MIND WOULD BE THAT DESPERATE FOR A FOUR-YEAR OLD GAME WITH GTA IV ALREADY OUT!? IF HE ONLY HAD A PS2, WHY DIDN’T HE AT LEAST DEMAND ENOUGH MONEY FOR A CURRENT-GEN CONSOLE AS WELL!? IS HE A FOOL? IS HE A STUPID FOOL? DID A VILLAGE IDIOT MATE WITH A BLOODY CELL TO CREATE A CHILD THAT DUMB!? WHAT AN UTTER FAILURE I HOPE HE HANGS FOR THIS!

Just giving voice to what was all on our minds. Jesus Christ, what an absolute buffoon. Seriously, it’s been a long time since I’ve heard of a criminal attempt so full of absolute fail.