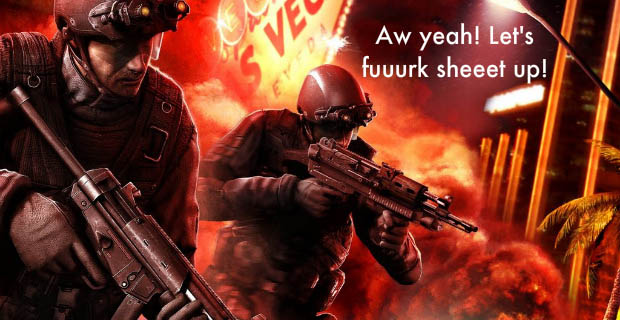 [We’ve been getting a ton of great entries for the Monthly Musing so far — enough that I can promote a blog every single day this week! Today’s blog is brought to you by Stevil, who discusses the decline and evolution of the difficult and unforgiving tactical shooter genre. There is also a jazzy chart. If you haven’t written a blog on the topic yet, I still need promotions for the rest of the month! Go ahead and post something, and you might end up seeing your work on the front page. – JRo]

If you’ve ever played the original Rainbow Six trilogy, then you’ll be acquainted with the Groundhog Day feeling that accompanies their missions.

A textbook hostage situation can become undeserved nightmare if you’ve badly timed an order or failed to recon a specific area, and so, after much resignation, you’ll begin Rescue Attempt #57 (and counting). Finally, with all mistakes rectified, you slice through the opposition like a ghost and it feels glorious.

Despite their frustrations, real time tactical shooters are sorely missing in today’s generation of videogames. The thinking man’s FPS has made way for accessible cinematic spectacles and while it’s justifiable, it does evidently point out how developers have always been reluctant to create them. The likes of Rainbow Six and SWAT have either mutated into action hybrids or completely slid off the map respectively.

With an increasing emphasis on better storytelling, what place does a tactical simulation have in these imaginative worlds?

The original Rainbow Six trilogy had plots, but political intrigue was paraded in the background. Your role was merely to guide specialists through tense last-resort situations. These were videogames primarily about tactics; level designs that focused heavily on stealth kills, timing, and team co-ordination. Much of the intensity comes from advantageous breaching and clearing, with fire-fights barely lasting a second.

The replay value, however, wasn’t created from success. It was based around failure and refinement, requiring you to tweak the planning stage repetitively until perfection. Even on the ground, you were continually improvising when you spotted unknown variables. With such a focus on hardcore strategy, it’s no wonder the original Rainbow Six would eventually become an acquired taste, especially when you move away from real world terrorism into something more fantastical and post-9/11, as with R6: Vegas.

So, how do you make something heavily focus on intimate combat and somehow entertain with narrative gratification simultaneously?

Nobody wants to repeat a lengthy set-piece because of failure, yet the same people don’t want to see a franchise lose its core identity to checkpoints and regenerative health. Unfortunately, you can’t have one without sacrificing another, and this theory can be put on a sliding scale with three major points:

Very few titles have that balance of narrative and tactics. When they do, it’s boiled down to a self-contained situation. A perfect example would be SWAT 4; probably the last real time tactical shooter of its kind and one that stands out from the crowd by telling stories through its presentation.

Two missions come to mind that assimilate the two factors smoothly – one is the infamous Fairfax Residence, and the other is a cult squatting in a derelict apartment. SWAT 4 streamlines the pre-stage planning and lets you command on the fly. By doing so, you’re already being thrust into the unknown. Now, add to that a scenario that gets increasingly horrific as you progress, with comrades becoming equally unnerved, and it’s a great recipe for cautionary atmospherics.

SWAT 4 is far from perfect, and the flaws lie within its realism. The team can only three hits before becoming incapacitated, and that’s fine for a one-off situation, but how do you make that work over a whole campaign, one where the characters need to stay alive for the sake of the narrative?

One prominent solution is to ditch the realism and turn NPCs into near-invincible bullet sponges. At a cost, tactics are streamlined to the point where you play a backseat driver, e.g. Kane & Lynch: Dead Men. WWII shooter Brothers in Arms is a similar streamlined franchise that tries to make you care about your fellow men, but what’s the point if they’ll always die in scripted scenes?

That’s obviously no good and it’s not going to appease anyone if you put them in a military simulation where nobody can actually die, e.g. Call of Duty. There’s a lack of risk/reward strategy involved and accompanying immersion breaking to boot.

So we turn to online co-op for our immersive risks. Videogames like Operation Flashpoint and Left 4 Dead offer some semblances of tactics in their plotted scenarios, but the communication comes from real people. The stories are there in-progress, but ultimately, the situations are slight in comparison to single player experiences such as Rainbow Six: Vegas to prevent endless déjà-vu with skill fluctuating comrades.

As we careen forwards into cinematic emulation, narrative and tactics are tectonic. You can be entertained as an actor ‘playing soldiers’ in Call of Duty or you endure frustration and reward as a simulated soldier in Rainbow Six. Either way, you can’t truly complain about a videogame being too hardcore or equally shallow in its approach because the middle ground is achieved with sliding scale sacrifices.