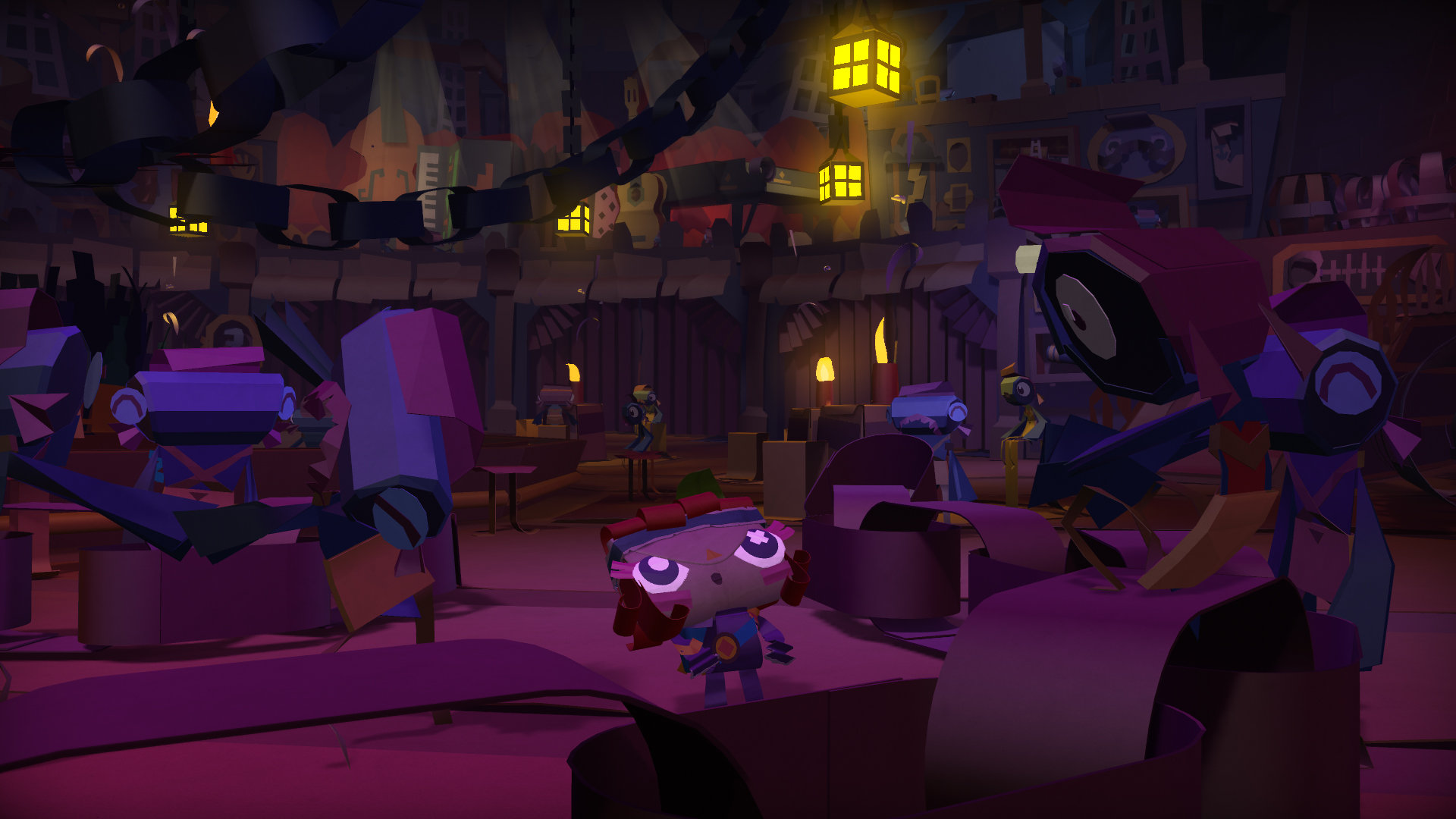 Tearaway was the zenith of the PlayStation Vita. While many fine games have hit the platform since, few have been exclusive and original, and none used every inch of the Vita’s additional capabilities to as good effect. That rare 10 out of 10 score near two years ago was the start of my waning interest in Sony’s abandoned system that, in its prior two years of existence, produced some of my favorites (Persona 4: Golden, Gravity Rush).

And so here we are with Tearaway Unfolded. It marks Sony’s continued Vita erasure; the handheld doesn’t even get E3 airtime. Tearaway was fundamentally designed for the Vita. The back touch pad is used extensively, the front-facing camera produced the Teletubbies sun god baby version of the You, the character you, the player, plays in the story. This is not just a port, but, at times, a dramatic re-imagining.

And yet it is good that Sony wouldn’t let Tearaway just die out on a console no one bought (or maybe it just wants to try and recoup its costs). I wouldn’t be surprised if a Gravity Rush PS4 port preceded a sequel, antsy as I am about the sequel already.

Tearaway used fourth-wall breaking about as much as Metal Gear Solid, which still, with the recently released Phantom Pain, has a character tell you to, “use the stance button to stand up.” That you are playing a video game is addressed, here through the physicality of the thing. Your own face in the sky, representations of your fingers popping up in the world.

Unfolded‘s entire opening is new. It plays off the home console’s position as a living room box, likely hooked up to a television with some kind of cable network. The two voices that narrate the story switch through a fake cable TV guide, hastily bypassing shows called “Rubbish” and flicking through commercials before coming to the conclusion that there’s nothing to watch, that there’s no good story. So we’ll have to make our own. Actually, it’s almost like the beginning of Metal Gear Solid 4.

The first new PS4 feature is light. The triggers produced a beam of light in the world that reflects the light emitted by the DualShock 4. It even keeps the same triangle shape and shows up in the world as if you were pointing to the front of the controller like a flashlight. So far it’s one of the only useful reasons for that light existing, save for draining battery life and then blinding me every time I tilt the thing up to find the charge port.

The You’s — that’s you — light has different effects, from simply illuminating the new, dim intro to making plants grow to scraping inky newspaper Scraps from the construction paper world to hypnotizing enemies that will follow the beam of light off a cliff. It doesn’t have the same punchy feel as poking at them with giant fingers from below, but it does its job of grounding the player in both the game world and real world in a novel way. It’s too hell with immersion and that’s fine.

Due to my lack of the PlayStation camera, I did find myself wanting with regard to my self-portrait showing up in the hole in the sky. Even if on the Vita it was grainy and always the least flattering angle (I never held my arms parallel to the ground when I played), it is missed, here. Same with the ability to, say, reupholster an elk by taking a picture of my cat. Of course, if lower case you have a camera, it’s possible to sustain these touches, or if you have a mic at the ready you can record an intimidating yell for your scarecrow.

A new gust of wind ability replaces your ability to physically leaf through the environment. Instead of swiping a platform down on the Vita screen, you swipe the DualShock 4 touchpad in the desired direction you want to the wind to blow. Atoi, the messenger you guide through Tearaway, can also throw enemies and items up “through” the TV screen and into your controller, and then you can aim a reticle and swipe forward on the touchpad to shoot the projectile back onto the map, whether to bash an enemy or solve a puzzle.

The touchpad is also used for the paper craft segments where you’re tasked with making wings for the local butterflies or snow flakes to pepper your mountain climb (I went again with some nice pink cherry blossoms).

It works alright, but the lack of real estate makes precision hard. You might consider the companion app, which would give you (or a friend) a larger drawing surface, but, again, I don’t want to be fiddling with three extra pieces of technological accessories just to get the same effect the Vita bundled up.

Tearaway Unfolded isn’t as elegant or holistic an experience as it was on Vita because of additional technical needs, but significant effort has gone to reproducing the same effects in new ways. It’s pretty as hell, too, holding its own with anything on the PS4 despite its humble beginnings. New areas have been built from scratch, parts extended, others cut. No more log rolling troubles, which is the only Vita feature that bugged the hell out of me. A lot of care went into Unfolded. It may be another tacit admission that the Vita is dead, but at least this incredible, surprising game did not die with it.