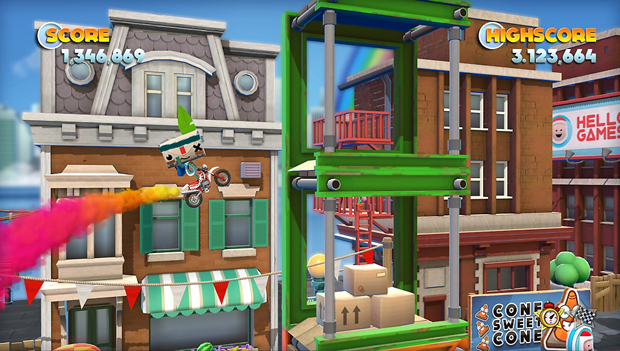 Forget Steve from Minecraft, play as Atoi or Iota instead

Before No Man’s Sky, there was Joe Danger 2, a lovable side-scrolling racing/platform game about a motorbike-riding daredevil. After appearing on Xbox 360, PC, and PlayStation 3, the game is now primed for its PS Vita debut, set for January 13 in North America and a day later in Europe.

If this will be your first time playing, you’re doing it right: Joe Danger 2 for PS Vita is the biggest version of the game yet. And it marks the return of Tearaway stars Atoi and Iota! They deserve all the love in the world, bless their little papercraft souls. LittleBigPlanet‘s Sackboy, the Team Fortress 2 cast, and Steve from Minecraft are also a part of the 35-character roster.

Should look slick on that gorgeous OLED screen. Runs at 60 frames per second, too.