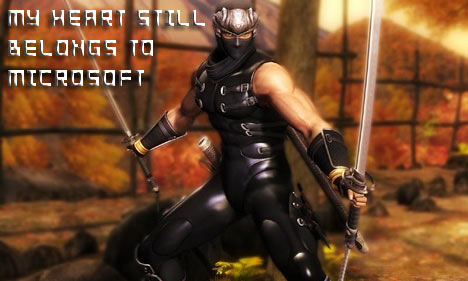 It looks like any hopes Xbox 360 owners may have regarding seeing Ninja Gaiden Sigma ported over from the PlayStation 3 have but all been dashed. Talking with Japan’s Famitsu Xbox 360, Tomonobu Itagaki had this to say about the whole deal:

“We’re getting requests to port Sigma to the Xbox 360, but we currently have no such plans. But no worries, 360 owners! Team Ninja is still supporting your platform.We’re taking new challenges on the Nintendo DS, and the same is true for the Xbox 360. In order to respond to our fans’ expectations, we’re always making sequels and new games.”

Since Xbox fans were already treated to Ninja Gaiden Black, and PlayStation 2 owners were left out in the cold last time, Itagaki has no qualms about his decision. Before you get all hateful, and decide to storm the gates of Team Ninja, I’d do a double-take on the last sentence in the first quote. That alone says a lot.

So I ask the Xbox 360 owners who were hoping to get away with not buying a PS3 due to the fact that most of the games seem to be Microsoft bound anyway — does this even matter?