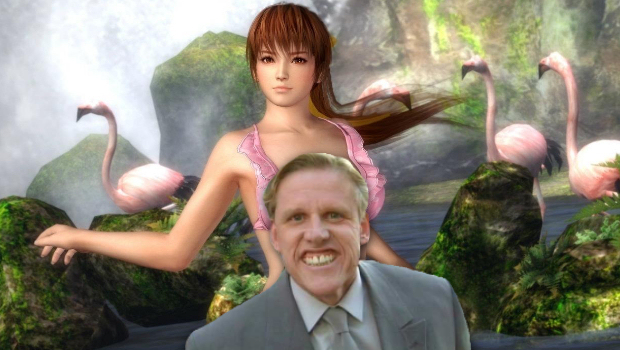 Team Ninja’s Yohei Shimbori has been justifying his studio’s love of massive breasts with inhuman wobble physics, claiming that while international distributors want the breasts toned down, fans are demanding even bigger boobs.

“There’s definitely still room for having sexualized aspects. If you have a solid fighting game system there, there’s nothing wrong with having beautiful characters as a layer on top of that — that’s another layer of entertainment that there’s a need for. If there wasn’t a need for it, people wouldn’t have responded to the alpha demo like they did, and send us feedback.”

Sexy characters are fine. What disturbs me is that for Team Ninja, sexy automatically (and exclusively) equals massive, unrealistically large breasts that move like caravans in a hurricane. That Shimbori uses “bigger breasts” and “beautiful” interchangeably, like they’re always the same thing, just speaks volumes about how infantile Team Ninja is about this shit.

Ultimately, I don’t find the Dead or Alive characters very sexy at all. They look like children (and some of them have been), with huge balloons made of skin stapled to their chests. They look like creepy sex dolls brought to life through some arcane means, existing only to mildly amuse the very worst of humanity with their physics-defying glands and high-pitched whimpering.

If you get off on that, more power to you … but eww.