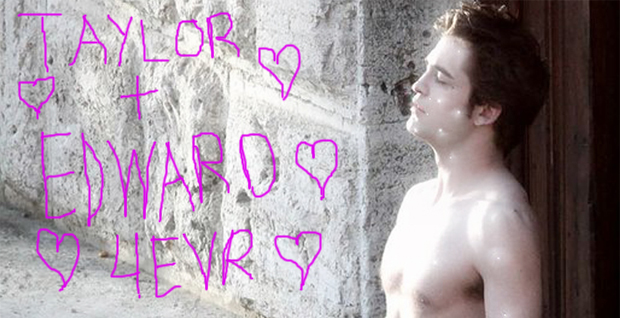 I really like cheesesteaks. I like them so much that I regularly, and far more often than I should, go to the mall for lunch just so I can eat at the cheesesteak place there. Yesterday I fell victim to my burning cheesesteak desire yet again, and made the trek across the street. As I walked through the mall, I happened to bump into Taylor Tiffany, Destructoid’s tween correspondent.

She was coming out of Hot Topic, which I thought was kind of strange because, when I was a kid, only weird goth kids shopped there, and Taylor insists that she’s very popular — definitely “more popular than stupid Kelly”. It didn’t add up until I saw that there was some poster advertising some sort of vampire something or other nonsense, and I guess one of the actors from the stupid vampire movie was in the store that day. Whatever.

Taylor Tiffany, though, was so excited she could barely speak. When she finally calmed down enough to be slightly coherent, she told me that in addition to finally seeing the man she wanted to marry, she overheard some really exciting video game news from one of the other girls in line. Then she started hyperventilating again. I just heard the words ‘Twilight’, ‘Wii’, and ‘DS’, and decided that I really did not want to be in front of Hot Topic anymore. Realizing that if I let her actually finish her sentence I would probably have to write something up, and being creeped out by the lock of hair she was clutching in her hand, I told her she should write whatever her news was up herself and went on to get my cheesesteak.

Hit the jump for her report.

OMG OMG 2day ~*~*~*Edward*~*~*~ was at the mall and OMG I GOT TO TOUCH HIM. And like their was this FAT girl behind me who kind of smelled gross and had weird acne and whatever and she was standing SOOOOOO close to me and it was like EW.

But then I herd her talk bout videogames, so I was like OKAY TAYLOR IT S JURNALISM TIME and I listened to her but tried to stay as far away as possible becuase she smelled weird. NEway she was going on about this game called Hay Low, which is like the stupidest name for a game EVER, but then I heard her talk about Twilight.

OMG THEY ARE MAKING A MOVIE GAME ABOUT TWILIGHT. I guess there is sum game called Seen It? and they are making one that is ALL ABOUT TWILIGHT just for the Wii and DS. So like the fat girl was saying that the game is going to be ENTIRELY about Twilight, and there’s going be new puzzle types that aren’t in regular Seen It?, and its gonna have bonus features like quizzes for finding out which character you are, and ways to throw the perfect Twilight party. I dont need the quiz, Bcause I already know I’m like Bella, but the fat girl will probably find out she’s a werewolf like Jacob. She looks like one LOL.

So then the fat girls mom brought her a milkshake from mcdonalds at the food court, and I was like OMG like you really need that, but I didnt say that Bcause I didn’t want her to sit on me. She drank the hole thing in like TEN SECONDS. OMG it was so gross. But then it was my turn to meet EDDDWWWAAAARRRDDD. As I went up to the table I heard fats say something like the Wii 1 was coming out this fall and that the DS 1 was coming in the spring. I am tots going to buy both of them!!