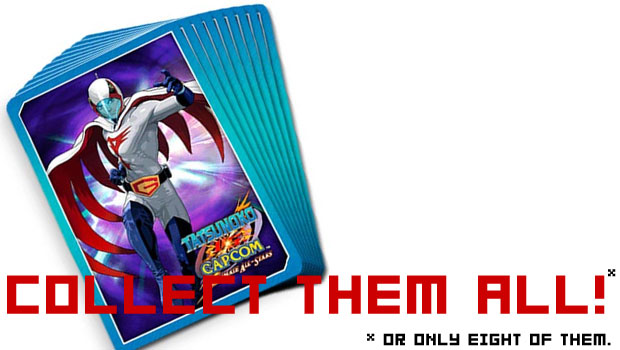 Full disclosure: The excitement in the headline is phony. I won’t pretend I’m interested in Tatsunoko vs. Capcom: Ultimate All Stars, but I will say that many on our staff are. Like, obsessively interested in this game. At our anniversary party earlier in the year, they played the Japanese version of the title projected on the side of our office building… until 5am. The cops were called.

So it was surprising when I let them know about this GameStop Tatsunuko vs. Capcom pre-order bonus — you get eight collectible trading cards. I told them about this two days ago, yet no one seemed to care. This particular story sat in our queue, gathering dusts. So I asked again, “Really? No one wants this story?”

Uh, these aren’t just trading cards. They’re “collectible trading cards,” part of a 12-card set featuring all of the game’s heroes. 100 of them are even signed by the game’s producer, Ryota Niitsuma. Neat, right? Tell Hamza he’s wrong guys. Tell him how awesome these cards are. Do it for me.