I might be the only one excited about the prospects of Windows Phone 7. Sure, it’s nothing like the current offerings of Apple and it’s wunderfone, but it is a fresh and exciting new way of doing mobile computing. One of the major tricks up it’s sleeve is the addition of full XBLA titles that will be incorporated into the Xbox Live family with full achievements and gaming on the go. Unfortunately, there really hasn’t been that much news on what exactly people will be playing once they get this OS in their hands.

Check out the video above: It’s test for memory leaks done by the one and only Nathan Fouts. Fouts, you might remember, is the creator of the XNA titles Weapon of Choice and Shoot 1UP,  as well as the upcoming Grapple Buggy. His Shoot 1UP is widely considered one of the best titles on the XNA Indie Games platform, and it is certainly fascinating to see the process of converting one Xbox Live title to a platform that shares much in common, yet is entirely different. There is still a lot up in the air for this title, as Shoot 1UP has not been made into an official WP7 XBLA title, and the game is still being ported over, if the above video wasn’t clear enough. Between the goal of launching with the Windows Phone 7 service, as well as adding new features to the game and improving the graphics, Fouts has a lot of work ahead of him. However, it is indicative of some new and exciting things for the service, Microsoft, and consumers.

Anyway, Fouts was thoughtful enough to answer a few questions about the WP7 version of Shoot 1UP, and what it means for players hoping to get their game on what is the closest thing to a hand-held Xbox. Follow the jump for a quick interview, and take a peek into the process for developing for Windows Phone 7. 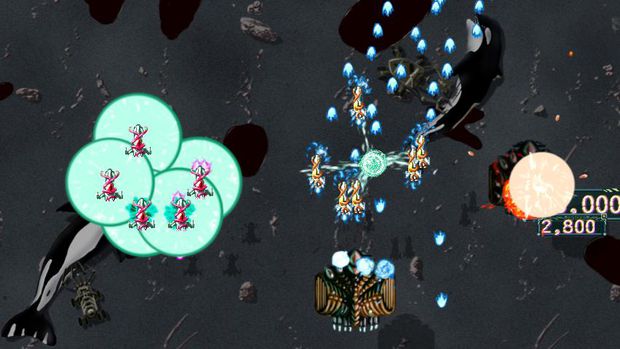 Destructoid: Is the port of Shoot 1UP going to be an official Xbox Live title with Achievement support?
Nathan Fouts: That’d be cool, right? Yeah, we’re talking to Microsoft as sweetly as email lets us, fingers crossed.

How are the controls for the game mapped if there is no controller?
NF: You can move around anywhere on the screen, and translates motion to the ships. Works pretty well, and we’re trying out having a blank space at the bottom for your finger.

As for attacks, at first I had it so you have to say “shoot” for every bullet but I started losing my voice playtesting :), so the ships default to auto-fire.  We’re testing it with auto-fire, and using two fingers to spread the ships (don’t be dirty) and fire the plasma auger, and two fingers to bring them back close. And possibly simply ‘tap’ to launch the shield if it’s ready.

What are the basic specs for titles that will run Windows Phone 7, or at least the games?
NF: It’s a little weird currently, but it’s supposed to be 256 MB, though we’re running into texture loading issues (thus, the smoke-test in the video helped us see how it all loaded and if it was working). And actually we just got sfx/music loading properly too, though it’s easy to overflow the textures still. So.. yeah.. 256, but not a whole of space (makes sense, just takes a little getting used to the smaller-than-Xbox-360 space, but of course we knew that going in.)

What is it like developing for a phone as opposed to XNA?
NF: It’s good, as we’re able to develop in XNA for the phone. We simply had to upgrade to the new version, then start squeezing everything in, resize graphics, load audio slightly differently, redo menus, figure out control schemes. It’s like it’s a lot of work and yet not. And I find it fun designing new gameplay.

Speaking of new gameplay, Shoot 1UP will feature an exclusive game mode for WP7 and an exclusive ship as well—both should be highly unusual in shmups and play to Shoot 1UP’s unique qualities (especially the “lots of ships” part). I keep up on twitter with MommysBestGames pretty well and update the Mommy’s Best Dev Log with news of Shoot 1UP and of course Grapple Buggy.