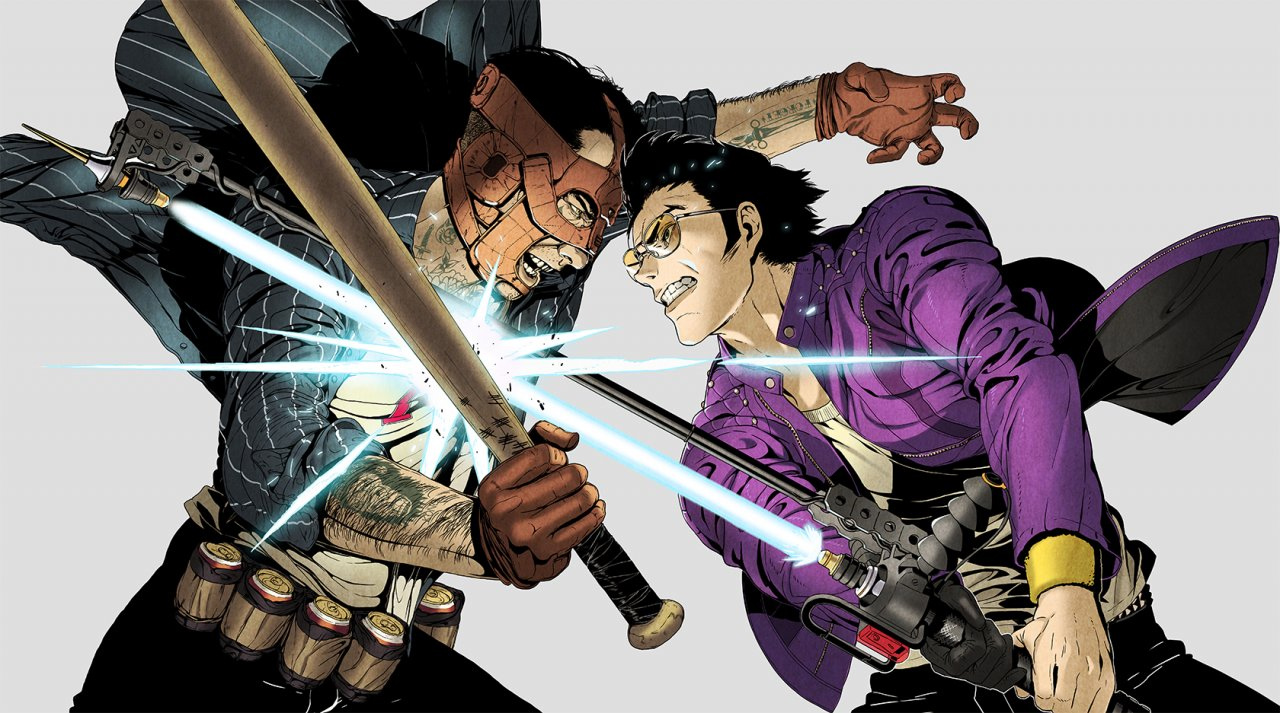 “Those shoes are good.”

Brett and I are at the top of a hotel in Seattle, high above the hustle and bustle of PAX West, to ask questions about Travis Strikes Again: No More Heroes. But we can’t help ourselves. Before we can discuss the newly-announced Nintendo Switch game, we first have to talk footwear.

“These shoes actually have a really cool secret about them,” explains translator and The Silver Case localizer James Mountain. “Nobody asked him about the shoes, so he was really glad that you guys brought it up because he’s been wanting to bust this out for somebody.”

Suda proceeds to prop out his foot and hold his phone as if he’s about to snap a quick photo. Nothing happens. Our curiosity builds. “It takes a second to load up,” Mountain reassures. “He’s not really sure exactly why but sometimes it just happens to work, sometimes it just doesn’t.”

Minutes later, the app, which was made specifically for Suda’s left shoe… still isn’t cooperating.

“All right, just go ahead and start the interview, and he’ll keep trying.”

On the name “Travis Strikes Again”

“He specifically didn’t want to call it No More Heroes 3,” says Mountain. “While it’s clearly in the same world, it’s clearly in the same series, it’s clearly connected to the previous games, he doesn’t want people to think of it as a direct sequel. He feels it’s more the start of a new adventure for Travis, and possibly even a new series for Travis. Again, while it is definitely the same universe, same timeline and everything, it’s not really a spinoff but sort of a separate entity. That’s why he purposely didn’t put a number in it and put ‘No More Heroes’ at the end, to make sure people could make that specific distinction.”

“Another reason he decided to make the title like this — and I mean not just literally the title, but the game itself also — is because he wanted to try something new. The previous games were Travis fighting the other assassins; you know, fighting his way up through the rankings. He wanted to do something a bit different from that this time. So, again, while it is the same character, same aesthetic, same general gameplay and everything, it certainly is a different type of game. And he wants everyone to realize right from the get-go that it is a No More Heroes game, but it’s a different kind of No More Heroes game.”

“The way this game is set up is there’s this console called the Death Drive Mk-II. The story behind the console is it was made way back in the day, it was announced, and it was actually created, but it was never made available on the market. The reason for that is because it’s dangerous. And the reason it’s dangerous is because when you put the Death Ball inside the console and load up the game, the player gets sucked into the game, and can end up getting killed. It was made but never actually put on the market so it’s sort of like a phantom console. There are six of these Death Balls that exist in the world, and there’s a mythology within [Travis Strikes Again] that says if you collect all six of these games, then you will have one wish granted. And so there’s obviously the main character Travis, and there’s another character named Badman. ([Suda] wants to stress this is with a ‘D,’ not like the guy from the comics.) Their goal is to get all six of these games and get their wish granted.”

Is it a race between Travis and Badman? Are they both trying to get the games at the same time?

“He feels that the Switch has a lot of possibilities as a console. There’s a lot of new things it’s trying out as a piece of hardware. There’s a lot of things he’d be able to do by putting the game on the Switch that he wouldn’t be able to do putting it on another console. So far, everyone’s been really supportive for him. The console itself is fun and easy to develop for. And as far as the type of game this is and the way controls are going to work out, it’s a perfect fit.”

“He really wants to take advantage of as many [Switch features] as possible. One thing that he really likes is the controller — not just for the Switch, but for the Wii as well. No More Heroes had a really characteristic way of using the Wii controller back in the day, and some of those features are going to carry over to the Switch as well, along with some new ones that he maybe hasn’t thought of yet or some that he has, but hasn’t implemented yet.”

“He decided from the very start that he’s going to make the game playable with only one Joy-Con,” Mountain translates, as Suda starts acting out a jerk-off motion to demonstrate how Travis charges his Beam Katana. “It’s really unfortunate that the size has shrunk a bit this time. At least he’s keeping the motion.”

“Also, there’s another reason he decided to make it playable on one controller: it would really raise the possibilities of getting an invitation to put Travis in Smash Bros.,” something Suda has publicly mentioned in the past. “I think maybe this time it might work out.”

“He wanted to show that Travis loves indie games, he supports indie games. If you saw the trailer, he’s playing Hotline Miami. At this point, what [Suda] can say concretely is that Travis is gonna be able to change t-shirts during the game, and it’s not going to have any affect at this point on abilities, but he’s going to have different t-shirts representing different indie games. Games he feels Travis as a character would be into himself. One of the reasons he’s come to PAX this time is to go around the floor, finding all these cool indie games, talking to these creators […] so far he’s gotten a pretty good response from most of the creators. There’s Hotline Miami and about 15 other games. No one’s told us to fuck off yet.”

“He certainly wants to do something a bit deeper than just [t-shirt cameos]. Especially with Hotline Miami, he’s been wanting to work with these guys for a while. He’s been talking a lot to Dennis [Wedin] and Jonatan [Söderström] from Dennaton Games about what they could possibly do [for Travis Strikes Again]. Although there isn’t anything that has been concretely decided and there’s nothing that he can elaborate on yet, if possible, he really does want to find a way to incorporate Jacket into the game somehow. He’s in talks with them to see if they can get some good ideas, to see what they can and can’t do.”

The secret of the shoes

With our interview running late, we had to quickly loop back to Suda’s shoes before we were forced out.

“Okay,” he said, hopping off the couch and heading toward the corner of the room.

The moment had finally come — and passed.

But after more fussing, suddenly, the app sprung to life. We heard sounds, and a symbol on the shoe — again, just the left — started pulsing to the beat of music from a band called Sakanaction.

[This interview was ever-so-lightly edited for brevity, and you can hear more about Badman’s funny MLB backstory in a separate piece from Brett. Special thanks to Steven for coming up with “good-shoes-wearer.” It will never not crack me up.]