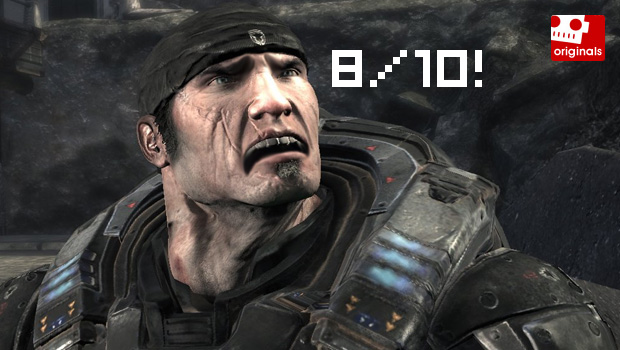 Gears of War 3 just hit retail, and the reviews were positive across the board, ranging from great to perfect. For most games, that would be more than enough to please both the title’s developers and fans, but in the case of Gears 3, there was something of an uproar when the game received “just an 8” by a few select outlets.

For a variety of reasons (not the least of which was that the gaming press has cultivated a culture where a game that receives less than a 9 is considered “sh*t” by many readers), many Gears fans came out fighting, claiming that giving Gears 3 an 8 was insulting at best and a “hate-filled lie” at worst. Others went so far as to say that the fact that some reviewers gave the game a score a whole two points lower is proof that review scores should be done away with entirely. They said that if there can’t be a 100% consensus on how many “factual points of fun” Gears of War 3 contains, then the whole idea of review scores must be destroyed.

Like last week’s scene with Nubageddon, I felt that this situation needed an outside perspective, so I went to the park to talk to a woman about it. I made the right move. I came away from our conversation with a fresh understanding of why Gears 3 was getting lower scores than Gears 2 from a few outlets, and a better feeling for what review scores are really all about.

Check out the video, then come along with me as I tell you the tale of “The Curse of Three”!

When a series reaches its third iteration, standards change. I’ve often thought that if Resident Evil 3 had been released before Resident Evil 2, then that game would be the most beloved in the PS1 Resident Evil trilogy. It’s just a better game than Resident Evil 2, yet it didn’t sell as well because by the time it was released, the standards of Resident Evil players had changed. It’s not exactly fair, but it’s far from uncommon. I’m not expecting that to happen with Gears 3, but that kind of thinking could explain why some reviewers (and gamers) don’t seem to be enjoying the game as much.

It’s the first game in any series that gets off the easiest. It’s like your first girlfriend/boyfriend. It doesn’t matter if the kissing is too drooly and bitey or if the conversation is dumb and boring. It’s kissing, and talking to the person who kisses you. On the lips! For most, that alone is amazing. I think that was true of how fans felt about the first Gears, as well as other first games in now-iconic gaming series like Super Mario Bros., Mega Man, Grand Theft Auto, Tomb Raider, the aforementioned Resident Evil, and many others. With these games, everything felt fresh, exciting, and unpredictable, like you were present for an important milestone in the life of gaming.

None of these games were guaranteed hits, so when they all got sequels, fans were giddy, sometimes blinded, with delight. That’s part of why the sequels to all of these games shared near-universal success. It didn’t matter if they told all-new stories with different characters (like Super Mario Bros. 2 or GTA: Vice City), or if they continued the scenario from the first title (like Mega Man 2 or Gears of War 2). These sequels just needed to do three things to make fans happy: be bigger, be prettier, and be packed with more stuff than the originals. At this stage in a relationship between the series and its fans, they’re so in love that they don’t need any new toys or tricks to spice things up. They just want more of the game they fell in love with.

Not only is that all that fans want out of their sequels, anything more than that will sometimes turn them off. Zelda II is often remembered as the worst Zelda game, not because it’s poorly made — the game is substantially bigger and better-looking than its predecessor — but because it’s too weird. Same goes for Devil May Cry 2, No More Heroes 2, and many other weird 2s. These games usually do well at retail initially, but not long after release, fans start to complain that the sequel is too different and that they just wanted to buy the first game again, except with more content. It’s common for these games to become the black sheep of their respective franchises, the ones that fans of the series often choose to forget. As many of us know, it doesn’t matter how smart, charming, or funny the weird kid is. They are still always the biggest targets, the easiest to brush off.

Now, when it comes to the third game in a series, things get really complicated. Gamers are no longer satisfied with bigger/better/more. They want that “new” feeling back again, but they also want familiarity. By this time, most fans feel like they are “on to” the series and its developers. They analyzed the prior games in the series for years, becoming familiar with the habits and idiosyncrasies of the games’ designers to the point where they often feel they know what makes the series great better than its creators do. You see this in film all the time as well, from Spider-Man 3 to Return of the Jedi. What will seem like “pretty much the same thing” to a non-fan will be “a total betrayal of everything that made the first two great” to a fan. One or two little musical numbers or too many villains and/or man-eating buck-toothed teddy bears is all it takes to go from classic to dud.

Game developers know this, and as a result, it’s common to see a strange combination of playing it safe and loads of new stuff in the third iteration of any given series. Whether the game succeeds or fails has everything to do with how well the new stuff stays true to the original game and how seamlessly it’s integrated into the classic content. Super Mario Bros. 3 saw the return of the Fire Flower and the Super Mushroom, but it also received an overworld map, airships, Kuribo’s Shoe, and the ability to fly. That’s why it’s probably the most beloved third game in any series in the history of gaming. Compare that to Ninja Gaiden 3 on the NES, a game that felt both too different from (evil clones of who? ancient ship of what?) and too similar to (same character graphics, same basic level design and gameplay concepts) its predecessors.

The survival of a series is sometimes entirely dependent on how well it can balance fresh ideas with the core concepts that define said series. That’s especially true if the game in question doesn’t have new hardware to back it up. Would GTA IV have been a hit if it had launched on the PS2? Same goes for Resident Evil 4 and the PS1 — could the game have revitalized the series without having new hardware to help it raise the bar? I don’t think so. That’s why the smartest time to release a third game in a series is when new hardware comes along. We can only imagine how Gears 3 would have been received if it waited for the next Microsoft console like Halo 3 did.

Back to the point: When something is too close to the original but still too different, I call it the “Bizarro effect,” named after Superman’s powerful but defective clone. It’s a bit like the old uncanny valley theory, where a near-human-looking robot is much more creepy than a robot that doesn’t even try for a human likeness. When a game (or anything else for that matter) is almost like something you love, but is just different enough to remind you that it’s not the one you love, it’s incredibly easy to hate. That’s why I think N’Sync fans hated the Backstreet Boys, or why I thought my high-school girlfriend was incredibly cute while her slightly greasier, meaner sister was the most disgusting thing ever.

It seems that the third game in a series is most likely to suffer from the Bizarro effect. Super Smash Bros. Brawl, the aforementioned Bonk’s Adventure 3, and perhaps Gears of War 3 all suffer from it. It’s not fair that these games get the shaft, but that’s what “The Curse of Three” is all about.

So, those of you who’ve now picked up Gears of War 3: do you see why some people didn’t enjoy it as much as Gears of War 2? If so, do you think that it is because of your altered perception and higher standards for the series as a whole, or is it just because the game isn’t as fun?