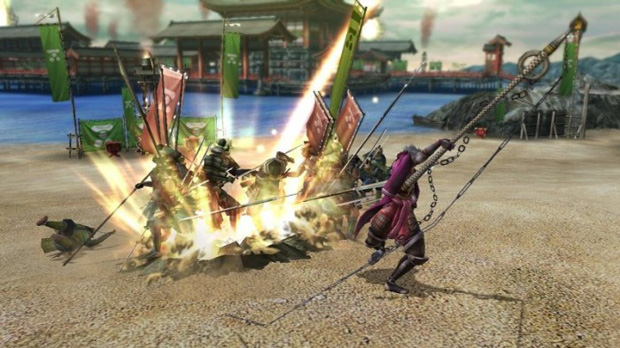 Despite my best efforts, there will always be times when certain games go under my radar, and Sengoku Basara Samurai Heroes was one of them.

When I was sent to the Capcom booth at PAX for this interview, I really wasn’t sure what I was getting myself into. But when Product Marketing Manager Eric Monacelli was speaking, I realized that while this series may not be big on our shores, it’s taken Japan by storm. (This will be the first game to hit our shelves with the Sengoku title; Devil Kings is as close as we got, a heavily-localized version of a PlayStation 2 Sengoku title.)

Set in feudal Japan and riddled with Japanese history, the game (from the producer of Devil May Cry 4) is an over-the-top action game. But Eric does take time to tell me why Sengoku Basara Samurai Heroes is different from other big titles of a similar vein, such as Dynasty Warriors.

Sengoku Basara Samurai Heroes has already been out in Japan for over a month, and according to Eric, it’s so successful it’s a game that’s moving consoles. Due out October 12 in North America and October 15 in Europe, it already has some members of staff pretty excited (guess who), and will be available for PlayStation 3 and Wii.