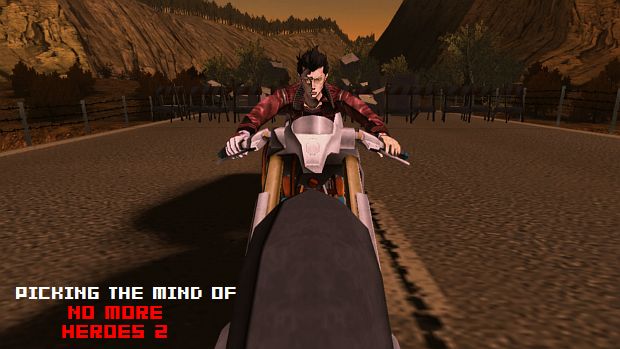 Suda 51 is one divisive character, at least when it comes to his videogames. No More Heroes and Killer 7 are games that people either love or hate. An easy enough situation to have, as cel-shaded, stylized, and bat-s**t crazy games are not going to have the broadest appeal.

A quiet, sharply dressed man rocking a scarf was not the Suda 51 I expected to find. Wouldn’t he be busy doing some punk stuff somewhere? He wouldn’t be this soft-spoken gentleman standing in front of me…would he? And yes it’s true. Behind the games, the snazzy business cards, the wacky mantra of “Punx not dead”, Suda 51 was not the man I expected him to be.

So it was appropriate that, sitting in the cafeteria of Ubisoft’s San Francisco’s office, I was able to pick the brain of the man who is working to challenge what can and cannot define a game. Quiet and dignified, it was like having a normal conversation with any other developer, except everything he said was in Japanese, and I needed a translator. But what followed was an interesting look at what inspires the man, and especially how he views developing for both Western and Japanese audiences. Follow the jump to see what I mean.

Now let’s be real, the conversation I had was a second-hand discussion through Taiki Homma, who not only woks as Associate Producer at Ubisoft, but can handle his Japanese pretty well. Between the three of us, we were able to pick Suda’s mind on the nature of game, Western and Japanese game design, as well as what actually inspires the man.

First up was a question on the nature of symbolism. Suda 51’s games, as opposed to say, a Mario game, are certainly one for our friends in the Philosophy department at your nearby community college. You can’t sit through the insanity of No More Heroes, or especially Killer 7, without trying to untangle their convoluted insanity.

After a short pause from Suda, then a quick flurry of words, Homma said, “He loves the fact that fans analyze what Sudo-san is actually trying to portray in the game. He does admit that there are certain parts that he is trying to get across using symbolism, but there are also things that he didn’t think about. So he loves that kind of conversation between fans and himself. Yes, he loves that part.”

More than just the fans that are inspired by his work, I wanted to ask him what inspires Suda to get up every day and make videogames. Music, films, even the games he himself plays. As it turns out, for No More Heroes 2, “He listens to punk and post-punk music, with The Smiths and Joy Division. And that’s where he got inspiration for the music [of the game].” And while they were not as influential to the creation of this game title, “he does listen to The Ramones and the Clash, but the thing is, the most inspiration he got was from Joy Division and The Smiths.”

After some pressure, and an ambiguous response about films (“He says he pretty much watches everything. Modern movies.”), we got talking about what he’s been playing. His response was somewhat surprising: “Right now, Uncharted 2.”  From which Suda jumped in in English to say “Very good.”

“He bought Modern Warfare 2, but he hasn’t had the chance to play it. He pretty much plays any game that’s in the news.” Even more interesting is that “He’s thinking the taste in games he plays is pretty much in line with the European and American market.” It’s surprising, for while the developer for games that are distinctly Japanese, he has a taste that is markedly Western.

It was at this point that Suda pointed out that his Grasshopper representative next to him, saying that she was very good at Call of Duty, and the whole table broke out in laughter. You might have had to be there, when I told him that if he ever decides to play Left 4 Dead 2, I’d play with him. From which he responded that he hasn’t gotten around to the second one. I’m still waiting for the Live Friend request.

Our conversation that this point turned to development, how No More Heroes and No More Heroes 2 stands as titles with strong Japanese, as well as Western themes and ideas. I asked him about this, how he develops stories that can influence these different cultures. Through Homme: “So actually, he does have the confidence to make a 100 percent gory game,” referring to Western gaming preferences, or at least the stereotype of.  “[He can] Make it for the US, but the fact of the matter is, he is a Japanese developer, so there is some sort of essence that does come across when he is making this type of game.”

“The reason why it has that essence of Japanese is because he is a Japanese developer. He does think he can make both, that’s probably why it seems it is fused.”

“He says, to be honest, it is very hard to incorporate both the feedback from the US and Japan to make a logical game. There is just a difference in the market,” When I asked him if he was pleased with the Japanese and Western response to his games. “For No More Heroes 2, we were able to work with Ubisoft pretty quickly in the process, so he was able to fuse it a little better. With the Japanese style he is making it and also the American-European market views that Ubisoft has. He thinks it’s a good mix.

In the end, Suda was quick to turn things back to his fans. After all, No More Heroes 2 was designed to please people who were drawn to the original. He offered this explanation, with “He believes that he was able to make this game for the fans and by the fans, because he was able to use feedback from the fans and actually incorporate this in the game. He thinks he made a game that is a very good representation of the # 1 action game on the Wii. It’s a bunch of small fixes that he made that made the game a lot more enjoyable, so he wants everyone to go to the stores on January 26, go get the game and have fun just playing the game.”