How past Grasshopper games influenced their latest title

XSEED Games and Grasshopper Manufacture’s Suda51 showed us Killer Is Dead this past week during the Game Developers Conference here in San Francisco. Once we were done checking out the gameplay, XSEED opened up the meeting to let us pick Suda51’s brain.

Suda51 is always fun to talk to, and this time was no different. The face of Grasshopper detailed a lot to us, from some of the influences that helped shape Killer Is Dead, what’s going on with the soundtrack, and how the Samurai Champloo game changed everything for the development studio.

On the name Killer Is Dead

“I’m a fan of [The Smiths], the band, and they have a song called The Queen Is Dead. This was just a tentative title and I just switched out the Queen with Killer. There was talk that let’s change the title to something else [as] it was sort of vague that it really doesn’t describe anything. And then grammatically it might be incorrect, but I thought it gave more uniqueness that really matched what the gameplay was about so we decided to leave it.”

Suda51 confirmed that Akira Yamaoka is indeed heading up the soundtrack to Killer Is Dead. As for what we can expect out of the music, Suda51 doesn’t even know.

“In the very beginning I explained what the concept of this game is about and what I’m trying to do within the game. After that we came up with a few ideas of what to do, and did some idea exchanges. But other than that I just threw the whole thing at [Akira]. At this time he’s still working in the Tokyo office, still chugging away.”

On the Flower, Sun, and Rain connection

“There is some kind of similarity because Sumio Mondo was wearing a suit as well, and I just like that character. I don’t know, they just look similar. And then I liked the name Mondo so I decided to make him in a more action game this time. Originally I was thinking about Mondo Smith, but it’s a little close to Sumio Mondo so we decided to change it.”

Both Mondos are two totally different characters, but they do share influences. “Just think of them like long distant cousins, or relatives,” Suda said.

“I’m surprised you’d remember that, I sort of forgot! That was something that I really liked, and I wanted to put that in a HD format and I think in Killer Is Dead I was able to achieve that.”

On the James Bond inspiration

“For this title, there isn’t specifically a Bond movie, it was just that 007 as a series. He’s a British agent that goes into different places, different countries to solve something. That was the backbone of how we created this.

“My personal favorite is probably Living Daylights. I really liked the theme song, that’s my favorite Bond movie. I don’t think that many people say that’s their favorite [laughs]. It has that uniqueness that I really like.”

On any influences from Killer 7

I wasn’t really specifically thinking about Killer 7 when I was doing [Killer is Dead], but I think it’s just a compilation of all the stuff that I was creating. This theme of executioner and the Killer 7 kind of matches. There’s a lot of stuff that I’m utilizing from the back catalog, and ideas that I had. Nothing really specific that connects those two together. 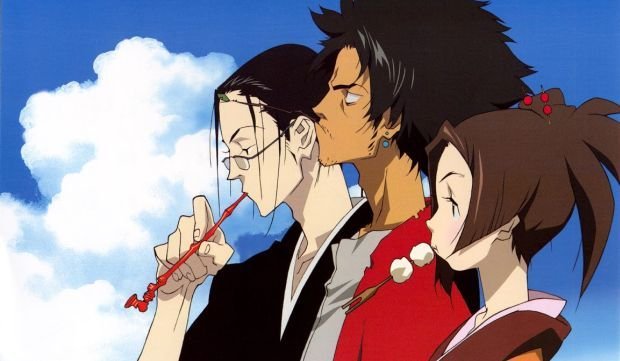 When asked about why Grasshopper games continue to focus on melee combat action, Suda 51 said that he thinks it’s a culture thing as Japan used to be a sword country. “I think it’s in my DNA or genes,” Suda51 told us.

Yet before the success of No More Heroes, Grasshopper had another successful title on their hands with Killer 7, a game that was primarily shooting focused. So how did the design direction shift come about?

“After Killer 7 we played around with a title called Samurai Champloo, and then from there the idea became No More Heroes. When we created No More Heroes and launched that it did really well in Japan, and abroad, and in the US [it was] highly recognized.”

“And like the culture thing, I think it sort of spread throughout our staff members and they got the know how of what to do. From there it’s sort of based on that, it did well, we really liked the slash action, and it just sort of continued on from there.”

Suda specifically cited understanding the know how of going up close to an enemy and killing them while designing the Samurai Champloo game as being one of the major inspirations for No More Heroes, and pretty much everything else since.