I met with Kei Hirono, producer on Dark Souls and the upcoming RPG Time and Eternity, at a local hotel. From the ornate, spacious lobby I was guided by an amiable PR fellow around a couple of twists and turns, up a 10-stair, out of commission escalator — and around a corner to a cozy, severed alcove with several burgundy chairs and low, ambient lighting. Hirono was eating lunch. Some sort of sandwich. It smelled delicious and I had to curb my own hunger. Another afternoon where I haven’t made time to eat yet.

Time and Eternity is at first glance a typical JRPG. I don’t think the announcement trailer, complete with over enthused, comically amorous narration necessarily does it any favors. But then things get complicated, as my talk with Hirono rejects certain aspects of the genre, while retaining others. In some sense, this is like an anti-Tales — also a Namco Bandai production — which has my attention.

The players involved outside of Namco Bandai have my attention as well. Time and Eternity is being developed by the very-JRPG-ish Imageepoch, in conjunction with Japanese animation studio Satelight (Macross). The music comes courtesy of composer Yuzo Koshiro, known for his work on Streets of Rage, Ys, Etrian Odyssey, and more.

When Hirono finished his sandwich we were properly introduced. He’s an impressive looking man — I had ample time to study him as I waited for questions to be translated, answered, and then the answers translated. His meticulously distressed, slicked back hair reminded me of the incontrovertible Toshiro Mifune in Akira Kurosawa’s Drunken Angel. He had on some sort of crushed velvet blazer, a white button up, dark washed jeans, and shining, obsidian shoes. I walked in feeling good about my look, but I may have just been out classed. The accessories were sparse, but bold. Always tasteful. A black watch with a minimalist face, a sleek ring or two, a modern man wrist adornment on his non-watch hand. I was suitably impressed. Oh, right, I was asking questions about videogames.

The first thing that stands out is the art style. Time and Eternity features fully 2D character models in a 3D navigable world. We’ve had a lot of games based on 2D properties finally start coming into their own of late with more advanced cel shading and whatever techniques were used to make Ni no Kuni so damn attractive, but pure, hand drawn 2D animation in a 3D sphere isn’t something I’ve ever seen. I’ll have a piece up soon going into more detail about making things work from a technical perspective, as well as the company’s trip to Taiwan to seek out the perfect illustrator, but for now you can look at the pretty pictures.

I had seen screens of Time and Eternity prior to the interview and little else, so I had Hirono give me the full skinny on what the deal is with the game, aside from being a pretty, anime-looking JRPG. More recently I read Japanator’s scathing import review of the Japanese version and cringed as all my concerns seem to have come true. Yikes. Well, onward into the abyss. 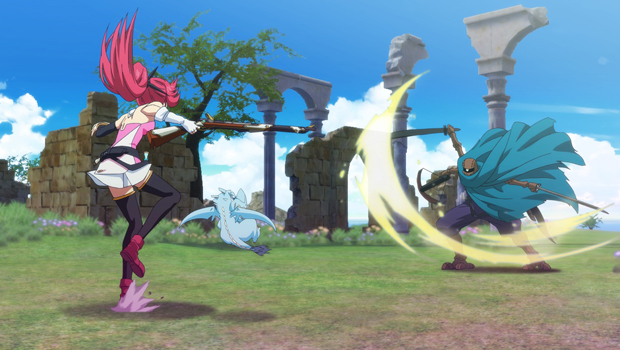 The main character — you, dear player — is actually a weedy, blue-haired bloke. The game opens with his wedding day. He’ll be marrying Toki. Then things go awry in a manner Kill Bill fans can appreciate and the main character, old blue locks, is left dead. Meanwhile, Toki reveals an affinity for time magic, as well as the secondary persona living within her, Towa.

Unlike your typical JRPG, the goal of the game isn’t to save the world. It’s to get married. Madness, right? I’m not sure why blue locks is referred to as the main character, though, as you’ll be playing as either Toki or towhead Towa, traveling back in time with dead fiancé in tow (he’s possessed the form of a tiny dragon) in order to right the wrongs of the past and make sure your wedding day goes off without a hitch.

So we’ve got some death and serious themes, but if that last paragraph didn’t make it evident enough, the game will be tempered with humor and lighthearted tone throughout. “With the current state of things, there aren’t many things like that. Games are either far one way or far the other way,” Hirono explains. I appreciate injecting some levity into a serious backbone — more titles could stand to do that — though we’ll see how the comedic elements fare getting put through the localization ringer.

Despite being quite “Oh, Japan,” and effectively being anime, Time and Eternity is doing some things differently. For example, the player alternates between control of Toki and Towa after each level up, which could throw a bit of a wrench into your strategies. Toki excels at a distance and with magic, while Towa is a more upfront, offensive fighter. This duality means there are different dialogue bits depending which character you’re using at any given time, which could add to the replay value, and there are even hints towards some emotional binary choice down the line relating to the two women. My bold guess is that you’ll have to pick one. 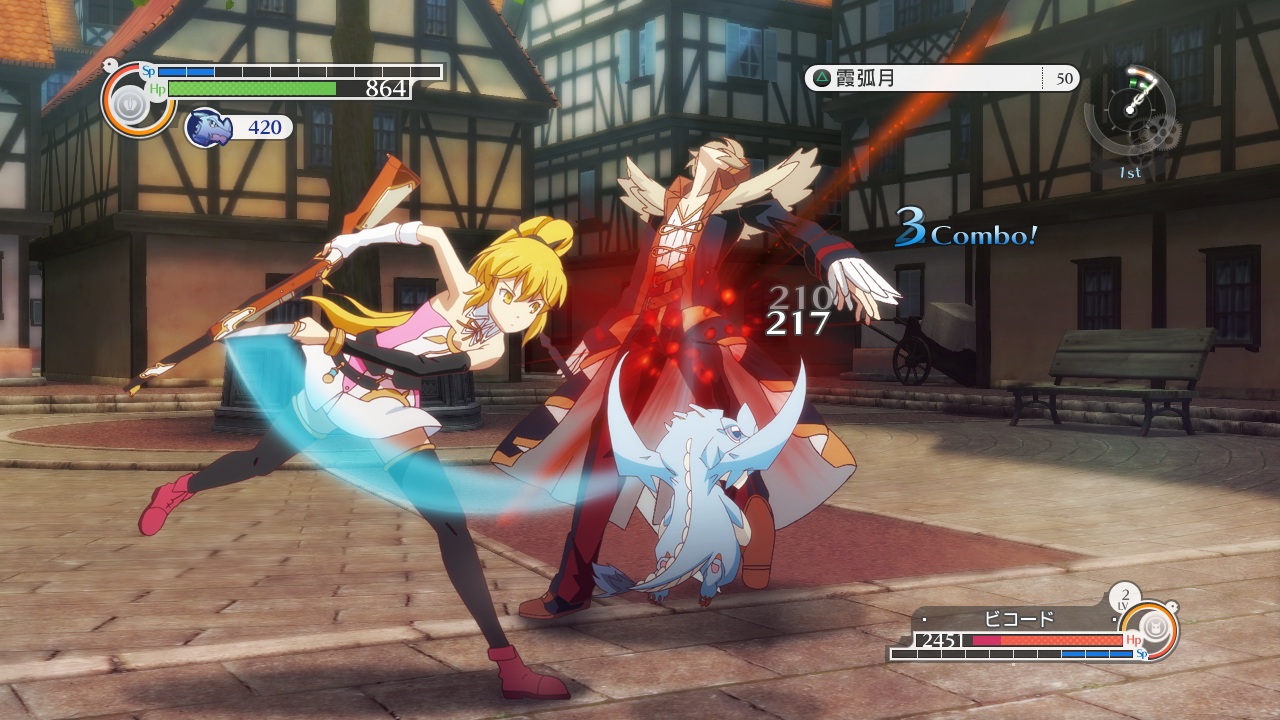 Still, it’s nice to see a less conventional framework for the narrative to match the wholly unconventional art style. When talking influences, Hirono cited Final Fantasy X, “and the reason for that is emotional impact,” he said. “Up until then, in the field of entertainment, you had movies, which could make you cry, and manga which could make you cry,” but he never saw games in the same light until Final Fantasy’s PlayStation 2 debut.

While he says he’s not sure he’s done it yet, Hirono says that, as a producer, his goal is the make games with a strong emotional impact on the player. When I mentioned Dark Souls might’ve made some people cry, albeit not in the same sense, I elicited a laugh even pre-translation. Not sure if the joke was that good that it transcended the language barrier or if it was that overdone.

Perhaps the most interesting thing I took away from the interview is this admission, when I asked if his prior work on the Tales series influenced Time and Eternity in any way: “One of the biggest intellectual or artistic triggers or cues from [the Tales Series] was to make a game not like that.” I can dig that.