From DUSK till dawn

With the release of DUSK onto Steam Early Access last month, old-school first-person shooter fans have been in heaven. The game captures the glory of games like Quake and Doom while providing modern compatibility and startling creativity. What more could you possibly want? How else will this game expand?

To figure out where this modern classic is going, I chatted with New Blood Interactive’s producer Dave Oshry and DUSK designer David Szymanski and asked about the upcoming Episode Three, mod support, and the creative process behind building the levels we already have. It turns out that Quake wasn’t the only thing on David’s mind. 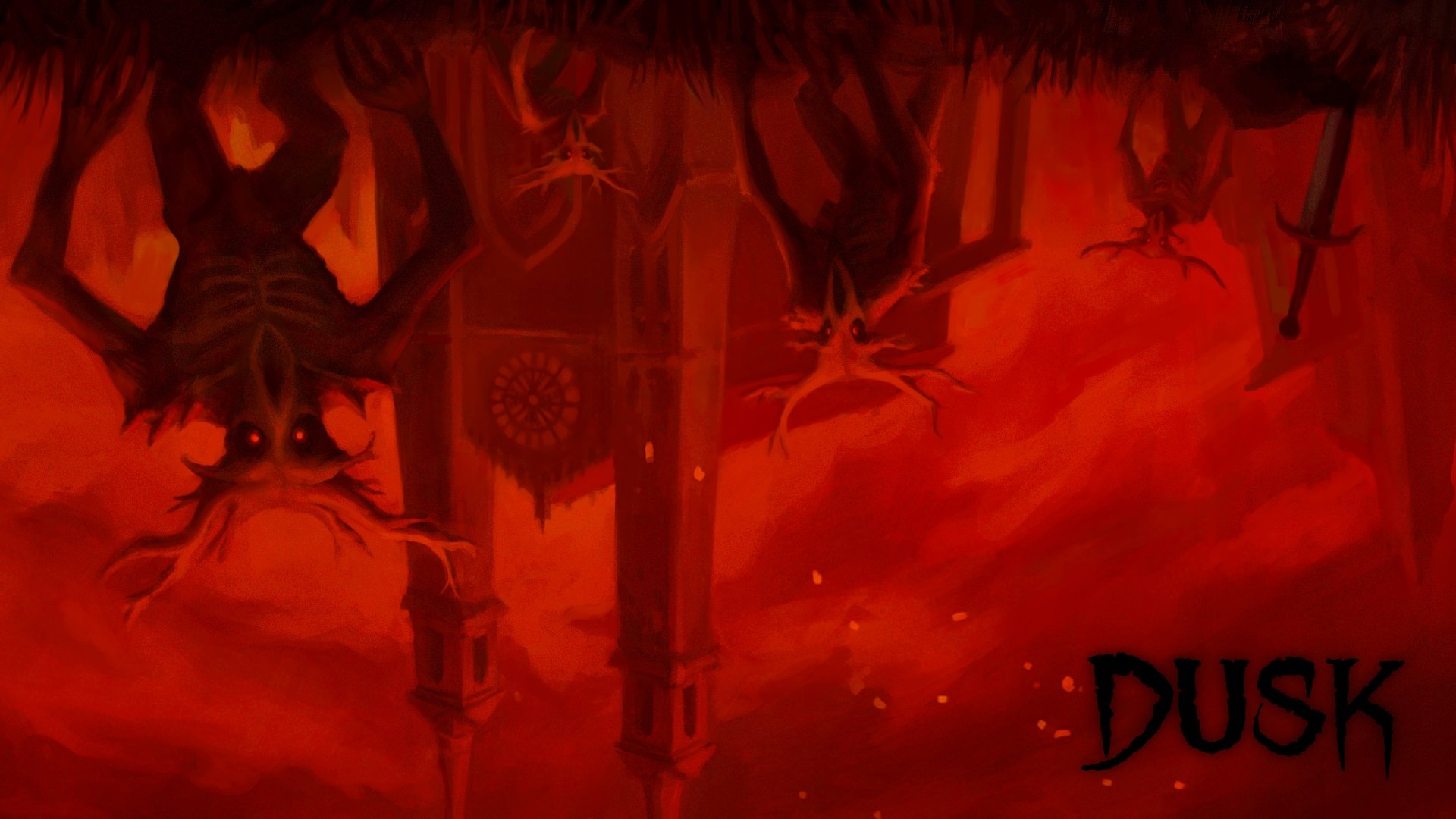 To start off, one of the many tidbits I had read about DUSK prior to setting this interview up was that David came up with the inspiration for the game during a period where he didn’t have access to a PC powerful enough to play modern games. Failing to actually relocate the source of this story, I asked David if that story was true.

While it definitely was fact, it didn’t happen immediately prior to DUSK’s development.  “When I was younger around the time people were playing Half-Life 2 and Doom 3,” David recounts, “I didn’t have a computer that could run anything like that. My computer was a decade behind the times.” Due to his outdated PC, David played and replayed things like Doom and Chasm: The Rift. This led to him creating concepts in his head for what would eventually become DUSK.

It took a while for David to start working on DUSK, though. With his outdated PC, David began work on titles in QBasic, but the process didn’t work out so well. While he didn’t give up on ever making the title, he eventually shelved it to hone his craft before returning in the future. In the intervening years, he played a bunch of other games that would eventually come to influence other elements of DUSK.

While the games that had the most impact are obviously Doom and Quake, a lot of the atmosphere in DUSK draws inspiration from S.T.A.L.K.E.R. David also personally admits that Chasm: The Rift played more of role in his design due to him playing it more as a teenager. 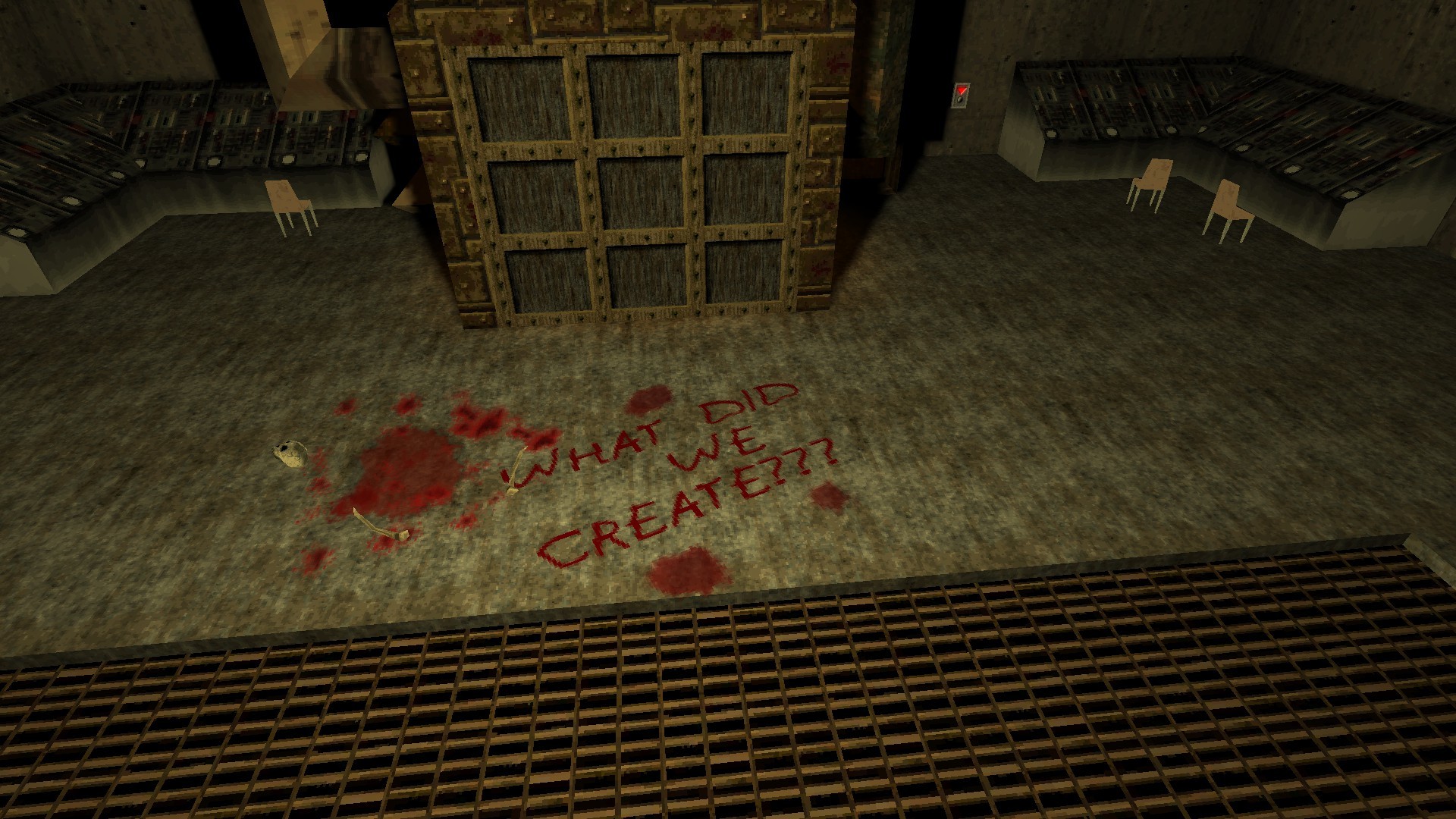 I sadly admitted that I had never heard of Chasm, but Dave Oshry reassured me that, “Nobody has.” He then went on to explain, “for Episode One, a lot of people have been comparing it to Blood and Redneck Rampage, whereas Episode Two is more S.T.A.L.K.E.R. and Half-Life…there’s little bits of all other games sprinkled around there.”

“That’s the dirty secret of DUSK,” David says. “A whole bunch was taken from old immersive sims.” Thief is one game that Dave and David both refer to when saying this, which is definitely felt when playing DUSK. For how immediate the comparison to id Software’s classic titles is, DUSK actually borrows very little from the grandmasters of the genre.

So now that I better understood where DUSK was drawing its influences, what would we be seeing for Episode Three? “There’s definitely going to be new enemies,” Oshry says. “There’s going to be flying guys. We haven’t gotten to annoy you with those yet.” New weapons don’t seem to be on the docket, but a slight reworking of some current weapons is on the table.

Oshry specifically points out the sword, which was kind of a novelty in Episode Two. It was neat, but didn’t do enough damage to really be a viable alternative to the previous melee weapon. “For one level, we take away all your weapons and force you to use the sword in Episode Three,” Oshry outlines. “We’re changing the way the sword works…but definitely new enemies, some new power-ups and more power-ups.”

How will the level design change? “David’s just getting really crazy with the level design,” Oshry gleefully adds. “He’s not constrained by ‘farm area’ or ‘factory area.’ Now it’s just like fucking bleh-leh-luh-leh-luh-leh-la!” Seeing as how Episode Three is called “The Nameless City,” the limitations on what are possible basically don’t exist.

Rewinding a little, I asked where the inspiration for DUSK’s current episodes stemmed from. “For Episode One, that location is completely my wheel house,” David states, “because that’s where I live.” Oshry then jumps in, “He literally lives in DUSK.” 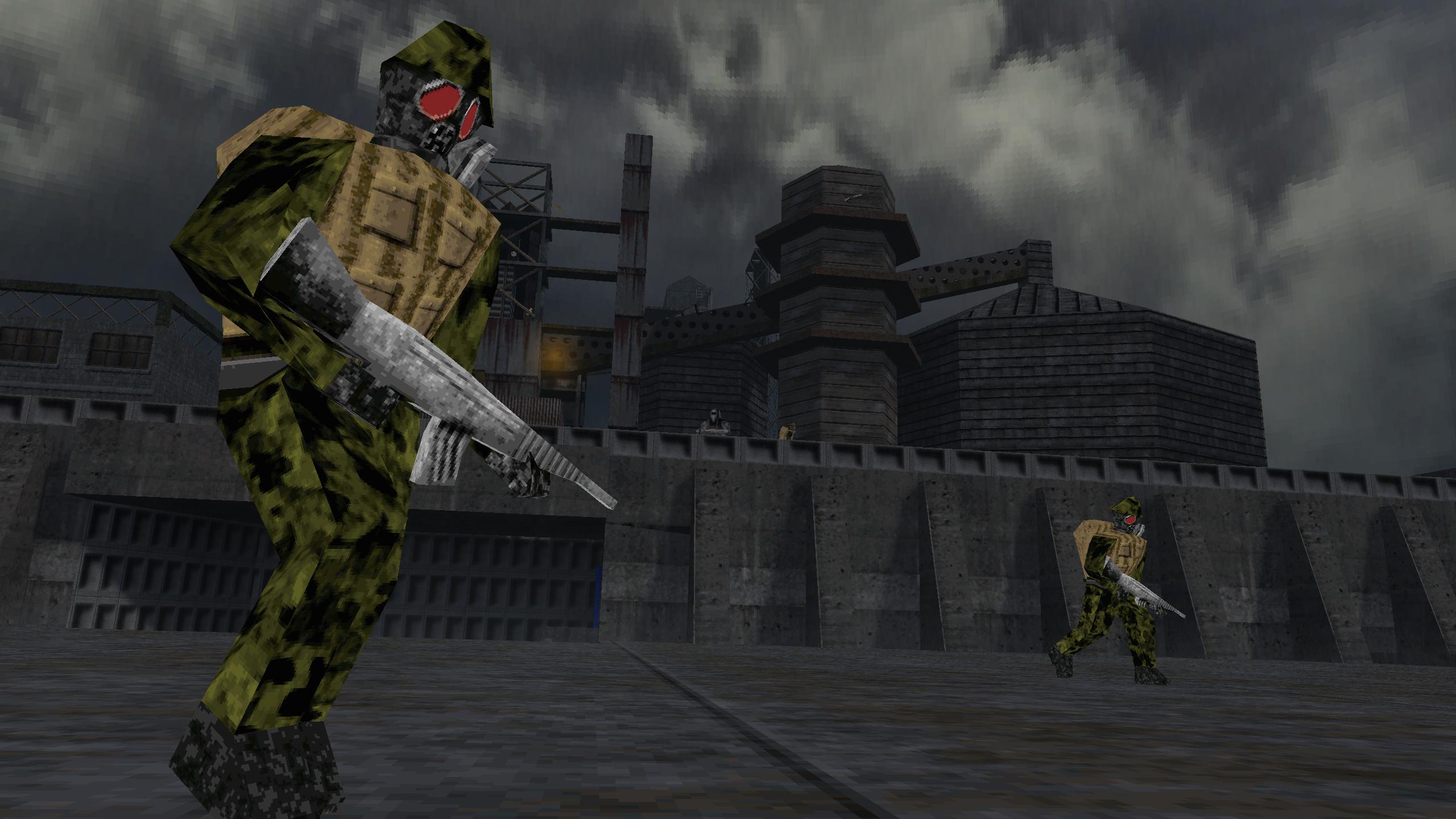 David then elaborated on what he meant. “That was just me driving around, living everyday life and being like ‘that would be a cool place to explore in DUSK.’ Getting onto Episode Two, that’s when I started with each level having a main gameplay or thematic idea. It wasn’t just ‘here’s a cool location,’ but it was like, ‘here’s a cool gameplay idea.’”

Oshry continued by adding, “When David was telling me his ideas for episodes, I was like ‘I think we’re making Cabin in the Woods.’” Oshry then told David to go watch the movie, which then became the catalyst for the whole idea of DUSK having a layered world where the first episode starts mundane before giving way to a secret military base underneath and then almost literal hell below it. 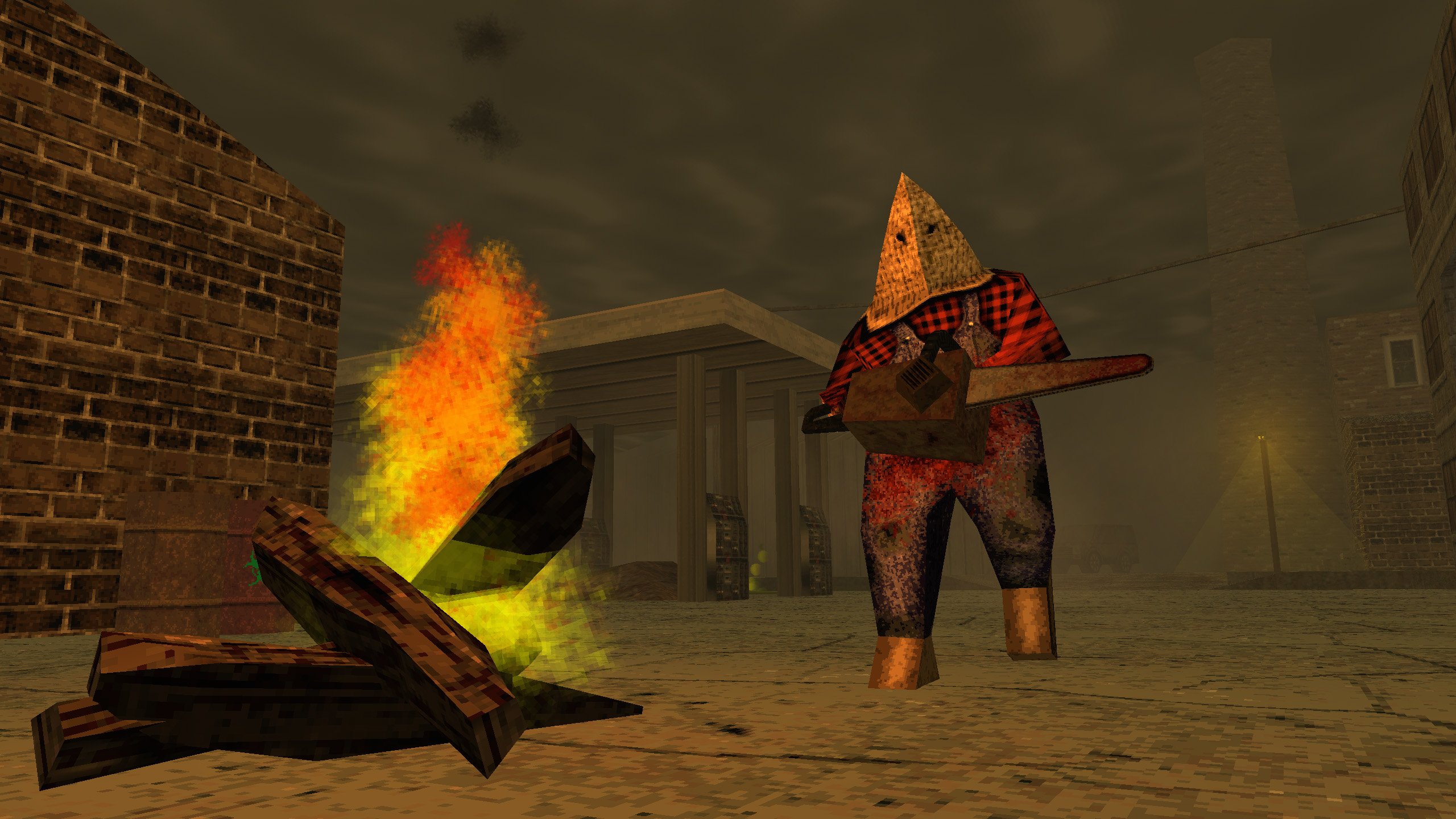 “For me,” David adds, “I especially love the idea in a game like Doom, what you are in is actually a space you can backtrack through and explore and kind of go at your own leisure. There was a real emphasis on making it feel like you were in an actual space and making it interesting to move around that space and giving you different views and angles.”

Both David and Oshry agree that a modern trend with gaming tends to be on infinite replayability through random generation instead of creating specific levels with identifiable set-pieces. While they admit there is something to be said about how that can create new and unique experiences, it isn’t what they are looking for when it comes to classic shooters. To them, DUSK is meant to be memorable and replayable because you find levels that excite you and invite you to revisit them.

Since DUSK borrows the act structure from classic shooters, one of the things I personally wondered about was an eventual fourth episode coming to the title. Doom re-released as The Ultimate Doom a year after with a brand new fourth chapter, a trend that would continue with Duke Nukem 3D and even things like Tomb Raider Gold on PC, so since DUSK is positioning itself as the return of the golden era of shooters, it would only make sense for an Ultimate DUSK to happen. 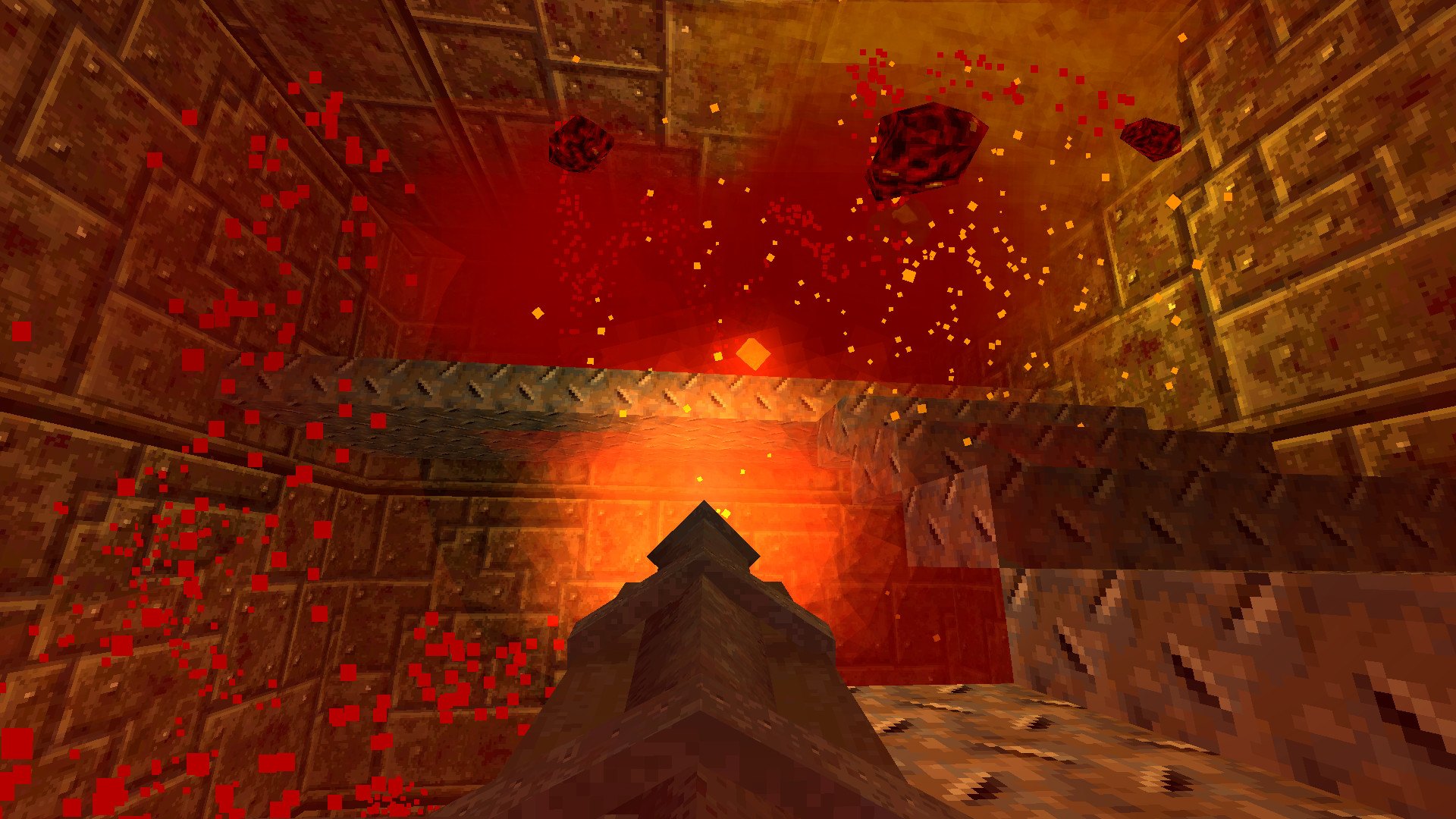 “I mean, if DUSK does well,” Oshry says, “we’ll do whatever the hell you want. We’ll make episode four, five, six, DUSK 2: With Graphics This Time.” For the moment, though, development is focused on getting all of the features that the team promised from the start. This means the final release with Episode Three, mod support, Steam workshop integration, a Mac and Linux port, and even a co-op mode for the campaign.

Since mod support was the only real “complaint” I had about DUSK in my Early Access review, I definitely inquired more about what that would entail. Turns out the team is taking it very seriously. “We’ve got a dedicated guy who comes from the Doom community working on the SDK,” Oshry mentions, “and people are getting prepared to start using it.” David then added, “I can’t wait for mods. It’s going to be so cool to see what people come up with.”

Toward the end of our chat, we began to talk about performance and how DUSK targets a rock solid 144 FPS, but this brought about the idea of console ports. According to Oshry, he is actually starting to finalize a pitch that he’ll be making to Nintendo for a Switch port of DUSK. While Sony and Microsoft haven’t agreed to anything, Oshry doesn’t see them opposing the game for their platforms.

Since DUSK is such an old-school shooter, you’d think that gamepad support would be flat out terrible, but that actually isn’t the case. The game supports a variety of gamepads on PC and it actually ends up feeling pretty smooth. Oshry explained to me that they worked on figuring out an auto-aim system that would emulate the smoothness that DUSK requires. While it obviously won’t match keyboard and mouse control, it does a remarkable job of capturing the speed you’d expect from a ‘90s shooter.

To wrap things up, I asked about what some ideas for a potential DUSK 2 would be like. It is obviously far too early to get any concrete details (especially since New Blood Interactive is looking to support DUSK for the next few years), but David did clue me in to how the game might look. “I don’t know that I’d ever want to do something completely photo realistic, because in five years it’s just going to look like complete garbage. Stylized graphics always age the best.”