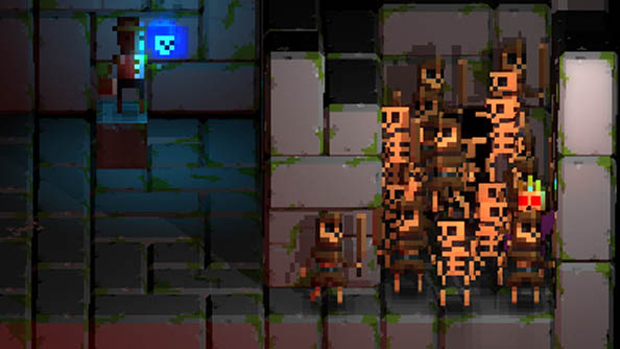 Delve to the bottom of a death pit with your pets

Legend has it that Legend of Dungeon was born from Reddit. Robot<3Kitty, the world’s first married game development team was cruising around the popular aggregate website when they discovered the artwork of Sebastiaan van Hijfte. They fell in love, contacted the artist, and started a modest Kickstarter campaign hoping to raise $5,000 to develop a game to bring those pixels to life. They raised six times that amount, allowing them to bring the game to multiple platforms (including Ouya).

It seems appropriate that the rouge-like beat-’em-up would be buried deep in the darkest corner of PAX East. That didn’t stop Legend of Dungeon from forming a crowd. The humble, charming artwork, beautiful, dynamic lighting, and simple-but-murderous campaign kept players coming back. It even has bathrooms!

Thanks again to Alix for the impromptu interview, and check out the rest of the Talk Fast series for more of PAX East’s best games.