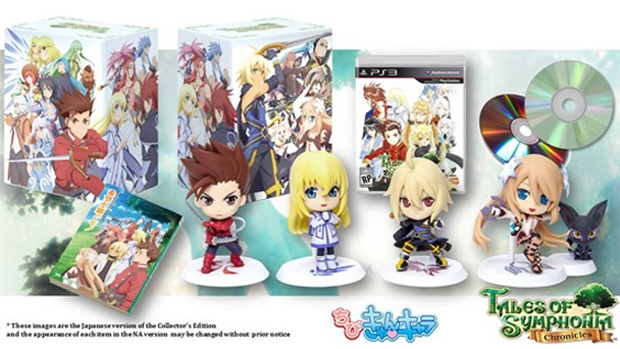 In North America, even!

I’ve only played one Tales game, and it was Tales of Symphonia for the GameCube. It seemed to have just what I wanted, engaging combat and likeable characters in an appropriately insane JRPG plot. Though really, I didn’t much care for Colette; I’m more of a Raine person myself. Anyway, the game quickly became one of my favorites of the system and I’ll still bring it up to this day if given the opportunity.

Now, Tales of Symphonia and its Wii sequel Dawn of the New World are getting a fancy Collector’s Edition in North America! Releasing next year in 2014, this $100 Collector’s Edition for the PlayStation 3 will include HD versions of both games, some chibi figurines, the soundtrack, and a novel bridging the gap between the two games. If I didn’t already own both games, I would be all over this edition of the series. Only 15,000 of these will be sold, so be sure to pay attention to when they go on sale!