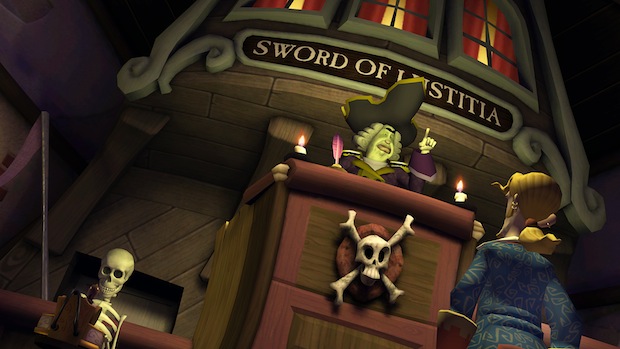 Tales of Monkey Island draws to a close this December with the release of the final episodic chapter on the 8th of next month. Dubbed “Rise of the Pirate God,” Telltale Games has said via a recent press release that the this last chapter will answer “many vexing questions,” foremost of which we hope is an answer as to the real fate of the mightiest pirate ever to wear a hook for a hand, Guybrush Threepwood.

The latest press release plays off of his “purported demise,” and even carries a quote from THE David Grossman:  “[Guybrush Threepwood] wanted what every young man wants — to loot, pillage, and sail the high seas in search of further looting and pillaging opportunities,” Grossman said.

“It’s a great tragedy to see such a productive life seemingly cut off prematurely. And I’m just saying that because he owes me money.”

It’s a bummer to watch the recent MI explosion come to an end, but we’re guessing this won’t be the last we’ll see of the property. Regardless, look out for the fifth and last chapter of Tales of MI in early December.