The following feature contains a spoiler for Telltale’s 2014 title Tales from the Borderlands. Just go play it, because that’s basically the conclusion of this article, anyway.

Or maybe even better…

A couple of weeks ago, I had the displeasure of reviewing Gearbox’s New Tales from the Borderlands. I try to give every game I review the benefit of the doubt, but this game just kept letting me down again and again and again, and in the end it turned out to be a pretty miserable experience — and I gave it a 3/10. The whole time I was playing, I couldn’t stop thinking about how awesome I thought the first game was, to the point that it is one of my favorite games of all time. Before I even finished the first episode of New Tales, I knew I had to go back and see if the original held up in the way that I thought it did.

Turns out Alice Bell over at Rock Paper Shotgun and I think alike, because she had the exact same idea. New Tales from the Borderlands was so bad, it actually made more than one of us return to the original to make sure we hadn’t created some kind of false, reverent memory as a coping mechanism. But the conclusion is the same, and it seems to be unanimous: Tales from the Borderlands is still one of the best stories ever told in a game. A sense of momentum

Right off the bat, the game grabs you. It opens with this mystery of who kidnapped Rhys, one of the player characters, and after a few quips, he launches into a narration of how he got to where he is in the first place. The story gets rolling right away, and it never really slows down after that.

The dialogue is smart and snappy, and perfectly paced while also giving us exposition at the same time. Compared to New Tales‘ slow, clunky exposition dumps, the original Tales’ sharp, focused writing is all the more noticeable. It’s also just funny as hell. There are still bits from this game that I quote to this day, and don’t even get me started on the finger guns fight in Episode 4.

Then there’s the musical opening, and while all of them are particularly great (shout out to the slo-mo rocket launch sequence from episode 4 — the entirety of the penultimate episode is nothing short of excellent, honestly), but episode 1’s heavy beat and funky synth banger “Busy Earnin'” by Jungle is will be one of those gaming moments I remember for the rest of my life. It just sets the tone for the entire series, the song is dripping with style and swag, and it really hammers home the feeling that there’s a whole adventure ahead of you. Perfection. 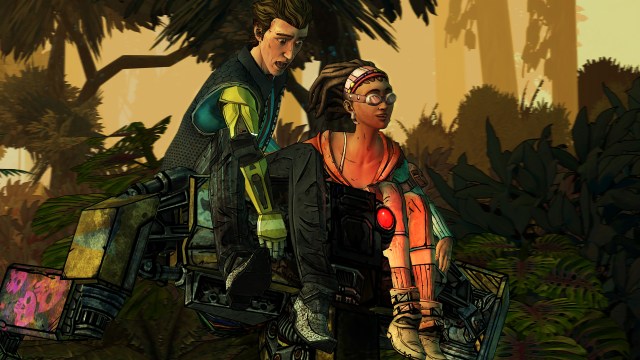 That sense of momentum is maintained throughout the entire rest of the series, except for maybe the last half of the final episode, which I can excuse because it makes way for the most video game-y section of Tales — the final boss fight. Otherwise, the rest of the episodes are jam-packed with plans, obstacles, and random happenstances that send the group reeling, and then we have a blast seeing how they manage to scrape by and eventually come out on top.

One particularly clever story technique they used a few times was having the characters lay out their plan, and then use that to narrate them actually carrying out those parts of the plan, which is just efficient writing in my opinion. They don’t waste a second of my time, let alone hours at a time like another game I can think of.

Right off the bat, we know exactly who the characters are and what they’re after. As their goals slowly shift as the series go on, we can see who they are changing, in real-time, as they react to and deal with the circumstances that are placed in front of them. Of course, you as a player are part of shaping that arc, and the game feels satisfying and reactive every step of the way.

I never understood the criticism of the “they will remember that” messages in the top corner of the screen, especially in regards to Tales. The Telltale devs get awesome mileage out of the mechanic, by constantly changing up how they use it for the sake of jokes, and, more sparingly, impactful emotional moments. 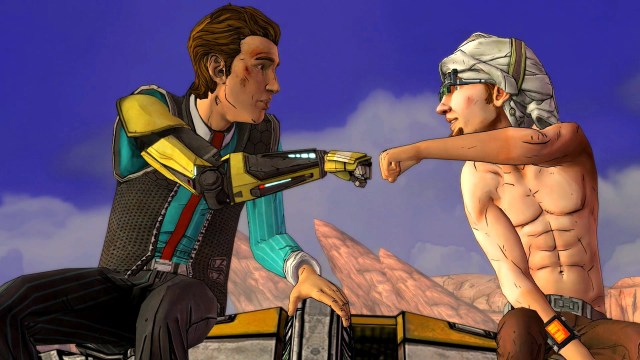 Something else that surprised me when I started Tales from the Borderlands is how often you interact with the game. It’s baby stuff compared to full-on action games, but it might as well have been Breath of the Wild next to New Tales from the Borderlands. You have dialogue choices really often, sometimes as many as three or four choices a minute, and you spend a good amount of time each episode exploring the environment and doing some point-and-click stuff. Again, it’s pretty basic, but it’s far and away more interaction than you get in New Tales.

I also have to take a second to talk about how insanely good Jack’s death scene is. Handsome Jack is already dead as of Borderlands 2, but he makes a posthumous return as an AI living inside Rhys’ head in Tales from the Borderlands. Not only are all of the exchanges between Rhys and Jack excellent throughout the whole game, but their final confrontation is something straight out of Shakespeare’s bibliography, and I don’t say that lightly.

Whereas Rhys started out as nothing more than a fanboy, he’s learned and grown a lot since his first encounter with Jack. Plus, you know, he doesn’t want to die so that Jack can just his body as his own personal meat puppet. That’s less sexual than it sounds. Anyway. 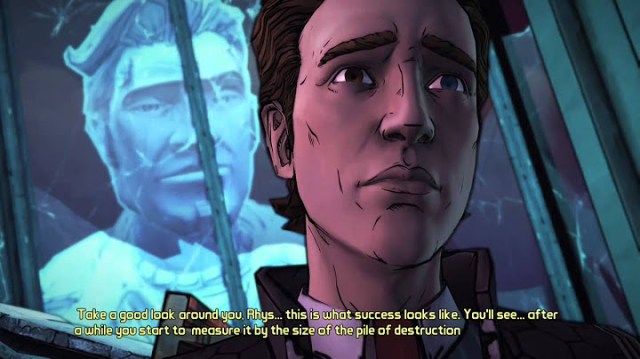 An ultimate confrontation in the wrecked remains of Helios, paired off with expert cinematography, thrilling, existential writing, and stellar performances from Troy Baker and Dameon Clarke make for some of the best storytelling in games you’re ever going to see. I mean, we get Handsome Jack contemplating the true nature of death and Rhys ripping out his own arm and eye to kill his nemesis once and for all. What more could you possibly want? That’s peak drama, baby.

I did not misremember… Tales is the GOAT

Tales from the Borderlands has always stuck in my mind as one of my favorite games of all time, but I don’t think I realized in the years since I’ve played it how much it stuck with me, and even influenced my own writing sensibilities. It’s a fast-paced, ridiculous adventure, but at its core it’s a really moving character piece that manages to give each one of its characters a compelling arc, even outside of the main six cast members.

I could continue to sing its praises for thousands more words, but you get it. Just go play it, and if you’ve played it before, play it again. Telltale was on some next-level shit in the first half of the 2010s, but if you ask me, Tales from the Borderlands is their best work.