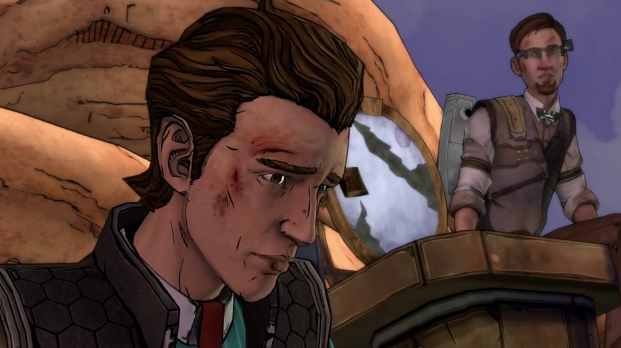 Telltale’s panel came and went with some fun stories of the studio’s journey but nary an announcement of what the developer is doing now. Judging from the comments in just about every Telltale article that goes up, the second episode of Tales from the Borderlands is pretty hotly anticipated. It turns out that the announcement was being saved for Gearbox’s panel.

At the panel, Telltale debuted the trailer for Episode 2: Atlas Mugged. The video should be available to the general public tomorrow. Telltale was reluctant to give an exact release date, but the current plan is for Atlas Mugged to release during the week of March 17, finally continuing the story of the unlikely team of Rhys and Fiona. The duo isn’t in great shape in the aftermath of Episode 1, but they are still maintaining the tenuous partnership.

The delay between the first two episodes was jokingly blamed on Mikey Neumann, who did voice work for this episode in the role of series staple Scooter. Awesome badass Athena was also shown to have a part in this installment.