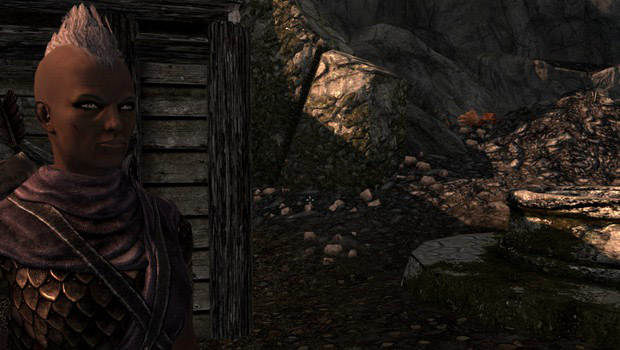 [Last week, I asked you to tell me your best unique story from your playthrough of Skyrim, and we easily broke the record for participation in Blogger’s Wanted. There were TONS of good stories, and I wish I could promote a lot more of them, but there’re only so many days in the week. Our first promotion is from Panzadolphin56, who got a great story out of a tragic case of hair loss. If you missed out on participating on this topic, make sure you get something in for this week’s: Xenophilia. — JRo]

In my travels across the land of Skyrim I have met many colourful characters, wizards and warriors of repute, hunters and tradesmen well-worn by life out on the fringes of society, farmers, soldiers, bards, but never have I met a man such as Belethor, the lowly Shopkeep, and I fear I never shall again.

Belethor was an honest man, a trader of sorts, he’d come to Whiterun to make a living selling his wares. He was a stranger to this land, something I, as a Redguard, could empathise with; It’s easy to long for home when you find yourself surrounded by Nords. Originally I’d come to the lands of Skyrim to chew mammoth meat and to kick ass, but I’d run out of mammoth meat so I used horker instead – in what can only be described as ‘quite a long detour up north’. I ended up staying for the dragons and ladies wearing ridiculous bikini underwear in Arctic conditions, but I always longed for home. I daresay Belethor felt the same.

He set up a little shop in a corner of Whiterun, next to the market filled with an assortment of characters who felt it necessary to remind me of their life history everytime I walked by, and watched over by the cousin of the guard in Windhelm who had to give up being an adventurer after he took an arrow to the knee – who remarkably had had to do the same as his cousin. Here he sold just about everything you could think of – weapons, armour, potions, spells, all sorts of foods and an assortment of odds and ends that one might never even need by day, then by night he’d shut up shop and disappear into the back to enjoy – what I can only imagine was – a lifestyle of hookers and blow (this is Skyrim afterall.)

I’d come to Whiterun to inquire about work, I’d met Belethor a couple of times, sure, but in those days he’d had hair and his shop was less blue. He’d been friendly and eager to tell me his lifestory but we’d never really spoken much. I’d been too focused on training as an archer, wandering around the hills of Skyrim shooting things in the face and then running away when it turned out the level difference between us was too great for me to win. Trading was something I did after the fact, almost on automatic.

I’d come back from one such encounter with a dragon, my pockets full to bursting with dragon bones, dragon bits, and possibly dragon-shaped biscuits, when I decided to stop by at Belethor’s, and that’s when I saw it. Where once a towering man of average height had stood with a magnificent mane of luxuriously matted short hair, now stood a hairless, wrinkled coot missing what could only be described as ‘his eyes’, mumbling the same words my friend Belethor had once said to me.

I realised then, to my dismay, that this was Belethor, though somehow deposed of his hair, and also owning a shop that was now full of a surprising amount of blueness it was that same man. Questions raced through my mind: Had you been attacked Belethor…? Had some cruel fiend done this to you as an act of vengeance against some perceived slight? Or had life got so hard that you’d turn to political extremism to voice your concerns…? Unfortunately I found myself unable to ask these pressing questions. I scrolled up, then down again but found my young Redguard unable to articulate the horror that ate at my heart – no doubt because like me it was too emotional an issue for her to even consider bringing up… – or so I imagine; so instead I just sold him some dragon bones and carried on my way.

What had become of Belethor? Would I ever know…? I knew life involved difficult questions, and life in Skyrim especially, and I’d seen many an odd thing before: men deprived of their bodies and forced to talk and go about their everyday lives as bodiless heads and arms, rabbits that hid under rivers, children that flung themselves across town at random and temples without floors – but this was different. Belethor had been a bro, a compadre, like me he was a foreigner in a land he’d left his home for, and something had taken his hair, and his eyes, from him, and there was nothing I could do about it.

After that we went our separate ways and didn’t really speak – sure everytime I came into his store he’d suggest I take a look around, or see what I wanted in a jovial tone like he had in the old days, but it was never the same and I knew it, he’d lost that fire. That was when I knew it’d come to an end, things had changed too much for us to be friends anymore, maybe an animosity had developed between us because I’d never asked ‘Hey Belly, why you got no hair?’, or maybe the character had just been a dick to begin with and I’d just forgotten about it but whatever the case I knew that I’d forgotten most of the stuff I’d done in Skyrim and that that was pretty sad.

So I went about my business, chasing dragons and shooting giants in the face, even joining a rebellion, but I kept wondering what had happened to him. Belethor grew his hair and eyes back eventually …the next day, but it wasn’t about the ‘details’ of what happened, it was about the pain, the trauma of seeing that guy whose name I totally forgot before I started writing this article without any hair that mattered. Because it was painful, very, very painful.

Perhaps I’ll never know why Belethor’s hair disappeared, perhaps it was a texture glitch or perhaps he thought the hot Redguard character lady I created so cool that his hair literally exploded out of his head. Regardless I will remember Belethor most of all my encounters, not because I liked him – dude really was a total dick, but because seeing a hairless, eyeless guy pop up at random in a game like Skyrim is totally creepy.