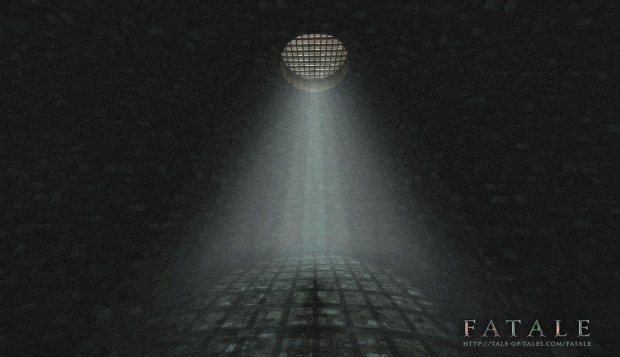 I do not like Tale of Tales’ work, but they so fervently attempt to push against the grain of conventional game design (at least in part by not making actual games) that I feel compelled to buy every new sort-of-game they release.

They released Fatale yesterday for the price of $7, and it’s pretty much what you’d expect coming from them. I actually prefer it over their other works — it utilizes atmosphere in a more intelligent and subtle way than the glorified cut scene that was The Graveyard, and is more engaging on a moment-to-moment basis than The Path — but it still subscribes to the (in my view, ludicrous) philosophy that gameplay and user interaction can’t say anything specific or interesting on their own, and should instead be subservient to noninteractive story bits.

In this case, the story bits revolve around a reinterpretation of the story of Salome. I have literally no idea what to make of the game, thematically (the plot, loosely summarized: you die, you put out candles, you quit the game, you come back and watch a naked chick dance for a while), which I will blame on my complete ignorance of the story of Salome. Still, I dug the atmosphere and the weird, intentionally anachronistic touches Samyn and Harvey sprinkled throughout. Shame about the gameplay, though.