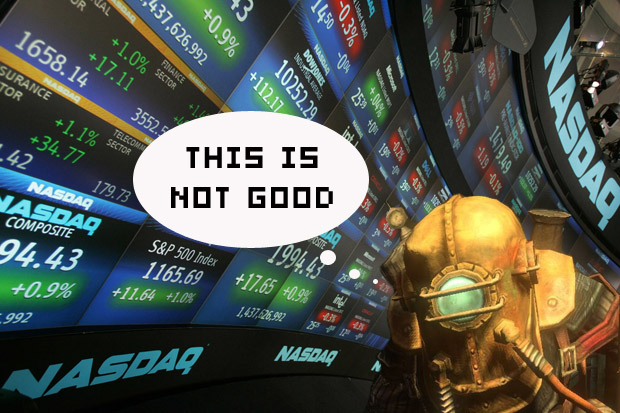 Yesterday’s news that Take-Two would be delaying the release of BioShock 2 to the 2010 fiscal year was a bit of a disappointment — the game was definitely one of the most anticipated of the holiday season. Of course, it wasn’t alone — Mafia II, Max Payne 3 and Red Dead Redemption were all pushed back as well. Take-Two’s Stauss Zelnick commented on the delay soon after it was announced, citing the need for additional development time as one of the key factors. Of course, there’s always that whole competition thing too.

It seems no matter what the reason, shareholders aren’t feeling safe about this little delay. Case in point: per Game Industry.biz, Take-Two’s stock plummeted 13.1 per cent after the announcement was made, dropping from USD 8.98 at yesterday’s close to USD 7.80. Numbers, numbers. All it really means is that investors aren’t feeling so comfortable with the news.

Remember, 2010 fiscal year begins in October, so this doesn’t rule out a holiday release … but it looks unsure right now. Will you be suicidally disappointed if you have to wait until next year for BioShock 2?