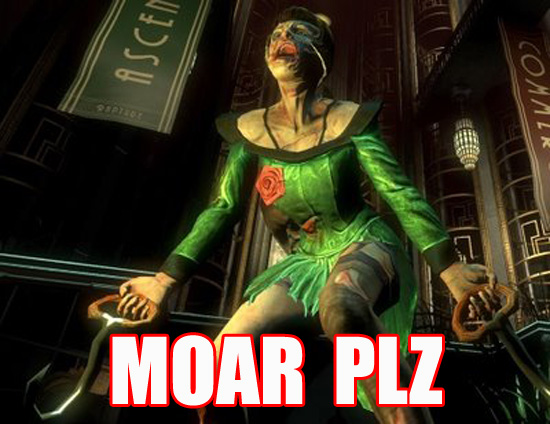 At the mere mention of a BioShock sequel, your average gamer would squeal with glee and dance around wildly. You may ask yourself, why would anyone be against the idea of Metacritic’s favorite title going on to become a series? Before I get on to my rant, let me at leat clarify what I’m rambling about: Strauss Zelnick, Chairman of Take Two, announced in a analyst conference call that there are definite plans to turn BioShock into an franchise. He says of an analyst’s inquiry about how to keep the titles innovative:

“I would say, probably, roughly an every-two-year schedule would be optimal. And if you look historically that has been largely the case with GTA, and I’d expect we’d apply rougly the same strategy to BioShock because BioShock is shaping up to be a very important franchise,” Zelnick said in response to an analyst’s query. “I don’t want to say more than that about BioShock because I certainly don’t want to jinx it, but I feel awfully good about where that’s going.”

He sounds positive, doesn’t he? I envision the bigwigs at Take Two sitting in big leather chairs with visions of cash and world domination dancing about their heads. I’m sure this vision is partially influenced by the idea of the future ruination of my favorite game of this year, so before I enrage the masses, I’ll try to keep my delusions objective here.

I feel strongly that BioShock should not be a franchise. I know it would be a tremendous success and make garbage trucks full of money, but the truth of the matter is there are few titles on the market with the integrity to stand alone. 2K’s aria to objectivism and moral dilemnas deserves to be remembered as a title that transformed the landscape of shooters permanently. As much as I want to go back to Rapture, I think it’s best remembered as it was originally conceived.

[Via Shacknews, thanks Golden Donut!]